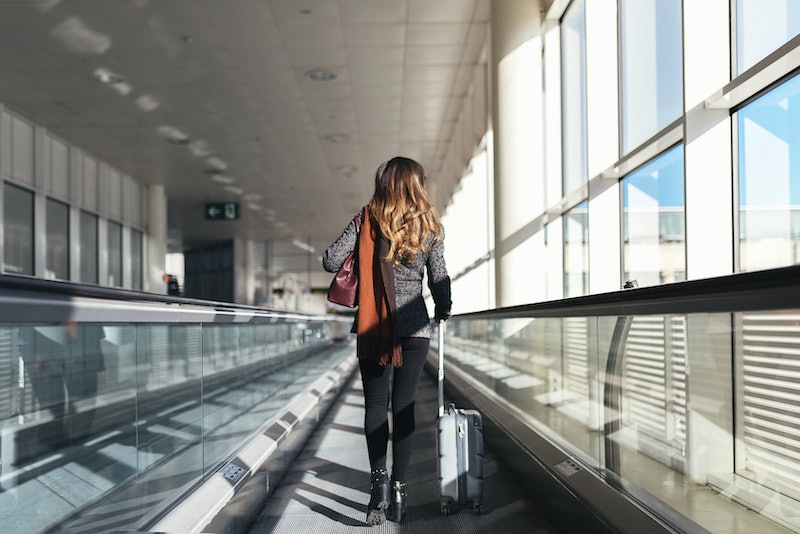 I try my best to be environmentally conscious, but I'm not always successful. Even if you consider yourself environmentally aware and take steps like recycling, driving a fuel-efficient vehicle, or being mindful of your food waste, when you're on vacation, those habits can pretty easily go out the window. The beach resort you're at may throw a plastic straw in every drink you get, and let's not even start with air travel's carbon footprint. So it shouldn't be terribly surprising that new study has found that tourism is way worse for the environment than previously thought.

The study, published in journal Nature Climate Change, found that travel could account for 8 percent of greenhouse gas emissions, which is four times higher than scientists had estimated in the past. The researchers say the U.S., China, and India have the largest carbon footprints in the world, and travel is to blame for a significant portion. What makes travel so bad for the environment? Researchers say everything from transport to shopping to the environmental impact of building a hotel can affect an area's environmental health.

Also worth noting — nations with fewer people should have less of an environmental impact, but tourists can drive up greenhouse gas emissions. The Maldives, Mauritius, Cypress, and the Seychelles are all smaller nations, but their destination-based carbon footprints are high, and international tourism is responsible for anywhere between 30 percent and 80 percent of CO2 emissions. The researchers also found that carbon footprints increase with wealth because people with higher incomes tend to travel more. "We project that, due to its high carbon intensity and continuing growth, tourism will constitute a growing part of the world’s greenhouse gas emissions," the study says.

It's complicated. The tourism industry is a huge source of income for both developing and developed countries — according to the International Labour Council, tourism created 107 million jobs in 2015. It makes sense that cities do everything they can to attract tourists, as it directly impacts the local economy in a positive way. But the study says that tourism development comes at a cost, and "a pursuit of economic growth comes with a significant carbon burden, as tourism is significantly more carbon-intensive than other potential areas of economic development." If countries are hoping to increase on an economic scale, they have to realize that tourism increases will also bring potential downsides.

The World Tourism Organization, a United Nations agency that focuses on sustainable and responsible travel, has recommended that travelers rely less on flying and more on public transportation — but this study says that there have been limited results, even when people are traveling sustainably. To put it plainly, even if you're doing your best to be a responsible traveler, tourism's environmental impact is still increasing steadily with no signs of slowing down. So what does this mean for people who want to be environmentally conscious, but also enjoy seeing the world?

You're likely not going to cancel your upcoming plane tickets because of these findings, but this research suggests that all of our globetrotting isn't exactly sustainable long-term, especially when the U.S. is already making cuts to climate change funding and research. Their solution is to move the burden from the traveler to political leaders by introducing carbon-based taxes.

If you are vacationing, you can take steps to reduce your own carbon footprint. Packing meals, avoiding plastic and using public transportation are all things that can help you be more sustainable, and encouraging your friends who travel to do the same can't hurt. It's important to be aware that the only real solution seems to be traveling less and encouraging national governments to prioritize CO2 emissions. Otherwise, our vacations may seriously damage the world around us in the long run. Summer is filled with vacations, weddings and graduations for me, but I'm now considering the ramifications of my trips.

Correction: An earlier version of this article misidentified the journal in which this study was published, and it has been updated to correctly identify the journal.

More like this
Expert-Approved Hacks For Packing A Carry On
By Jessica Goodman
Where Was 'The Bachelorette' Season 19 Filmed? More European Destinations Are On The Way
By Radhika Menon
25 Things I've Reduced My Life To, In Addition To WFH In My PJs
By Ginny Hogan
The Spiritual Meaning Of The August 2022 New Moon
By Nina Kahn
Get Even More From Bustle — Sign Up For The Newsletter