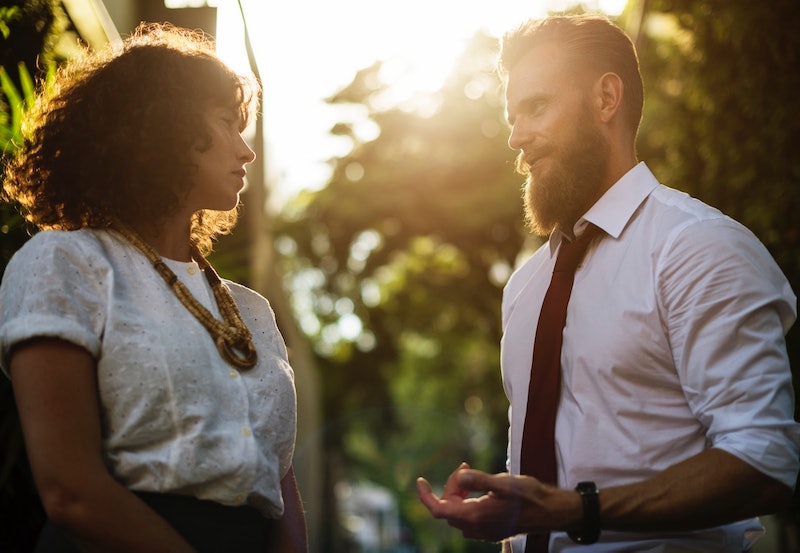 If you're a woman or non-binary person, you've likely had the experience of suggesting something that has fallen on deaf ears. But, when the same idea is later expressed by a man, it's heralded as brilliant. Now, there's a word for that: Hepeated. What does "hepeated" mean? Hepeated just might be the new mansplaining, and it happens when a man repeats your ignored idea, and everyone thinks he's a genius. Nicole Gugliucci, a social advocate and professor, took to Twitter to explain the term. "My friends coined a word: hepeated," Gugliucci tweeted. "For when a woman suggests an idea and it's ignored, but then a guy says same thing and everyone loves it."

This happens to women and non-binary people all of the time, especially at work. I know it's personally happened to me. I once threw out an idea at a meeting that was dismissed by the group only to come to work the next day to find out they were running with an idea that my male colleague had pitched, which was the exact same idea I had suggested the day before. I was so stunned that at first I began to question whether I had imagined coming up with the idea the day prior.

Hepeating differs from mansplaining, which is when a man explains your experience to you in a condescending or patronizing manner because clearly you are incapable, as a woman, of understanding it yourself. You get hepeated when a man takes something you said, repeats it as his own, and takes the credit.

Here's how to use the word hepeated, which already has an entry in Urban Dictionary. "Ugh, I got hepeated in that meeting again." Or, "He totally hepeated me!" Gugliucci explained on Twitter. "If anyone tries mansplaining why that's 'not a big deal,' you will be publicly shamed. Just warning you. Anyway, enjoy your new word!"

So many people can relate to the experience of being hepeated that Gugliucci's tweet currently has more than 130,000 likes and over 45,000 retweets. While both hepeating and mansplaining have been around since the dawn of time, and the concept of mansplaining was even written about more than 100 years ago in the Sept. 1903 issue of The Atlantic, mansplaining wasn't coined until 2008 when Rebecca Solnit published her essay, "Men Explain Things To Me."

Though it's only been 36 hours since Gugliucci's tweet, hepeated is already going viral, and people are posting examples of hepeating on Twitter.

Clearly it happens all of the time in politics, but you already knew that.

While Gugliucci didn't expect her hepeated tweet to take off, she told the Huffington Post that she's glad to have a platform to have these types of conversations with others who can relate. "You never know what random thing is going to go viral. I think it’s interesting women and people of color are recognizing these things, and it’s great they have a tool like Twitter to share their stories.”

While she calls it interesting, I think "telling" is a better word. Another Twitter user pointed out that when any person of color suggests an idea that doesn't gain traction, once that same idea is hepeated by a white person it can take off.

Despite both hepeating and mansplaining being rampant, feminist legal scholar Kimberlé Crenshaw said in USA Today that, "The power of men to decide what the world is going to look like, what counts and what doesn't, hasn't really been terribly disrupted in a generation."

One example of the effect hepeating is the viral Twitter thread from earlier this year that explored what happens when a man and a woman trade email signatures at work for a week. Except in this example the man, Martin R. Schneider, experiences what it's like to share his ideas and expertise with clients who think he is his female coworker, Nicole Hallberg. While Schneider was surprised at the results, women were not at all shocked to learn that his ideas were less well received, and his exchanges with clients became much more difficult when they thought he was Hallberg.

"More than just the experiment, I learned mostly from just listening to women when they told similar stories," Schneider told Bustle in March. "What changed the most was that I became more attuned to watching how other men interacted with women at work, and used that to sort of self-monitor."

So, how can we make men aware when they've hepeated women?

After all, it's not in their self interest to admit that they actually took an idea from someone else, and to give that person credit. However, it is the right thing to do.

The only way to make men aware of hepeating is to point it out over and over again. Eventually they will hepeat it.

More like this
RushTok 2022 Is Here & TikTok Is Just As Obsessed As Last Year
By Sarah Ellis
Myra Magdalen Is TikTok’s Queen Of Chaotic Maximalist Fashion
By Sophia Moore
TikTok’s #NapkinChallenge Is The Chaotic Good You’ve Been Missing
By Sophia Moore
What Does POV Mean On TikTok? The Popular Acronym, Explained
By Emma Carey
Get Even More From Bustle — Sign Up For The Newsletter