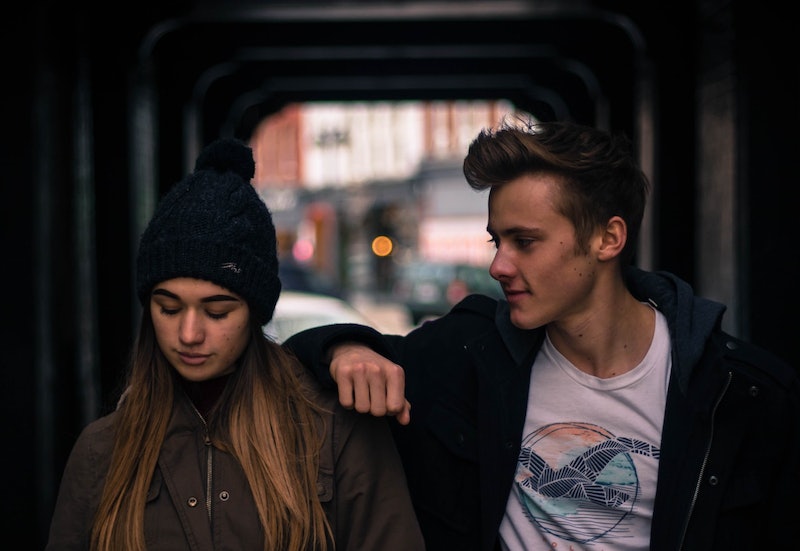 There's nothing quite as infuriating as encountering a mansplainer. This person, usually a man, likes to explain your experience to you in a condescending or patronizing manner because clearly you are incapable, as a woman, of understanding it yourself. Things that have been mansplained to me as a woman run the gamut from women being catcalled on the street to why a woman isn't qualified to be president of the United States, and everything in between.

Most women, and non-binary people, experience mansplaining on a fairly regular basis. And many times, the mansplainer does not have any actual facts or personal experience to back up their argument, which makes it all the more frustrating.

Though the word wasn't coined until 2008 when Rebecca Solnit published her essay, "Men Explain Things To Me," mansplaining has been around since the dawn of time, and was even written about more than 100 years ago in the Sept. 1903 issue of The Atlantic.

The article, "Why Women Do Not Wish the Suffrage," by New England Theologian Lyman Abbott, details why women who did not speak out in support of women's suffrage were in favor of perpetuating patriarchal societal model. Because these women decided not to speak, and he actually doesn't know what they think, Abbott decided to speak for them.

Here are some things that have been mansplained to me as a woman.

I recently got into a discussion on Facebook with a male friend I have known for more than 20 years about a women's right to choose. My friend is in favor of banning all abortions because he fears that if he got a woman pregnant, and she chose to have an abortion without telling him, he could lose out on his opportunity to be a dad.

I tried in vain to explain to my mansplaining friend that educating himself about birth control options is the most effective way to make sure he does not find himself in this scenario, and that restricting people's access to free and reliable birth control is a violation of their basic human rights.

I advised him to talk with any potential partners before having sex to make sure they were both on the same page about what they would do in the event of an unplanned pregnancy. And, even if he does do all of this, his partner still has the right to decide what to do with their own body. A person who has become pregnant should never be made to carry on with a pregnancy they do not want.

His bottom line? He still wanted to keep everyone from accessing their basic human rights for a scenario that is unlikely to occur, despite the fact that this would restrict people from accessing all types of abortions for any reason. He then tried comparing this to a man having a vasectomy, claiming that this is not legal without a wife's consent if the man is married. This is not true.

In the end this argument wasn't getting me anywhere so I decided to disengage from the conversation. The idea that cis-gender men can dictate what others should do if they become pregnant, despite the fact that they will literally never experience being pregnant, is ridiculous. But since he was never going to see my point of view, we went our separate ways.

One of male Facebook friends, who is also an avid fitness advocate, said men experience the same treatment. Um no. I explained to him that men almost never feel physically violated, threatened, or unsafe while at the gym, or running outside.

He responded by saying that women in the U.S. should stop complaining about how bad they have it because women in other countries have it far worse. OK, I will acknowledge my privilege here and say that women in this country do have it better than women in many other countries, however that does not mean we should stop fighting for total equality, or that we should be grateful for, and tolerate sexual harassment.

Most cis-gender men will never know how unsafe it can feel to simply walk down the street. They will probably never be harassed while dining alone. They're not going to be afraid to get into a cab at night. And, they will probably not be assaulted, or even killed, while exercising simply because of their gender.

When I was in my 20s I was managing editor of a group of weekly newspapers in New England. The person who had the job before me was male, and at least 25 years my senior. He had worked there for many years, and not everyone in the community was happy about the new editor — me.

The most ridiculous (though far from the only) example of mansplaining at work during this period is when an older man came into the office to pitch a story to me about the price of milk at a local gas station. The milk cost too much, he claimed, and I should send one of the reporters to write a story about this injustice.

I listened to him, and them explained that I didn't really think there was a story there, and I told him if he really felt strongly about it he could write a letter to the editor, which I would publish. This did not go over well. The man called me "little girl," and he told me I was too young to understand things, and was clearly incapable of doing my job.

Women are often forced to shrug off blatant mansplaining at work, as is detailed in this story about what happened when a male and female co-worker switched email signatures for a week. Having to stand there and listen to a member of the community berate me in front other people because he wasn't getting his way was infuriating. Not being able to respond the way I wanted to (by telling him to screw off) felt even worse.

What Do You Do About It?

I wish I didn't have these stories, and many more like them. I do know that not all men are mansplainers. I grew up with four brothers who never made me feel less than because I was female. I watched my mom get berated by her boss while I hid under desk when I was 5. I vowed that this would never happen to me.

And, while I have never experienced what she went through as a woman in a male-dominated field in the '80s, I have been sexually harassed at more than one job. Unlike my single mom, who desperately needed to keep her job to support us, I don't have kids, and I could choose to leave these jobs. In the '80s, sexual harassment was still a very acceptable part of the workplace, and leaving her job would likely not guarantee that my mom wouldn't experience the same thing at another one.

Finally, I know I can't control mansplainers, but I can control how I respond to them. I can speak up when it happens, I can challenge them, I can ask them questions, I can let them know that mansplaining is a real thing — and they are doing it, I can lean on my friends, and I can simply walk away.

The road to equality is long and winding, but it is paved by the women who have come before me. I owe it to them, to you, and to myself to keep fighting.