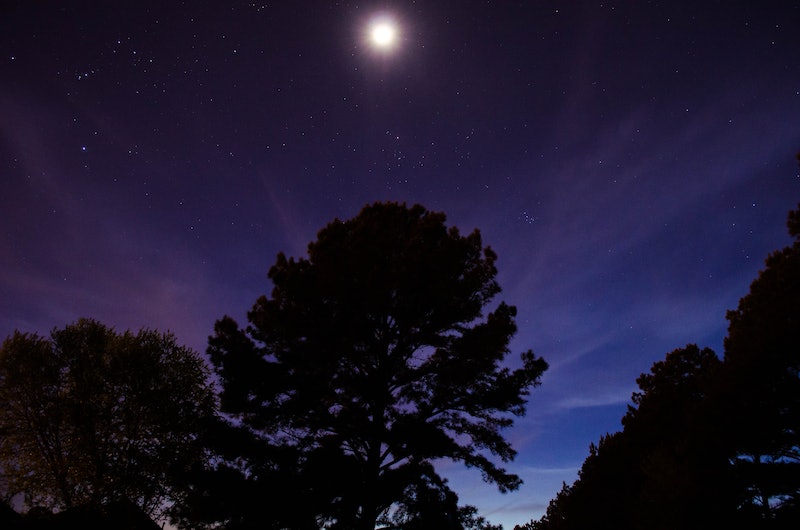 On Oct. 5, the full moon (which also happens to be 2017's Harvest Moon) will rise in Aries, and astrology experts the internet over seem to agree: it's going to kick off a period of intense decision-making and emotional expression for all signs. But, what does it mean if a full moon is in Aries? Six months ago, the new moon was in Aries, giving us all the opportunity to start sowing the proverbial seeds of all those decisions and feels. Now, with the full moon upon us, it's time for us to see what those seeds grow into — and it's going to take some serious impulsivity and a lot of caution thrown to the wind to get that clarity.

According to astrology site Forever Conscious, "with the October full moon in Aries, we are being asked to step up, take action, and start claiming back our lives." The last few months have been a season of resting, thinking, and deciding which elements of the past to let go of (see ya later, toxic relationships!). With that time to internalize behind us, the cosmos will now call on everyone to let their inner fire signs show. An Aries full moon tends to encourage impulsive, passionate behavior — which is exactly the kind you need in order to weather the emotions and fork-in-the-road moments that are coming your way courtesy of the lunar cycle.

Cafe Astrology writes, "This full moon is all about emotional declarations. Something has been building inside of us, likely of a personal nature, and now is the time when the energy of the cosmos fairly demands that we let it out." OK, cosmos, if you insist...

What's important to remember here, though, is that the same universal forces that are driving you to let your emotional flag fly are working on the people around you too. You can expect major announcements and long-mulled-over confrontations to come your way any day now, so be prepared. Unfortunately, the general intensity you're feeling as a result of the Aries full moon may make it difficult for you to be on the receiving end of these conversations. You'll need to remind yourself to be a little more thoughtful before you respond so that you can fight against the fire sign tendencies that are making themselves known these days. As Tarot.com puts it, "Aries moon drives fire into the atmosphere, stimulating life force and vitality. You're alive, filled with your own thoughts. It's all about you today. Trouble is, everyone else is in the same place." With all of these factors at play, you can probably imagine that the potential for conflict is higher than usual during this period, so prepare to hedge your reactions and take a beat before you start swapping passionate insults.

So, what's the upside of the full moon in Aries? It's not all bad news, I promise. As a result of this cosmic activity, you can expect to feel a lot of energy around tackling obstacles and going after what you want. Plans you've been making for months to tackle big goals at work or to pursue a new relationship should suddenly start to seem less daunting. Challenges aren't going to disappear — as discussed above, you may even find that the Aries full moon behavior of those around you throws an extra wrench or two in the mix — but you'll feel more inspired to overcome them than usual, and you'll have the passionate energy from the stars behind you as well.

As far as relationships go, this full moon should be one of balance. You and your significant other, if you have one, will probably struggle to strike a healthy mix of independence and companionship and to meet each other's needs (remember that we all have a fire in our belly right now!), so be prepared to work harder on achieving those compromises. Don't be afraid to express your emotions. Openness will make it easier for your partner to give you what you need, and it will keep you from fighting against your Aries instincts to let things out of your system.