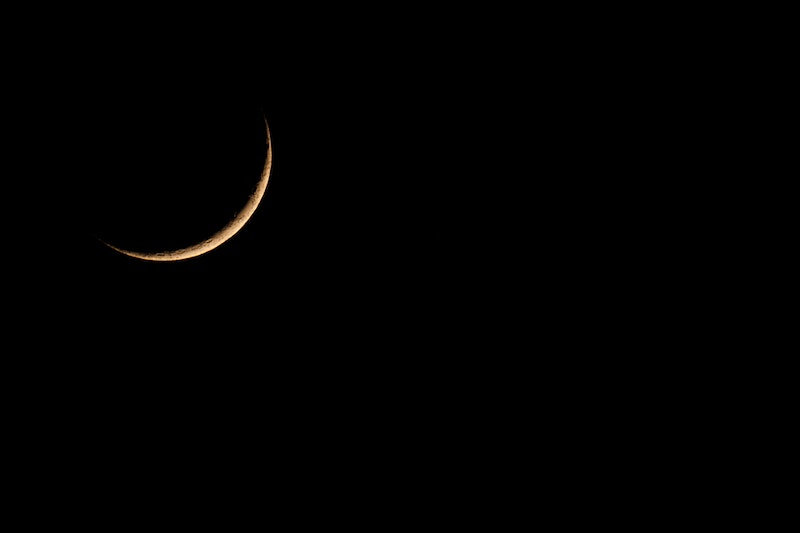 On Friday, Apr. 5, you may notice that the night sky seems a little bit darker than usual. There's a reason for this: it's the night of the April new moon, which signifies the beginning of a brand new lunar cycle. While the full moon is huge and bright, a new moon is typically so tiny and thin that it almost looks like there's no moon at all. But while their appearances differ pretty drastically, the new moon and the full moon are alike in some ways: they are the two most important parts of the lunar cycle, the two stages that have the most effect on us down here on Earth. This new moon is rising in Aries during Aries season, a bold and passionate sign that will surely impact us all. But what does it really mean when a new moon is in Aries? It's pretty interesting to find out.

In general, a new moon represents new beginnings, as it is the beginning of a new lunar cycle. A new moon is a good time to start on a fresh project you've been thinking about or to do something different. The energy is generally more positive and less emotional than a full moon, and you may feel inspired to bring some changes to your life. This energy is made even more intense by the fact that it's happening in Aries. Aries, which is the first sign in the zodiac, is all about new beginnings, taking on something fresh, and not being afraid of change.

An Aries is known for being a bold and energetic risk taker, and these traits may rub off on as a bit during the positive energy of the new moon. You may find yourself having a little extra courage to do something brand new that has scared you in the past. Of course, the new moon isn't going to make you into a different person, but that energy could be motivating for you! This could be the time you've been waiting for to start on something fresh.

According to Astrology.com, the energy from this new moon in Aries many also start just a little bit of trouble as well. Aries are so courageous and open that sometimes they're a little, well, too open. They have a tendency to be super impulsive, doing or saying things without thinking them through long enough to really consider the consequences. During the time of the new moon, we'll all be more likely to take part in that kind of behavior, so be careful about being too reckless!

There's something else to consider, too: this energy could make everyone more focused on themselves. Tarot.com says, "Aries Moon draws fire into the atmosphere, stimulating life force and vitality. You’re alive, filled with your own thoughts — it’s all about you today. Trouble is, everyone else is in the same place. Imagine a playing field with plenty of loose cannons. That’s the Aries Moon transit." That can definitely be a little scary to think about! Try to remember that while it's fine to focus on yourself at this time, you should consider the needs of others around you as well, if only for a little balance.

Overall, though, this is really your time to do something different, put yourself out there, and try something brand new. There's never been a better time for you to take on a challenge head on and to really go for it. Those plans you've been mulling over but are unsure about? Wait for the powerful energy of this new moon to get them going. It's exactly what you've been waiting for.