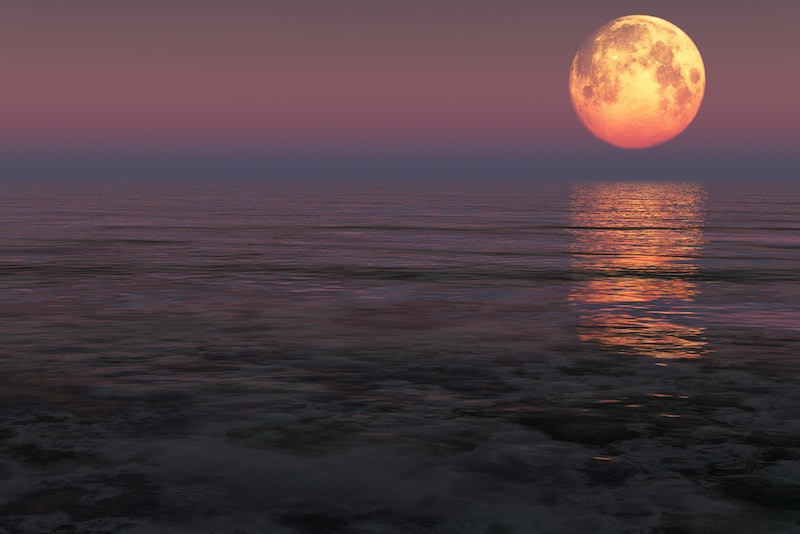 The first two full moons of 2019 were both supermoons, and March is going to continue that streak — Mar. 20 marks the third supermoon of the year, which is pretty special. A supermoon, which basically means that the moon is at its closest point to Earth in its elliptical orbit, generally looks larger and more bright than your standard full moon — and it could also mean a more intense effect on all of us. But, as usual, there are a few zodiac signs that the March 2019 full moon will affect the most.

There's another reason this full moon is special: according to the Farmer's Almanac, this full moon reaches its peak on the same day as the Spring Equinox, which also occurs on Mar. 20. The last time these two events coincided this closely was back in the year 2000, and the last time they occurred on the same date was back in 1981. This month's full moon is called the Full Worm Moon, a term that comes from old Native American tribes. It refers to the fact that, around this time of year, the ground becomes soft enough for worms to start popping out, which is a sign of spring. So, the fact that it's happening on the same day as the Spring Equinox is pretty powerful.

This full moon will rise in Libra, the sign of relationships. Full moons have a tendency to make us all feel a little more emotional and moody than usual, and according to The Dark Pixie Astrology, this one will also make us feel more focused on all of the relationships we're part of, whether they're romantic, platonic, or about family. We may feel a stronger connection to anyone who supports us and makes us feel good — and anyone who doesn't may lead us to feel out of balance. We're going to feel particularly focused on how we're connecting with other people, which should lead to some interesting situations.

Bustle spoke with astrologer Lisa Stardust, who explains, "This luminary focuses on committing to new financial plans and relationships — which will strengthen older standing ones and allow us to see the beauty in new friendships and romances." If you're curious as to whether or not this full moon is going to affect you in a more intense way, take a look to see if your sign is included: