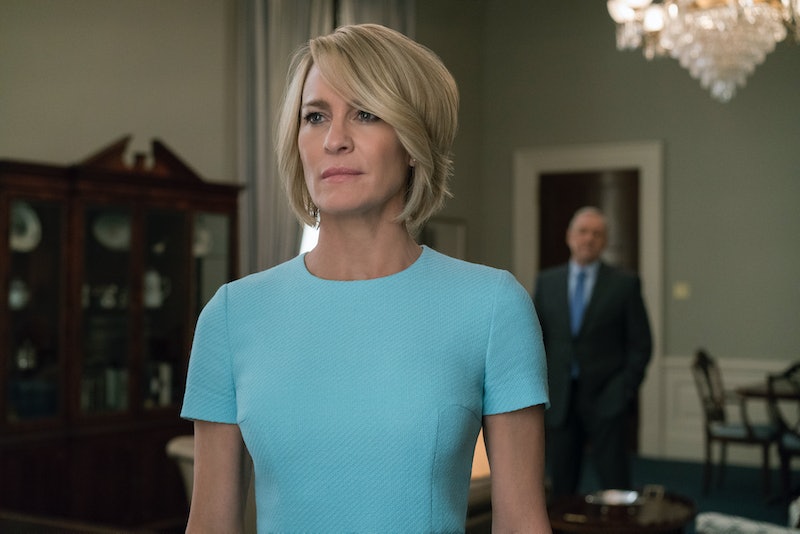 There's some major twists in Season 5 of House of Cards, there's no doubt about that. If you're a fan of the show, then you know that one of the biggest twists was not the death of a character, but the (spoiler alert) implications stemming from Claire breaking the fourth wall in House of Cards, doing so just as easily as her husband. Breaking the fourth wall has been an accepted part of the series for years, something that has been used by Frank to draw audiences further into the narrative; now, it would appear that we have also been pawns in the Underwoods' games because Claire's fourth wall break also comes with the reveal that she always knew we were watching.

The big moment happens late in Season 5. and it's a blink-and-you-miss-it kind of thing. Early in "Chapter 63," as Claire searches around the White House residence for Frank, she stops in the hallway and immediately faces the camera. "Just to be clear, it's not that I haven't always known you were there. It's that I have mixed feelings about you. I question your intentions and I'm ambivalent about attention. But don't take it personally. It's how I feel about most everybody." Boom. Mic drop. She exits the camera frame as easily as she entered it. I mean, that's a mind-blowing reveal and it happens so coolly on Claire's part.

Now, we've seen Claire break the fourth wall once before, at the end of Season 4. While she turns and looks into the camera, she doesn't say anything. I remember getting excited by this little flourish because I expected Claire to do it more frequently in Season 5. When it took damn near the whole season for her to actually do it again, I began to wonder what it means.

Claire tells us in this Season 5 break that she knows we're watching, eagerly anticipating what will happen next, but she doesn't really feel the need to engage with us. This indicates that the audience, just like the other House of Cards characters, are people to be used for Claire's own plans at some point. She doesn't want to give too much of herself away because unlike Frank, who readily divulges his personal thoughts to us, she might have something bigger planned that requires us not exactly knowing how to read her; she wants to keep us on our toes. Frank might have shown his weakness is keeping us in on his secret thoughts if it turns out Claire is using us to her own advantage.

The fourth wall break also indicates (to me, at least) that Claire is really going to go assert herself in Season 6. She has asserted herself before, like when she announced she was leaving Frank in Season 4 after feeling like she had been repeatedly demeaned and dictated to. Now that she is President and Frank is out of the way, it feels like she now has the tools to be as powerful as her husband and yet somehow do it better. She has clearly known when he was breaking the fourth wall, including times when she was present in the room as he did it. This indicates she may have been studying him and attempting to learn how to use this narrative trick better than he did. Very tricky, Claire.

This fourth wall break is major for Claire and indicative that she is finally just as powerful and capable as Frank. If she can do anything he can do, including break the fourth wall, then it's best we keep our eye on her. She's most likely going to make some big moves with this power in Season 6.