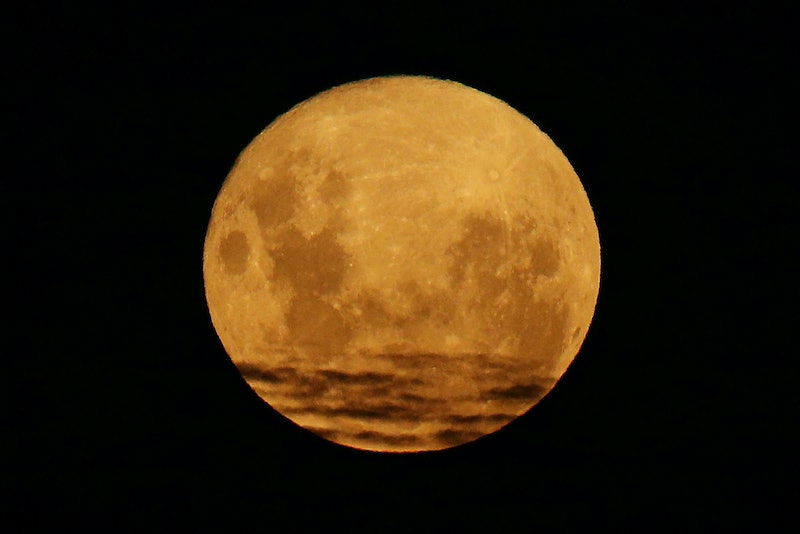 Full moons always seem to be closely connected to our emotions. Under the glowing rock we call the moon, everything seems to be illuminated. Including all our feels. Prepare your stay-calm meditation playlist now because the July's full moon will be in Aquarius on Jul. 27. What does it mean when the full moon is in Aquarius? The July 2018 Blood Moon will have us all feeling ~all~ the feels. It's forecasted to be an emotional one, friends.

July's full moon isn't just any ordinary moon. It's also a lunar eclipse — in fact, the longest lunar eclipse of this century, lasting one hour and 43 minutes, according to Space.com. Astrologers are predicting that the eclipse will intensify the emotions brought on by the moon. Don't worry, though — the full moon in Aquarius suggests a happy ending before rolling the credits.

Aquarius is the humanitarian sign that's all about bringing everyone together. According to Tarot.com, "The community-conscious Aquarius Full Moon reminds us that we are part of something larger than ourselves, and that acting on our ideas and ideals will benefit everyone." It's also noted that because Aquarius is known as being one of the most outgoing in the zodiac, energy is also typically high. And in the case of an Aquarius full moon being coupled with a lunar eclipse, feelings can peak.

Eclipses tend to intensify any current energies. Astrology King explains, "With a total lunar eclipse in particular, the blotting out of the Moon represents a resetting of your emotions, clearing away the emotional baggage of the previous six months." While emotional baggage seems like a hurdle the size of Everest to overcome, conquering it will eventually lead to your ~higher purpose~.

Forever Conscious cautions, "Emotions are likely to be high, and there may be some big developments. Secrets may be revealed, or tensions that have been bubbling beneath the surface may overflow and need to be dealt with." No matter if the emotions are excruciating or just a little sharper than usual, there's nothing to dread about dealing with them. Forever Conscious reminds us that, "Eclipses have long been revered as powerful omens, but they are really nothing to fear. Instead we can look at them as powerful messengers from the Universe and an opportunity to be shown the path forward." Think of it as a compass spinning out of control and then landing, matter of factly, in the right direction.

An Aquarius moon might make the mood more spontaneous. However, paired with a lunar eclipse conjunct Mars, the urge for spontaneity can make feelings akin to fireballs. Astrology King advises that emotions can actually be more along the lines of "impulsive". Which, essentially, is a more fiery way of saying "spontaneous". When feelings begin to bubble like lava in a reactivated volcano, try to relax. July's Blood Moon won't be as intense as the name makes it sound.

We can all stay calm during this astrological spectacle — with 5 planets retrograde and a lunar eclipse that's also a full moon — by reminding ourselves to go with the flow. As Forever Conscious phrases it, "listen and check in with your surroundings." What needs to be chucked out of your life like that Algebra textbook at the end of 7th grade? Full moons are about completing a cycle. With the emotional closure we get with July's full blood moon in Aquarius, a clear path has the opportunity to be paved.

July's full moon in Aquarius, also known as the Blood Moon, will intensify our emotional energy. It might feel like we're all living in the second act of a Nicholas Sparks novel-turned-major-motion-picture but once we've moved past the emotional climax — and remained calm instead of impulsive — we'll all get our satisfying ending.

More like this
Libra & Aquarius Can Be Great Together, As Long As They Do One Thing
By Kristine Fellizar
Everything You Need To Know About Angel Numbers
By Nina Kahn and Brittany Beringer
Angel Number 1144 Wants You To Look Forward To New Beginnings
By Kristine Fellizar
You Can Get Custom Podcast Recs From Spotify Based On Your Zodiac Sign
By Brittany Beringer
Get Even More From Bustle — Sign Up For The Newsletter