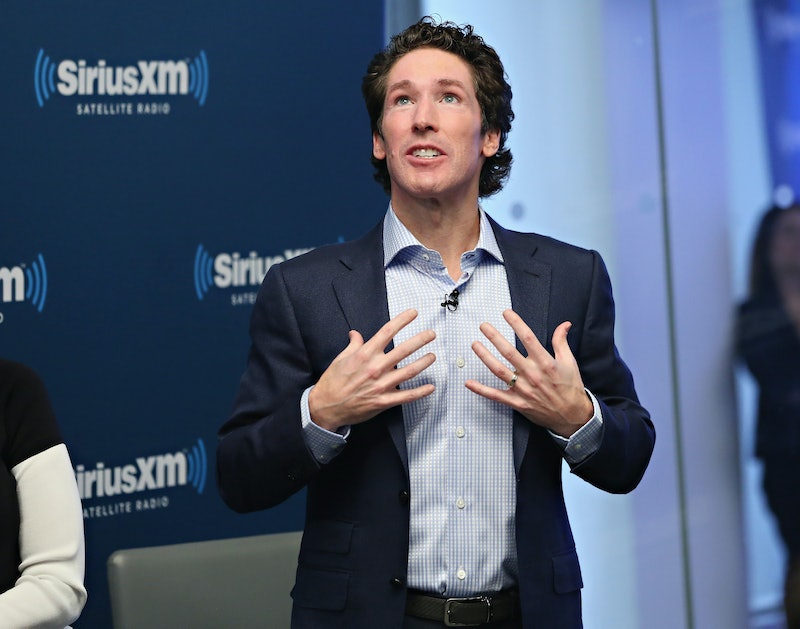 Lakewood Church in Houston, one of America's biggest megachurches, faced significant backlash when it was slow open its doors to Hurricane Harvey victims fleeing their flooded homes. The delayed response has led critics to chastise the church's celebrity pastor, Joel Osteen, and renewed focus on what he believes.

Today, more than 20 million viewers in more than 100 countries watch Osteen's televised sermons each month. Theologists have described Osteen's preaching as the "prosperity gospel" — the belief that success versus failure, wealth versus poverty, are a matter of individual responsibility. This so-called "prosperity gospel" is the belief in positive affirmations: by removing negative thoughts, God will reward you with success.

In this version of Christianity, God helps those who think positively, and your thoughts will manifest into material success (or lack thereof). Osteen said he does not specifically preach about money, but rather the prosperity of health, good relationships and being blessed. His self-help books include lines such as this one from Your Best Life Now:

I’m a child of the Most High God. My Father created the whole universe. He has crowned me with favor, therefore, I can expect preferential treatment.

As they don't line up with the power of positivity, Osteen eschews negative topics such as hell, judgment, and sin in his sermons. In the wake of the Hurricane Harvey tragedy, people are questioning whether his belief in destiny and the "prosperity gospel" influenced Osteen's delayed response to helping flood victims in Houston, where his Lakewood Church is located.

As Hurricane Harvey ravaged his hometown and destroyed houses on Saturday, the televangelist and his co-pastor wife Victoria tweeted they were "praying for everyone affected by Hurricane Harvey." But as furniture stores, public schools, and mosques around Houston took in flood victims, Osteen made no move to shelter any in Lakewood Church, which draws revenues of more than $70 million a year. The massive Lakewood Church Central Campus seats 16,800 people and is the former NBA arena for the Houston Rockets.

On Sunday, Lakewood staff said on social media that the church was "inaccessible due to severe flooding." Social media users near Houston, however, posted photos of the church from the outside that indicated otherwise.

Under public pressure, Lakewood Church began operating as a large-scale shelter and supplies distribution hub on Tuesday. Osteen called the accusations of his megachurch closing its doors to Harvey victims "a false narrative." He added in an interview with The Washington Post: "This is crazy. People are saying we’ve locked the church. The church has been open from the beginning, but it’s not designated as a shelter."