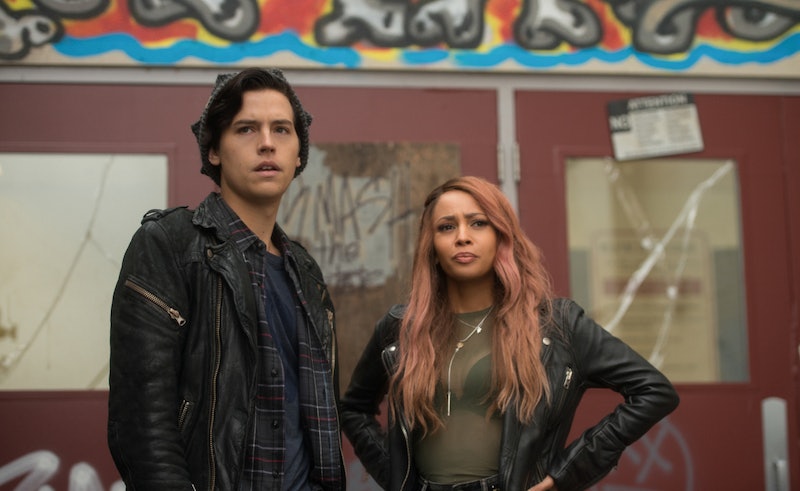 Jughead is weird. He's a weirdo. He doesn't fit in and he doesn't wanted to fit in. But if he did want to fit in, having a name like Jughead would not help. While all of Jughead's friends are accepting of his unique name, there's no denying that it's odd. What even is a "Jughead?" Is it a generic term or does it come specifically from something in Jughead's past? Well, it turns out when it comes to what Jughead means on Riverdale (written by: Britta Lundin, four episodes), the definition changes depending on where you look.

As long as Archie Comics has been around, Jughead Jones has always been called Jughead. The term was eventually revealed to be a nickname for a far fancier name, "Forsythe Pendleton Jones III," which, when it comes to having a regular name, isn't much better than Jughead. But, at least Forsythe isn't an insult.

The term "jug head" exists in culture outside of Archie and Riverdale, with Collins Dictionary defining the term as "a foolish or stupid person." While Jughead hasn't always made the best choices in Riverdale, but he hardly deserves to have a pejorative term be his nickname. While Jughead being called Jughead as a playful insult seems like the most obvious reasoning behind the name — especially since he was often a foolish or goofy character in the Archie comics — the reality behind his nickname has more to do with Jughead's iconic headwear.

Jughead's crown-cap may avoid easy definition, but The A.V. Club suggests that his cut-up hat was actually a popular trend during the time that Archie was created. As writer Rien Fertel explains:

"[The cap was a] short-lived trend of the day: An inverted felt fedora with its brim cut into a ring of jagged peaks. Called a 'button beanie' or 'whoopee cap,' its wearers were often called 'jagheads.'"

Jaghead seemed to become Jughead when the character was being created, and thus an instantly recognizable figure was born. Even as those hats fell out of favor in real-life, Jughead's headwear has never changed. However, as the Archie comics grew, so, too, did the story behind Jughead's name.

In 2015, when the Archie comics were rebooted by writer Mark Waid and artist Fiona Staples, a new origin story was created for Jughead's name that was rooted more in the character's history than just his hat. In the Waid/Staples world of Archie, Jughead lives up to the upper-crust nature of his true name Forsythe Pendleton Jones III. In these comics, the Jones family used to be incredibly wealthy (a far cry from the Joneses on Riverdale) until they made a bad investment in a product called PureJug. As such, he started being bullied by other students who would call him Jughead, and eventually the name stuck. In those comics, it seems that Jughead wears this insult as a badge to keep him humbled.

While the comics have multiple origins for Jughead's name, Riverdale has yet to explore why Forsythe Pendleton Jones III became Jughead. Jughead's life on the South Side probably means that the "bad investment" origin isn't applicable, and no one is getting called a "jaghead" for their hat choice in 2017. Perhaps the show will feature a harrowing flashback to Jughead's youth when someone tells him "Gosh, Forsythe! You can be such a jug head sometimes!" Or, perhaps the show will never address the oddity of Jughead's chosen name, letting the mystery be.

Whatever the truth behind Jughead's name, there are a lot more worrisome things going on in Riverdale at any given time. Whether there's a serial killer on the loose, a mystery that needs to be solved, or a drug dealer that needs to be taken down, there's really not much time for anyone to ask, "Hey Jughead, what's the deal with your name?" But if/when someone does ask, expect Riverdale to have quite the story behind Forsythe's nickname.