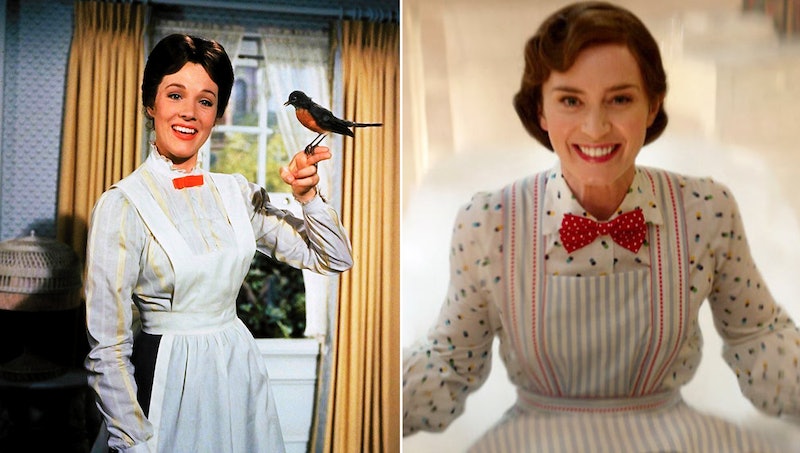 Just in time for the Christmas season, Mary Poppins made her return with umbrella in hand, and landed onto screens at the end of November. While Julie Andrews was the ultimate OG Mary Poppins, Emily Blunt stepped up and made a pretty good 2.0 Poppins. So far, the film seems to have divided audiences, but that's to be expected when you try to revamp a classic. Apparently, Andrews herself has seen the new film, but did she find it Supercalifragilisticexpialidocious, or did she leave the cinema to Feed The Birds instead? What does Julie Andrews make of Mary Poppins Returns?

Well, from the off she's actually been super supportive. In an interview with Entertainment Weekly back in March 17, 2017, Andrews called Emily Blunt the "perfect pick" to revive the role. Blunt's also previously stated that Andrews "was incredibly supportive of me playing the part and excited for me to do it," when she gave an interview to Variety early on in December.

In addition, the film's director, Rob Marshall — who's also the brains behind other onscreen musicals like Chicago and Into The Woods — reassured Entertainment Weekly readers on June 9, 2017 that Andrews was "1,000 percent behind the film." As Marshall, told EW, when suggesting Blunt to Andrews, "she just threw her hands up in the air and said, ‘Yes!'”

While her original costar, Dick Van Dyke appears in the new film, the OG refused a cameo, since she didn't want to cramp Blunt's style. Marshall told Variety at the film's premiere:

"She immediately said no. She said, ‘This is Emily’s show and I want her to run with this. She should run with this. This is hers. I don’t want to be on top of that.'"

Talk about girl power. Blunt even sang Andrews' praises too, noting that she gave Blunt the space to make the role her own:

"There was discussion about, you know, that maybe she would come and do a bit in the movie and she was so generous actually. She said to Rob, ‘Do you know what this is? This is Emily’s version of her and I don’t want it to be that she’s playing Mary Poppins the whole way through but then I come in and there’s like oh, but there’s the real Mary Poppins, you know?'"

Blunt has been keen to pay tribute to Andrews' legacy, without replicating it. "No one can impersonate Julie Andrews," she told the Irish Times on Dec. 18, "If I was going to take Mary Poppins on I had to do it my own way or not bother doing it at all." And that she does. Some Brits may have been skeptical when it was announced that Blunt, a British-American actress, would be playing the ultra English Poppins. However, Blunt's accent is deliciously, and knowingly hammy.

"I came up with the accent myself," she said in the same interview, taking inspiration from the quick cadence of Rosalind Russell in the 1940s flick His Girl Friday, as well as from the unlikely source of Princess Margaret. Blunt may not be the OG, but she is the next best thing. If you can get Andrews' approval, you can get the world's.

A previous version of this article mischaracterised Emily Blunt's nationality. She is British-American.