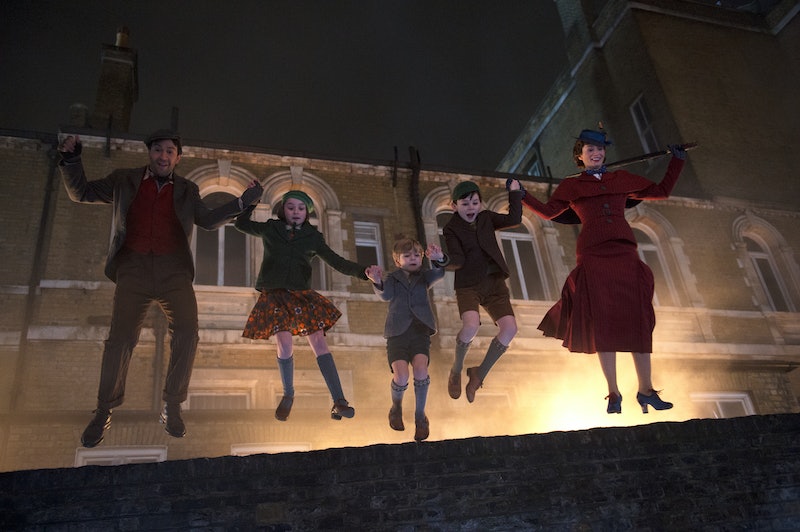 One of the most anticipated films of the holiday season is Mary Poppins Returns, a sequel to the original 1964 musical film starring Julie Andrews and Dick Van Dyke. In this outing, out Dec. 19, Emily Blunt brilliantly takes on the role of Mary, while Hamilton star and scribe Lin-Manuel Miranda takes the place of chimney sweep Bert as a lamplighter named Jack. Mary returns 20 or so years after the original film took place to revisit her former wards Jane and Michael Banks, here played by Emily Mortimer and Ben Whishaw. The depression is in full swing, and the Banks children, one of whom has children of his own, are in need of a pick me up. And fortunately, the new adventure involves some Easter eggs that reference the original Mary Poppins.

Naturally, since this film is a sequel, its going to revisit some of the most famous scenes, characters, and set pieces from the original movie. Mary Poppins Returns touches on themes of how adults forget their precious childhood memories, and how those memories can reignite imagination. This movie is certainly a needed spark of positivity in a tough time, and remembering the joy and happiness of the first film is what Mary Poppins Returns sets out to do, all while also telling a new story with new songs and scenes. To jog our memories, though, here are all the callbacks the new movie makes to the original. Spoilers ahead!

In the opening moments of Mary Poppins Returns, Miranda's lamplighter Jack rides his bike past St. Paul's Cathedral. In the first film, this is where Jane and Michael see the bird lady who sells bags of bird feed for "tuppence a bag." As Jack rides past, a group of pigeons fly into the air in a lovely homage.

The opening credits of Mary Poppins Returns look like lovely, colorful chalk drawings, just like the ones that Bert draws in the park. The first movie sees Mary take Bert and the children inside those chalk drawings, but in Returns, the gang visit an animated world on the side of a delicate porcelain bowl.

Yup, Admiral Boom is still at it. The Banks' next-door-neighbor who fires a cannon from atop his naval-themed home on the hour, every hour, is still alive and shooting of his mouth, er, cannon. (Formerly played by Reginald Owen, he's portrayed by David Warner in the new movie.)

In the books, written by P.L. Travers, the Banks' neighbor, Miss Lark, had two dogs, Andrew and Willoughby. Fans of the original will remember Andrew, the shaggy scamp. In this sequel, Willoughby makes an appearance, though it's not clear whether his owner is supposed to be the original Miss Lark, or her daughter, or someone completely new.

The Banks house features a snow globe with a replica of St. Paul's Cathedral on the inside. When Jane and Michael are cleaning out the attic in the new movie, Jane picks up a snow globe which has been packed away and forgotten, a reflection of Mary's assertion that, "grownups always forget."

6. The "Votes For Women" Banner

Jane and Michael's original green kite from the first movie was held together with leftover newspaper print and a very special tail: the "Votes for Women" banner that their mother, Winifred Banks wore to her suffragette rallies. When Michael finds his old kite up in the attic and takes it out to the trash, it still has the feminist banner hanging from it. The kite remains a feature for the rest of the movie, but the tale disappears, a glimmer of remembrance that Jane and Abigale can now vote because of Winnie's fight.

It comes as no surprise that Mary Poppins still has her signature carpet bag. Though no full-sized floor lamps come out of it in the new movie, plenty of other fun stuff does, like magical bubble bath that makes the tub into an entire world under the sea. Mary's umbrella handle also returns as the talking parrot that Mary refuses to admit is actually talking.

Though the two animated universes in Mary Poppins and Mary Poppins Returns are very different, some of the same animated characters make an appearance. Most notably, the penguins, who totally had a thing for Mary Poppins in the first movie, and seem to love her just as much in the second.

9. Topsy & Her Upside Down House

Meryl Streep plays Mary Poppins' distant cousin Topsy. When the gang visits her house they find that the entire place has been turned upside down. They do a bit of dancing on the ceiling, and turn themselves upside down in a fun musical number. The whole scene is reminiscent of when the original film visits Mary's only other known relative, Uncle Albert. Albert suffered from a strange condition where he would float to the ceiling every time he laughed. What a strange family indeed.

The chimney sweeps of the first movie are replaced here by leeries, the lamplighters who travel the city lighting and putting out the old gas lamps of the era. Though the chimney sweeps are gone, we do get a song and dance from the leeries that feels like a love letter to "Step in Time" from the original movie.

If you listen carefully, you'll hear moments in the score that call back to the songs from the original movie.

Fans of the original will remember that the head honcho of Fidelity Fiduciary Bank, Mr Dawes Sr., was played by Dick Van Dyke in old age makeup. Now that Dick Van Dyke himself is 92 years old, he can play an elderly bank manager without hours in the chair! But this time, he's Mr Dawes Jr., the son from the original movie.

And in making this cameo appearance, the movie uses an old gag from the first. The closing credits of the first movie list Mr. Dawes Sr. as being played by someone named "Nackvid Keyd," before the letters jumble to reveal Dick Van Dyke. The sequel uses the same gag, making his name an anagram again in one final homage to the first movie.

So don't be like the Banks children, or adults in general, and forget! These loving callbacks to your favorite nanny deserve to be appreciated.

More like this
Everything To Know About 'My Big Fat Greek Wedding 3'
By Grace Wehniainen
Emma Thompson, Lashana Lynch, & Stephen Graham Lead Netflix’s 'Matilda'
By Sophie McEvoy
15 Intriguing Movies On Netflix That Are Based On True Events
By Mary Kate McGrath, Shannon Barbour and Grace Wehniainen
The 'Jurassic Park' Cast, Then & Now
By Arya Roshanian
Get Even More From Bustle — Sign Up For The Newsletter