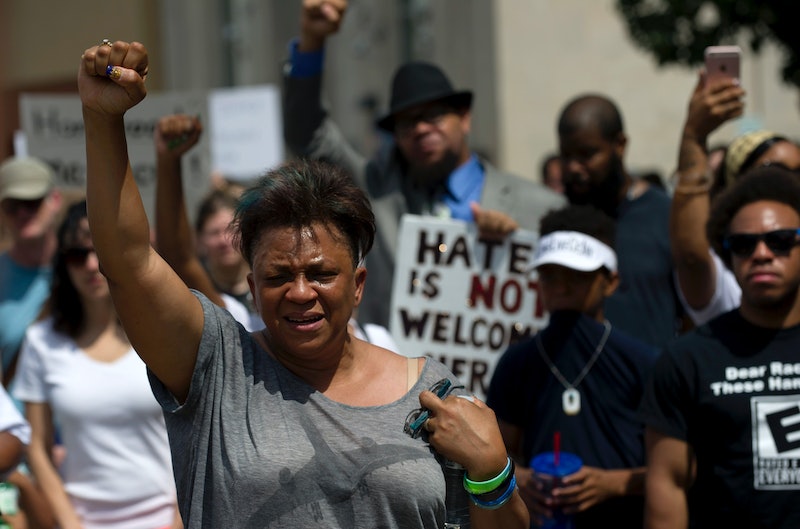 Activists, advocacy groups, and everyday men and women will be gathering at the end of September to make a simple demand. The March for Racial Justice, a rally abbreviated as M4RJ, is set to take on September 30 in Washington, D.C. But what exactly does M4RJ want? The march will demand racial justice for people of color in the United States of America. On Saturday morning, participants will be congregating at Lincoln Park on Capitol Hill, where they are expected to be joined by the March for Black Women. But those who can't make it to the capital need not worry as the website offers an option for sister marches in other places.

M4RJ noted that its march was not a unique one but its demand remained ever relevant and radical. "For generations," its mission statement read, "we have marched, sat-in, walked-out, blocked bridges, protested, and educated our communities about issues of racial justice in a struggle to transform the policies that produce these injustices."

The march's designated day is of particular importance as the organizers note that September 30 is the anniversary of the brutal Elaine massacre in Elaine, Arkansas. The history behind the Elaine bloodshed is an incredibly disturbing one involving the bravery of over 100 black sharecroppers who sought to form the Progressive Farmers and Household Union of America in order to gain better and livable wages from white plantation lords.

The demands of black sharecroppers were not only unheard, they were violently attacked by white plantation owners who hunted and slaughtered them in open fields. More than 245 people were lynched in Arkansas' Phillips County. Justice still remained out of sight as the 77 citizens who were tried and punished for rioting were all black. Thus, Sept. 30 remains an utterly shameful and dark part of America's racial history. M4RJ will convene on that day to "mourn their lives and honor their resistance. Their courage reverberates through the generations and inspires our struggle today."

The organizers explained the mission of their march as a coalition of groups united to "stand together for racial justice, and call out white supremacy and its interlocking oppressions along gender, class, sexuality, ability, religion and immigration status."

The rally has been endorsed by considerably big groups and campaigns with a wide range of causes. Groups like the Jewish Voice For Peace, D.C. Abortion Fund, American Humanist Association, Greater New York Labor Religion Coalition, Codepink: Women For Peace, International Socialist Organization, National Organization For Women, Youth Caucus of America, Campus Anti-fascist Network, YWCA, Women's March West Virginia, and the National Political Committee of Democratic Socialists of America are only some of the groups that have given M4RJ a solid thumbs up.

The march may even address Donald Trump's most recent debacle in Huntsville, Alabama, where he indirectly referred to former San Francisco 49ers quarterback Colin Kaepernick as a "son of a b*itch" for not standing up for the national anthem. "Wouldn’t you love to see one of these NFL owners," Trump said, "when somebody disrespects our flag, to say, ‘get that son of a b*tch off the field right now. He is fired. He’s fired!'" Ever since, Trump has been strongly denounced by thousands and thousands of Americans along with sports figures from the NFL, NBA, and MLB.

In the current political environment of the United States, M4RJ's march will be tackling some thorny subjects head on. From the fatal Neo-Nazi rally in Charlottesville, Virginia, Trump's cancelling of the DACA program, to the president's disgusting remarks on Kaepernick, the current administration seems to have failed to win the approval of racial minorities who fear for their well-being. Given these reasons, M4RJ will be a march to tune into.