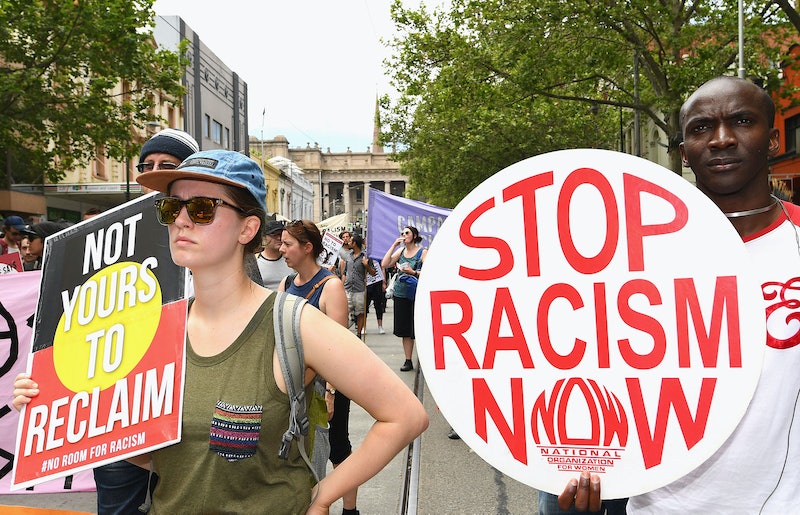 After Donald Trump was elected president, many women, LGBTQ people, and racial minorities experienced an increase in fear for their rights and even their lives — and for some reason, some people still don't quite understand why. So, to make it crystal clear, Adam Powers created the Tumblr "Why We're Afraid." The site's tagline reads, "Don't tell us we're overreacting" — and the incidents of hate and discrimination it collects prove this statement absolutely correct.

Powers, a trans woman, tells Bustle over email that she personally felt worried after Trump was elected. "I'm queer, transgender, and still early on in my transition," she explains. "All the business with bathrooms? That's stuff I think about daily. The idea that the people who think my identity is illegitimate, or almost worse... is what allowed Trump to win keeps me up at night."

And she's not the only one who has felt the impact of having a leader who has condoned sexual assault, insulted people based on their race, and appointed a vice president who seems to be against LGBTQ rights. "Within 24 hours of the election being called, I started seeing incidents of politically-motivated harassment popping up all over social media, not only from media figures like Shaun King, but from my friends and friends-of-friends," she says. "This is pretty much exactly what I expected, sad to say, and I knew that it was probably reflective of a much broader trend than was being captured." Via Facebook, she asked friends to send incidents they'd heard about, and soon, there were enough to fill a Tumblr. So, she created one that people could submit their own experiences and other stories to.

While it's hard to say whether all these incidents would've happened if the outcome of the election were different, statistics do show that hate crimes have gone up since Election Day 2016. The Southern Poverty Law Center documented 430 hate crimes in the five days following it. "Why We're Afraid" shows the reality of these crimes and other acts of hate and discrimination. One person submitted an anonymous letter they'd received in the mailbox using the N word, saying that they "aren't welcome here." One link on the site points to a story about a woman in a hijab being allegedly verbally attacked in a store. (The manager of the store confirmed the attack to KRQE News 13; police were called and arrived at the store after the attacker had left.) Another shows graffiti reading "the white man is back in power."

"I'm glad that organizations like the Southern Poverty Law Center started aggregating incidents of harassment a couple days later, though I'm equally glad that our site allows people to see submissions so it remains on people's minds," says Powers. "People aren't upset because their candidate didn't win. They're upset because their lives and the lives of their loved ones are in danger. ... These are not typical times: literal, actual Nazis are coming to power because of the doors that Trump has opened."

While Trump and his supporters may be more concerned about other issues, like the economy, and not condone discrimination themselves, Powers believes there is no excuse to support his administration in light of the resurgence of hate his election has sparked. "To even pretend to be an ally to people of color, to the queer, to the non-Christian religious right now means opposing this administration with everything you have and without compromise," she says. "When the KKK supports your candidate, sorry, but no matter what you think you did, you voted with the KKK."