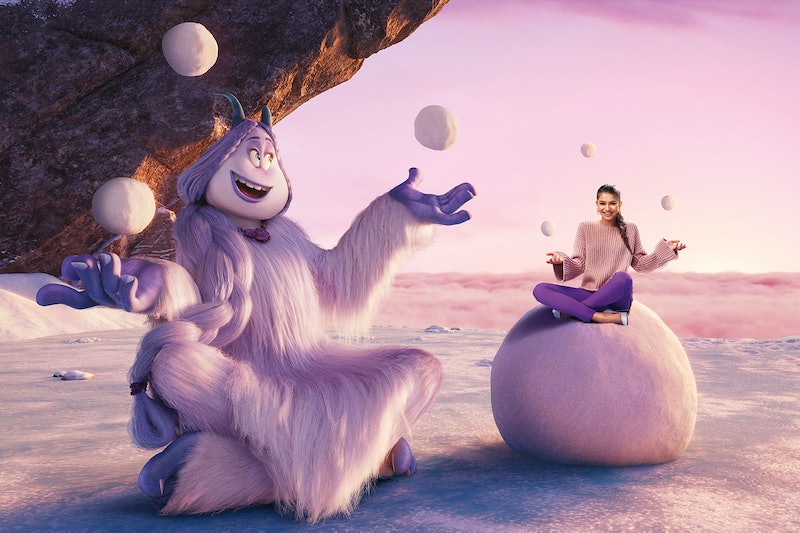 OK, so Zendaya is Meechee. That much is made patently clear in Gabriel Gundacker's bizarrely catchy, 52-second musical homage to Smallfoot's cast of characters and the stars that play them. But for any of the 4.3 million viewers who've watched the video and still don't know what Meechee actually means — beyond the fact that Zendaya is Meechee in Smallfoot, obviously — you're probably not alone.

Seriously, anyone else feeling a little bewildered by this whole "Zendaya is Meechee" thing? First, who is Meechee? And second, what does Zendaya have to do with them? As it turns out, the answer to that particular string of questions is a pretty straightforward one. So straightforward, in fact, that Gundacker (a YouTube comedian who, like many, got his start on Vine back in the day) quite literally pulled the phrase "Zendaya is Meechee" from one of several promotional posters for Warner Bros. upcoming animated film, Smallfoot.

Those who've watched Gundacker's silly video (and likely spent a considerable amount of time thereafter re-watching it, or at least replaying the nonsensical tune in their heads) know which promotional posters we're talking about here. At the video's start, Gundacker walks past several character posters, plastered side-by-side along an exterior wall on some city street. Accompanying magnified cartoon renderings of their respective Smallfoot characters, the promo posters offer a quick overview of the film's cast, their individual characters, and what those characters are going to look like onscreen.

Per Gundacker's video, those posters read: Zendaya is Meechee, LeBron James is Gwangi, Danny DeVito is Dorgle, Common is Stonekeeper and Gina Rodriguez is Kolka. And while it seems like those buzzy little phrases were just intended to tease Smallfoot's star-studded cast and their corresponding characters, Gundacker managed to turn those very phrases (mostly just "Zendaya is Meechee") into an actual, melodically pleasant — and now, viral — song.

So, just so everyone's on the same page: Meechee is the name of Zendaya's Smallfoot character. And, while we're on the subject of Meechee, it's probably worth noting that Zendaya's character is also a yeti — aka the mythological creature from Himalayan folklore. As to the meaning of "Meechee," that remains unclear. The name, just like those of all the other yeti characters in Smallfoot, is pretty unique, and searches don't turn up much as to what this particular word could mean. And this song, while catchy, doesn't exactly explain what the word means either.

Gundacker's "Zendaya is Meechee" might not hold much deeper significance than the one it makes clear upfront (i.e. Zendaya is Meechee), but the video has been met with furious bouts of support from online followers and Smallfoot cast members alike. "Sang my name right and everything," wrote Zendaya on Twitter over the weekend, responding to Gundacker's video with a quip of her own.

In fact, whole roster of celebrities have voiced similar amusement and appreciation for the "Zendaya is Meechee" video on social media, including but definitely not limited to Seth Rogen, who replied to Gundacker's original tweet with "Thank you for this."

Plain and simple. Judging by the generally massive —and exceedingly enamored — response to the "Zendaya is Meechee" video, it seems pretty safe to say most folks on the internet would probably have to say the same thing.