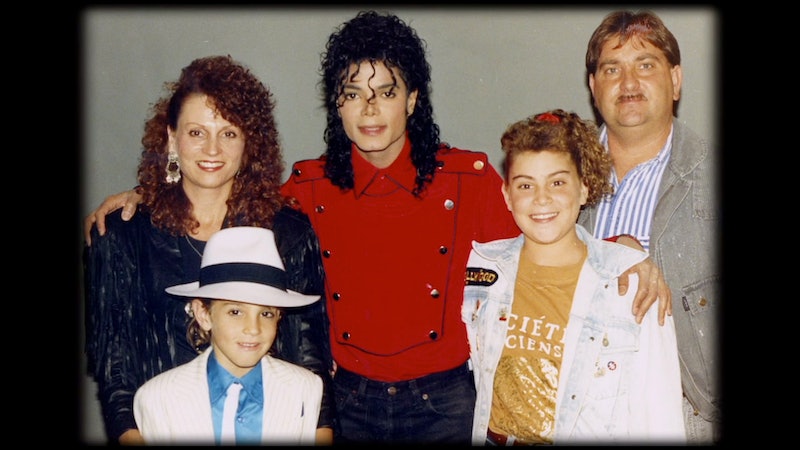 A new documentary about Michael Jackson airs in two parts on HBO on Mar. 3 and 4. But it's been a rocky road to the Leaving Neverland premiere. Directed by Dan Reed, the four-hour film investigates accusations of child abuse and molestation leveled against the deceased entertainer, through interviews with now-adult accusers Wade Robson and James Safechuck and their families. But what does the Jackson family think of Leaving Neverland? Some relatives have been vocal about their response, while others have kept silent.

Appearing on CBS This Morning on Feb. 26, Reed said the Jackson family weren't in the room when any of the alleged abuse detailed in the documentary took place, so he saw no reason to reach out to them for this film. "This is not a film about Michael Jackson, it’s a film about Wade Robson and James Safechuck, the two little boys to whom this dreadful thing happened long ago,” he told host Gayle King.

The documentary indeed focuses on Robson and Safechuck, now adults, who claim that Jackson sexually abused them when they were children, composed mostly of interviews with them and their families. In the documentary, both men go into graphic and pointed detail of the alleged abuse, and reflect on why they both denied being abused by Jackson in the past. Jackson was never charged of any crimes in relation to Safechuck or Robson; he died in 2009.

IndieWire reported that immediately after the film's Sundance Film Festival premiere was announced, the Michael Jackson estate officially denounced Leaving Neverland in a statement that reads:

In the weeks following the film's premiere, lawyers representing the Michael Jackson estate sent a 10-page letter to HBO Chief Executive Officer Richard Plepler, claiming the documentary, and by extension HBO, were "relying on the uncorroborated stories of two admitted perjurers over the weight of the American justice system" that they note found Jackson not guilty of all charges in his 2004-2005 molestation trial.

According to The Hollywood Reporter, on Feb. 21, Michael Jackson's estate sued HBO and Time Warner to block them from airing the documentary, alleging that doing so would constitute "a breach of a non-disparagement clause in an old contract" — a contract that was drawn up in 1992 for a televised concert of Jackson's Dangerous tour. THR included the statement HBO issued in response:

"Despite the desperate lengths taken to undermine the film, our plans remain unchanged. HBO will move forward with the airing of Leaving Neverland, the two-part documentary, on March 3 and 4. This will allow everyone the opportunity to assess the film and the claims in it for themselves."

Jackson's 45 year-old nephew Taj Jackson took to Twitter to denounce Leaving Neverland as a cash and attention grab on Robson's part, writing in a Jan. 26 post, "Don’t tell me a 4 hour one sided hit job that you watched is more reputable than people who actually knew [Robson] and saw his interactions. This is all about money and the desperate need to be relevant again."

His brother Jermaine went on Good Morning Britain on Jan. 30 to defend Michael. "Michael was tried by a jury, and he was acquitted on all of this [charges of child molestation] because there was no real evidence, there was nothing there," he said. "We're very tired. Let this man rest. He did a lot for the world. Let him rest. There is no truth to this documentary."

The Daily Star reports that, when asked about the documentary at a press conference for tribute show Forever, The Best Show About The King of Pop, Michael's sister La Toya refused to answer. "We are here to talk about the show, honoring it and for everyone to enjoy [Michael's] life and work," she said. "From my humble point of view, and maybe I seem a bit egocentric, but I do not think there is anyone who can compare with Michael."

On Feb. 26, brothers Tito, Marlon, and Jackie Jackson were joined by nephew Taj on CBS This Morning to respond to Leaving Neverland. Marlon said, "It's all about money" for Robson and Safechuck, then added, "This documentary is not telling the truth. There has not been not one piece of evidence that corroborates their story." When pushed by host Gayle King, who pointed out none of them had actually seen the documentary, Jackie responded, "I don't have to see that documentary. I know Michael. I'm the oldest brother. I know my brother. I know what he stood for. What he was all about. Bringing the world together. Making kids happy. That's the kind of person he was."

None of Jackson's children — Michael Jr. (who goes by Prince), Paris, or Prince (who now goes by Bigi) — have commented publicly on the documentary. Neither has his sister Janet.

In spite of the family and estate's complaints, HBO has no plans to alter or postpone the documentary's airdate. Programming president Casey Bloys told Variety, “We announced the air date. It will air as planned,” adding that he hopes potential viewers will reserve judgement until they watch. "We’ve been doing documentaries for a long time. I think this one is a very important one, and it’s a very powerful message. I think both men were very brave to share their stories, and they deserve to be heard.”