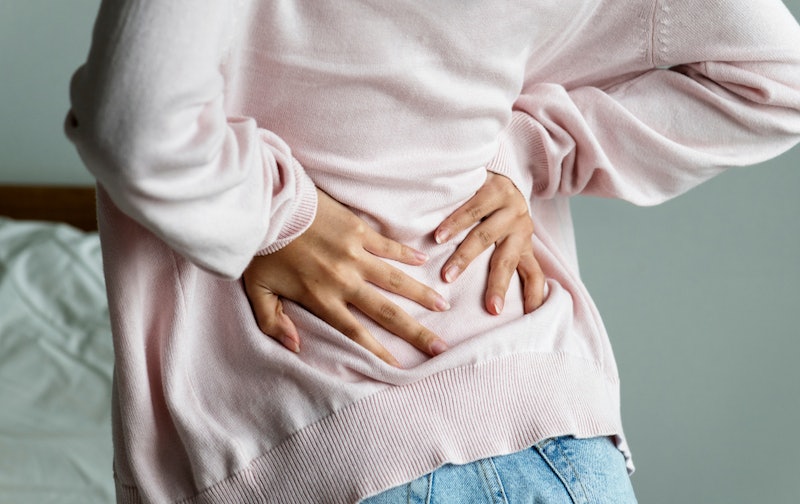 Most people who have periods will experience some form of period pain. Whether you're doubling up each and every month or only experience the odd cramp every now and then, knowing what that pain means and how to combat it can literally change your life. While the typical definition of period pain is stomach cramps, many people also experience discomfort in other parts of their body. So what does having period pain in your back mean?

According to Bupa, around nine out of ten people who menstruate get period pain. This pain can be intense or dull, constant or occasional, and typically lasts between 48 and 72 hours. The process that leads to such pain is a little complicated. During the menstrual cycle, the muscular wall of the womb begins to contract more powerfully to encourage the lining of the womb to shed, states the NHS.

These contractions result in the blood and oxygen supply to the womb being cut off. When tissues don't have access to oxygen, they release pain-causing chemicals. And in a cruel twist, prostaglandins — hormones that promote more contractions — are simultaneously released, causing even more pain.

"The likely cause is a muscular issue," Shamir Patel, pharmacist at Chemist 4 U, tells me. "It's caused by the hormone changes that are happening in your body, largely your prostaglandins, having a direct effect on your lower back muscles." This type of pain is usually felt in the centre portion of the lower back, according to The Virginia Spine Institute, and often begins a few days before the menstrual cycle.

Some experts believe the discomfort could also be down to something called "referred pain". Dr Ross writes: "Due to nerve fibres in the pelvis, you can perceive pain in another part of your body." Essentially, this means the pain isn't actually in your back, but your mind is leading you to believe it is. Brilliant.

In most cases, back pain during your period is nothing to worry about. "Painkillers can be taken to ease the issue if it's becoming too much to handle," says Patel. He also recommends directly applying a form of heat relief such as a hot water bottle "to relieve some of the tension that is built up as a result of these hormonal changes." Taking a warm bath is another option.

So is exercise. "Most [people] tend to stay away from exercising during their menstruation," Patel explains, "but actually light exercise such as walking, yoga, and pilates can release endorphins and decrease PMS symptoms — in particular, back pain."

Another remedy may be taking a form of contraceptive that can thin womb lining and reduce the amount of prostaglandins that are released. The combined oral contraceptive pill and contraceptive implants and injections are potential options to consider.

There is the chance that period pain located in the back could be caused by an underlying condition like endometriosis. According to the NHS, other symptoms of these conditions tend to be irregular periods, bleeding in between periods, and pain during sex.

If you are suffering from any of the aforementioned symptoms and/or if your back pain persists past your menstrual cycle, it's best to book an appointment with a doctor. Your GP can then offer advice or search for the root cause of the problem.

More like this
The Case For Following A Menstrual Cycle Workout Plan
By Emma McGowan and Carolyn Steber
Here’s What TikTok's "Mascara” Trend Is *Really* About
By El Hunt
How Ovulation Affects Your Sense Of Smell, Libido, & More
By JR Thorpe and Lexi Inks
Ben & Jerry’s New Sundae Flavours Are A Chocoholic’s Dream
By Sophie McEvoy
Get The Very Best Of Bustle/UK
Sign up for Bustle UK's twice-weekly newsletter, featuring the latest must-watch TV, moving personal stories, and expert advice on the hottest viral buys.