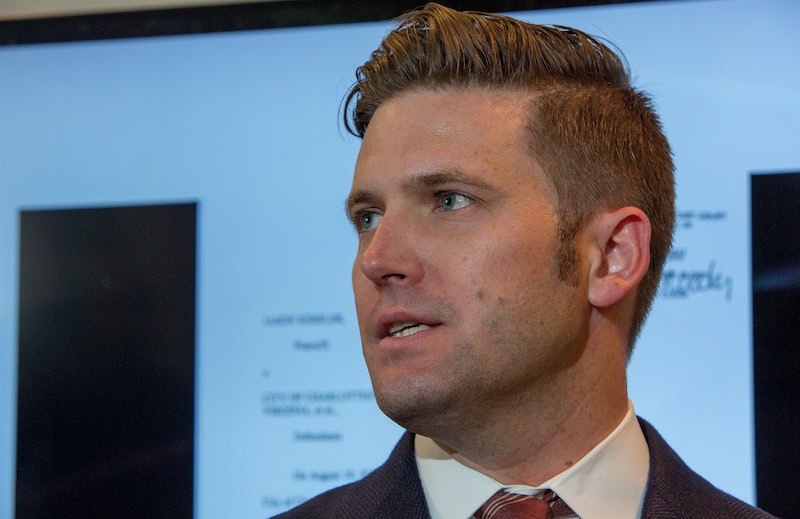 On Saturday, white supremacists gathered for an alt-right rally in Charlottesville, VA for the third time in three months to chant neo-Nazi slogans and protest the covering of a statue of Confederate leader Robert E. Lee. Prominent white supremacist Richard Spencer was the keynote speaker, and promised, through group chants that he led at the rally, that he and other white nationalists will "keep coming back again and again." So what does Spencer want? In the past, he has called for the creation of a "European homeland," and on Saturday, he maintained that his ultimate goal is preserving white identity and culture.

“Our identity matters," Spencer said in Charlottesville over the weekend. "We are not going to stand by and allow people to tear down these symbols of our history and our people — and we’re going to do this again.”

Spencer has led a number of rallies in recent months to protest the removal of Confederate monuments across the country, which many local governments have decided to remove because of their painful ties to slavery and racial segregation. To Spencer, these monuments glorify an era in which white people were in power over other racial groups and memorialize a key aspect of white history.

But his motives go far beyond statues and monuments. In fact, Spencer has not ruled out the possibility of a "horribly bloody and terrible" revolution to achieve his ultimate goal of reasserting white dominance.

In an interview with NPR's Kelly McEvers last year, just after President Trump won the election, Spencer said that his ultimate political goal is to create a "safe space effectively for Europeans."

Spencer has called for an "ethno-state" repeatedly as a spokesperson for the alt-right, but what exactly he means by this remains unclear. He has struggled to answer exactly how, in a nation with millions of minority citizens, such a space could be created, and, in his interview with McEvers, he stumbled through a response when pushed on his assertion that people of different races "inherently" don't get along.

While Spencer does have some concrete policy proposals that he espouses, mostly relating to immigration (obviously, he believes that only Europeans should be allowed to legally immigrate into the country), what could ultimately make him the most dangerous is the fact that what he really wants is "influence."

Alt-right communities continue to grow online, and in recent months, many white supremacist groups have started taking their messages out into the world, through rallies and protests, with alarming frequency. What is even more alarming is that alt-right communities have not been convincingly condemned by President Trump, even when they have caused violence or, as was the case in the first Charlottesville rally in August, turned deadly. As of Saturday afternoon, Trump has yet to respond to the latest Charlottesville alt-right rally.

Spencer's goal of achieving a white ethno-state is both disgusting and unrealistic. But given that the alt-right movement that he helped define has continued to rise in prominence, and has not been consistently rebuked by the president, he may be able to expand his influence by hosting more unchallenged white supremacist rallies in the coming months.