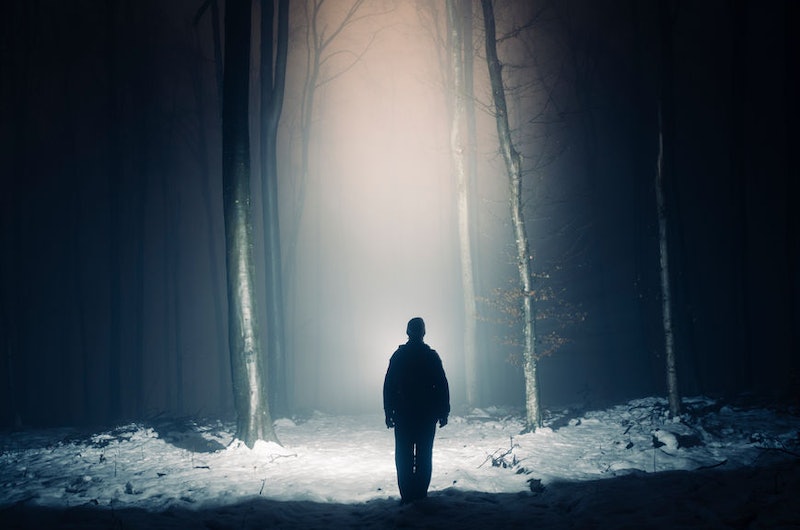 Sleep paralysis has always fascinated me. The idea of being not quite awake but not quite asleep, yet completely paralysed, all while an evil shadow figure creeps towards you, sounds terrifying. I've always wondered what does sleep paralysis feel like and what I would do if I were ever in that situation. I mean seriously, what would you do?

My sister experienced it for the first time a few years ago and she still gets freaked out when we talk about it. "Imagine someone attacking you," she says. "I actually saw someone holding me down. Imagine a man holding you down in your bedroom. That's what it felt like for me. I was in tears, crying my eyes out, when I woke up. I was afraid to go back to sleep because it felt so real." Sounds scary AF, right? Despite my obsession with the whole concept, I was grateful I hadn't actually experienced sleep paralysis myself. But then, last week, while I was staying in my apartment by myself, it happened. TWICE.

It was a Tuesday night and I had to be up for work early the next day. Yet for some reason, I was still up at around 2.30am, reading through emails. When I eventually closed my laptop and turned off the light, the knowledge that I would probably only get four hours kip that evening was frustrating. My own fault, I know, but still... "Sleep paralysis is usually brought on by stress, sleep deprivation, and sometimes even alcohol," chief sleep physiologist Joseph Gannon of the Sleep Disorders Clinic tells me.

Great, wish I'd known that this time last week.

After putting my head on the pillow, I don't remember actually falling asleep (who does?), but I do remember opening my eyes yet simultaneously not being awake. I was laying flat on my back with my head turned to the right, but I couldn't move my neck. Using just my eyes, I looked down at my right hand and could see it partially covered by the duvet. Then, something changed. This is going to be hard to describe and no matter what route I take here, it's going to sound weird.

You know when you pop your ears and the sound becomes muffled? Or when it's so quiet you can actually hear the silence echoing in your ear? Well, that sound (or lack of sound) swept over me like a wave, and as it did, the atmosphere completely changed. Somehow, I knew there was now something lurking in my bedroom doorway, which is at the bottom left of my bed. I sleep on the right side. I couldn't turn my head but I knew something was there. I could feel it. It was like it was waiting, contemplating whether to slowly crawl into my peripheral vision and freak me out.

Suddenly, I then became aware that I was experiencing sleep paralysis. I have no idea how I cottoned on to what was happening but I just knew. But that realisation didn't wake me up. It didn't mean that I could then start moving. I was still very much paralysed, but I did feel slightly more in control. I know that sounds bonkers. But wait, it gets weirder.

Because I now knew I was experiencing sleep paralysis, I then started to get angry. I knew there was some kind of creepy demon entity that I couldn't see and I was not happy. I would probably end up like Becca in The Ring (the girl who gets institutionalised when her BFF Katie is literally scared to death after coming face-to-face with Samara) if I actually saw the shadow figure. Or even worse, I'd end up like Katie herself. Don't remember what happened there? Check out the clip below.

Meh. I definitely haven't got time for that. So I started getting annoyed. I remember trying to telepathically warn the demon in my best Danny Dyer voice, "Just take one step closer and watch what happens." Yeah, I'm not sure what I would have done if the shadow figure had taken that one step closer. I mean, I was paralysed. What was I going to actually do, roll my eyes at it?

Then I got distracted. I could hear this weird noise, like a giant propeller. The best way I can think to describe it is the sound you would hear if you were stood next to a wind turbine. At the time, I remember thinking that the noise was the propeller attached to an alien spaceship hovering outside my bedroom window. I know that sounds stupid but it was quite freaky at the time because I wasn't sure who was on board.

Thankfully, I then woke up and was seriously sketched out. It did not feel like a dream. It felt like I had been partially sedated.

I probably should have got up and gone to the living room to watch some TV, but I was feeling a little cautious. I mean, a few seconds earlier, I suspected a demon was lurking around my bedroom door. I didn't fancy taking a walk in that direction just yet. So I went back to sleep. Big mistake.

When I fell back asleep, which didn't take very long at all, the exact same thing happened again. After that, I kid you not, I checked the time on my phone and it was 3.30 a.m. aka the witching hour. Great. Just what I needed.

When I explain what happened to Gannon of the Sleep Disorders Clinic, he tells me that the fact I was aware I was experiencing sleep paralysis while it was happening potentially helped the situation. He says:

"Usually, it helps you to come out of it quicker and you are less panicked. You may have that initial panic but when you realise what's happening, it's easier to tolerate. Then, it's just a matter of waiting for you to wake up fully, essentially. When you understand what's going on, you will come around quicker because you are more conscious."

Gannon goes on to explain that hallucinations, both visual and auditory, are common in sleep paralysis. "Someone at the end of the bed is commonly reported," he continues. "The textbooks describe it as an impending feeling of doom, along with panic." Lovely stuff.

But why does sleep paralysis have to be so damn scary? I don't think I know anyone that's experienced it and not felt a tad traumatised. "It's because of the sensation of lack of control," he adds. "And it's the fact you can move your eyes but there are these hallucinations. There's nothing comforting about the word 'paralysis'."

I guess not. Luckily, there are ways to prevent sleep paralysis. Good sleep hygiene, not getting too stressed, and not depriving yourself of sleep are good starting points. However, if you are experiencing it regularly, you may need to take extra steps. "I would recommend keeping a diary to see if there are patterns," adds Gannon. "Most people that do suffer with sleep paralysis realise there are triggers for it. If it's becoming problematic, I would say see a sleep specialist because there may also be other triggers like snoring and sleep apnoea. Anything that fragments the sleep."

Well, that certainly sounds like sound advice. After my experience, which doesn't even sound half as bad as my sister's, I would try anything to avoid sleep paralysis. Trust me, you do not want to go there.`