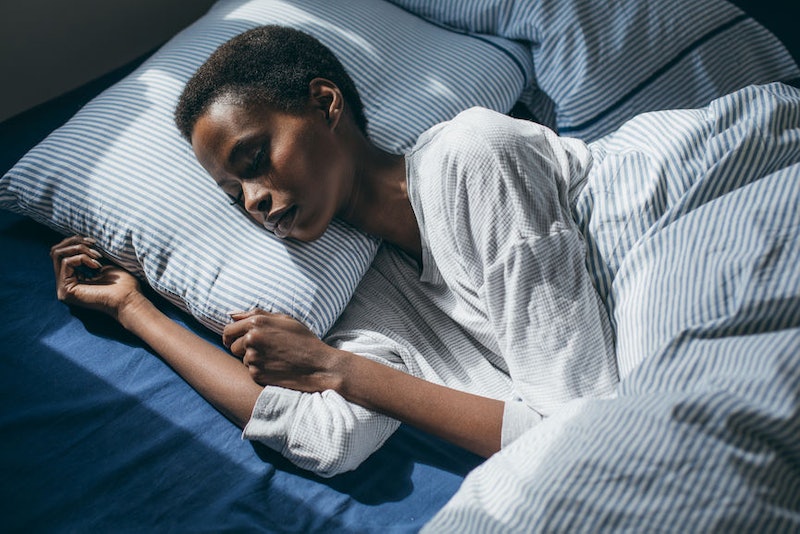 Many people get a thrill from being scared. Not just a thrill, they crave it. Ever watched a horror film, knowing it will petrify you, waiting for the point where you grab a pillow to hide behind? You're not alone. What's not so funny, though, are the nightmares. More specifically with that, sleep paralysis. But what does sleep paralysis mean? And what is the sleep paralysis demon? Yes, you read that correctly, demon.

If you aren't directly familiar with sleep paralysis yourself, you probably will have heard gut-churning stories from friends about their experiences — it's pretty common. According to the NHS, many experience sleep paralysis at least once or twice in their life. The meaning behind people reportedly seeing demonic figures while in the midst of sleep paralysis has a very interesting background to it.

The condition is described as a momentary inability to move your body or speak, while your mind remains perfectly alert and awake. Of course, the reality is a lot scarier than that. Many people say it feels like being trapped within your own body, unable to move as a threatening presence like a demon enters the room. They can hear it, they can see it, and they can feel it coming towards them. Yet, they remain completely unable to react or escape. Talk to someone that's been there and they'll tell you the experience is even more terrifying as it sounds.

People from around the world throughout history have reported seeing the same demons during sleep paralysis. These are people who have never met each other, so it's not like they compared notes beforehand, making it all the more creepy. Paranormal enthusiasts have nicknames these demons — "shadow people". The sleep paralysis demon can also be called "Old Hag Syndrome", because apparently one name wasn't scary enough. In this sense, the sufferer experiences an extremely sensory phenomenon; they not only feel like the old hag or demon is near, but they can hear its call, see it approach, and even sometimes feel the weight of its body on their chest. Terrifying, right? The immobility and sense of being paralysed comes from the demon sitting on the victim's chest.

Dr. Neil Stanley of The Sleep Consultancy told me that the things people experience during sleep paralysis often come from residual images from our dreams and "can lead people to feel that certain strange events occur." Dr. Stanley added that "when you fall asleep or wake up, hallucinations can occur and they often feel indistinct from reality." The significance behind the "demon phenomenon" comes from our inbuilt associations of night time with the supernatural and what Dr. Stanley classes as "our innate fear of the dark caused by our poor nocturnal vision." Essentially, our minds know that "we are afraid of the unknown and the unseen." Yikes.

Needless to say, because of how consumingly creepy sleep paralysis demons are, they have made their way into lots of horror films and scary stories, and been the subject of numerous films. One such documentary, The Nightmare, is not for the faint of heart but does give an intense and thorough understanding of the chilling condition.

The documentary tells the stories of people who have all reported seeing shadow figures. Having experienced the horror of sleep paralysis himself, filmmaker Rodney Ascher sought out others to share their fears, and the mythology behind the demons. The thing viewers will have a hard time ignoring is how each of the personal stories describe how once sleep paralysis sets in, there is nothing you can do but wait it out. Unfortunately, waiting it out means experiencing a phenomenon so fiercely terrifying that it stays with the person for years after.

Experiences like this have bled into horror films, inspiring characters like Freddy Krueger in Nightmare On Elm Street, who represents the commonly seen figure of the "hat man". Perhaps even worse is The Conjuring, which likens sleep paralysis to being possessed because of the total lack of control a person has over their own body, forced to surrender their senses to an overwhelmingly infernal and horrifying being.

Horror movies can be avoided, but chances are sleep paralysis to some degree will affect you, even if you don't experience the full psychological terror of some victims. But is it possible to prevent sleep paralysis? Unfortunately, there isn't a whole lot someone can do, as causes can't be pinned down to specifics. Mental Health Daily recommends that people try and maintain a regular and consistent sleep schedule, reduce any possible interruptions to your sleep that might influence your perceptions (like phones), and to avoid nicotine, caffeine, and other stimulants before bed.

If you have yet to experience the terror that is sleep paralysis and demons, then count yourself lucky. On the other hand, if you have, at least this real life nightmare only lasts a few minutes — though it can feel like an eternity.