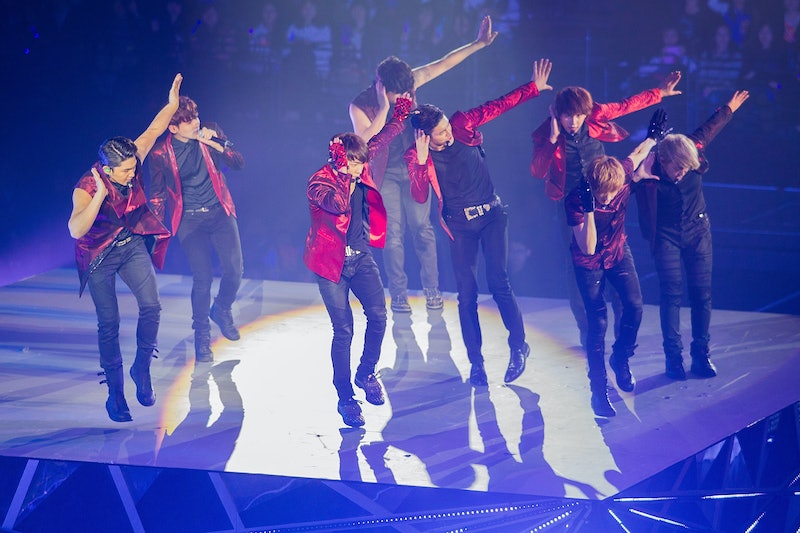 With the 2018 Winter Olympics being held in PyeongChang, South Korea, people watching the games from all over the world are getting a taste of Korean culture. That means kimchi, the Demilitarized Zone, and of course, K-pop. Korean popular music is one of the fastest growing genres in the world, a trend that's accelerating further thanks to the Olympics. And one of the top K-pop acts at the moment is boy band Super Junior, but what does Super Junior mean, and how did the band come up with their unusual name?

Although Super Junior may seem like an odd name for a band, its origin actually makes perfect sense (and at the end of the day, is it really any weirder than Supertramp?). Super Junior was formed in a somewhat unusual way compared to most American bands. Instead of a group of friends playing together in a garage, the band was put together by record label/talent agency S.M. Entertainment, and specifically by owner Lee Soo-Man. The company held casting auditions in Korea and other Asian countries as it looked to assemble a new super group made up of established actors, models, and minor celebrities.

After the group's initial 12 member incarnation was finalized, they were first going to be called O.V.E.R. (Obey the Voice for Each Rhythm) according to Baidu, but eventually settled on the name Super Junior 05. "Juniors" are what the members of the group were called at S.M. since they were young trainees of their system, and they were called "Super" because they were considered the best of the best. Makes sense, but what happened to the "05," and what did it mean?

When the group was first formed, it was never meant to keep its core group of members for more than a year. The plan was to create a graduation system within S.M. wherein every year the group members would be swapped out for new young talented trainees, or new "Super Juniors," according to Koreaboo. And since the original group was formed in 2005, they were called Super Junior 05, with the plan being to start fresh with new members the next year and call the group Super Junior 06, and the year after that with Super Junior 07, etc. This way, the group would always consist of young, fresh faces, which would hypothetically always keep them relevant.

But that's not how things worked out. Fans became so attached to Super Junior 05 that S.M. realized it wouldn't make sense to scrap the band and start over, according to Koreaboo. So the "05" was dropped from the name and Super Junior was able to continue with its original members — even as they got older.

The makeup of Super Junior has still fluctuated over the years, with a peak membership total of 13, but no one has ever been swapped out for younger singers. Today, Super Junior consists of seven active members — Leeteuk, Heechul, Yesung, Shindong, Eunhyuk, Siwon, and Donghae — and every single one of them was part of the original 12 that made up Super Junior 05. Super Junior's profile has raised even higher following the release of their latest album, Play, in December, which is receiving extra promotion thanks to the Olympics. Two members of the group, Donghae and Yesung, served as torchbearers in the lead up to the games, and the group is scheduled to perform following the medal ceremony on Feb. 24, according to Billboard.

With the added international attention on K-pop thanks to the Winter Olympics taking place in Korea, bands like Super Junior should expect to continually receive a lot more questions from Western audiences who are hearing their infectious tunes for the first time.