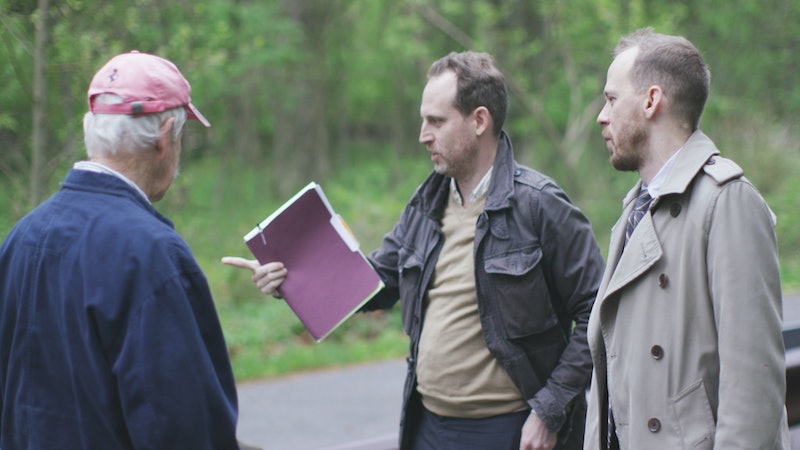 Much like Serial before it, HBO's new docuseries, The Case Against Adnan Syed, re-examines high schooler Hae Min Lee's 1999 murder and the subsequent conviction of her ex-boyfriend, Adnan Syed. He's always maintained his innocence in connection to the crime, and the show takes a close look at the evidence that led him to be convicted, raising questions about the Baltimore Police Department's investigation. However, the officers involved in Syed's case weren't featured in the only episode that's aired so far, so what does the Baltimore Police Department think of the show?

Bustle reached out to the department about the docuseries, but did not hear back by the time of publication. There also don't seem to be any comments from a police representative in any coverage of The Case Against. So we can't know for sure what members of the police department think of the case, and given that the investigation occurred nearly 20 years ago, it's unclear if any of the officers who originally worked on the case are still on the force.

However, we do know what evidence could come into play on The Case Against. According to the New York Times, prosecutors in the initial case used a testimony from Syed's friend Jay Wilds, who claimed that he'd helped Syed to bury Lee's body — an allegation Syed has denied. Also brought up during the trial were cell phone tower records that prosecutors claimed confirmed Wild's account. But, as the Times continues, the reliability of those records have since been called into question, and physical evidence gathered in 1999 was never tested for Syed’s DNA for reasons that are unclear. Furthermore, one of Syed's classmates, Asia McClain, told Syed's lawyer that she saw Syed at the library at the time Lee's murder was committed, but was never called to testify.

Because of these details, Circuit Court Judge Martin Welch granted Syed a new trial in 2016, citing insufficient counsel in the original case, according to the Baltimore Sun. Per NBC News, prosecutors appealed the decision, but the special appeals court upheld the lower court's ruling. The state then appealed that ruling too, and earlier this month, CNN reported that Maryland's highest court ruled to reinstate Syed's conviction, meaning he will not get a second trial after all.

However, the state might not be done with their work just yet. Justin Brown, Syed's defense attorney, posted a statement on his official website in which he vowed to keep fighting for his client:

"We are devastated by the Court of Appeals’ decision but we will not give up on Adnan Syed. Unfortunately we live in a binary criminal justice system in which you either win or you lose. Today we lost by a 4-3 vote. Our criminal justice system is desperately in need of reform. The obstacles to getting a new trial are simply too great. There was a credible alibi witness who was with Adnan at the precise time of the murder and now the Court of Appeals has said that witness would not have affected the outcome of the proceeding. We think just the opposite is true. From the perspective of the defendant, there is no stronger evidence than an alibi witness."

It's unclear what will happen from here, but while Syed and Brown are pressing forward, the state is sticking by the police department's original investigation.