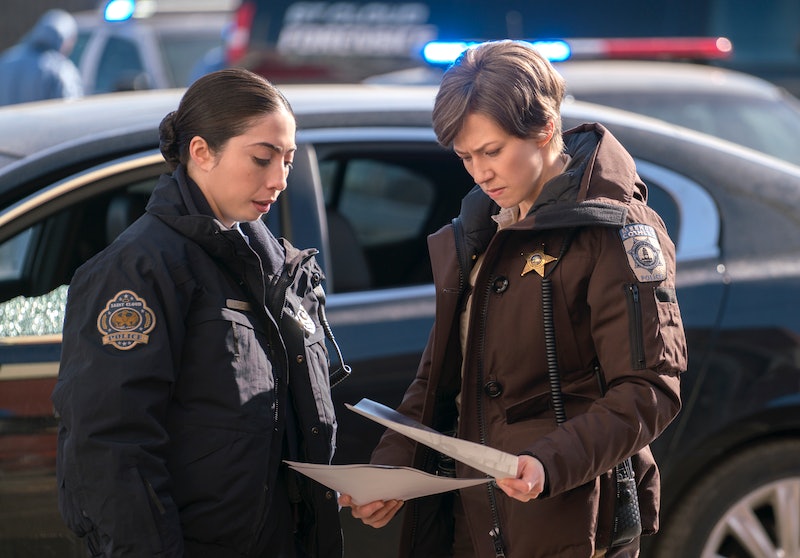 Each season of Fargo proudly wears its philosophies on its sleeve. Season 1 was all about the nature of Good and Evil, Season 2 was about trying to live reasonably in an absurd world, and Season 3 is all about the nature of truth. What is true, what isn't, and how can the truth be twisted in one's favor. The ending of Fargo Season 3 features the season's hero and villain each talking about their version of the truth, but the show ends before it can be revealed who was right: Gloria or Varga?

The entire season has revolved around the idea of truth, as far back as the season's opening prologue. Way back in episode 1, an officer of the law tells a suspected murderer that he's going to be arrested, while the supposed criminal insists he has no idea what the officer is talking about. Decades later, former police chief Gloria Burgle tells large-scale money launderer V.M. Varga that he's going to be arrested, while Varga insists that he won't. The series takes place in 2010, but Varga's manipulation of the truth all series bears a terrifying resemblance to the political climate of 2017. In a world where truth is relative, how do those who wish to rise up against the evildoers make facts and reason work for them?

Gloria's struggle with the truth and reality has always been personal. In the episode "Aporia", Gloria reveals that she often doesn't feel real. Automatic sensors don't recognize her, her theories about the murder case she's working on go ignored, and the leads that she goes to L. A. to follow seem to turn up flat. Even her marriage seemed to be proven unreal, as her husband was in the closet for most of their life together. Gloria seems to feel like she's been living in a world that was not built for her. Sy Feltz, another victim of Varga's tyranny, puts it best when he states that for people like him and Gloria, "The world [feels] wrong. It looks like my world, but everything's different."

Varga, on the other hand, wields the truth like a weapon. He presents lies as truth to get others to bend to his will. At the beginning of the season, his lies almost seem believable, wrapped up in detailed stories that you'd have to Google to disprove. It's not until he's at his most desperate that his lies begin to become obvious. In the finale, while facing down the barrel of a gun wielded by Emmit Stussy, Varga implores Emmit to feel for the fingertip sensor that keeps the gun from working for anyone it doesn't recognize. It's an obvious lie, but sounds just true enough for Emmit to get distracted and be knocked out before he can do any damage.

While Gloria's battle with truth and reality is personal, Varga is upending entire communities and changing the world with his manipulations. He manufactures convenient solutions to problems, such as a Stussy-hating serial killer, so that anyone who believes the truth to be more complex than what's on the surface is deemed a conspiracy theorist. It seems Varga's approach to reality has started to win in the real world as well. Politicians and lawmakers debate facts as though not believing them makes them untrue. A former FBI Director has testified that the president is not trustworthy. The whole world seems to feel wrong. It looks like our world, but everything's different.

Varga's slippery relationship with reality makes it all the easier for him to disappear when he needs to. In the end, with all of his goons dead, Varga escapes. The only evidence of his existence is a grainy photo from an elevator camera. He's designed his whole existence to seem like a lie.

But it's not a lie. Varga is a real person, even if the Varga identity is fake. Real people are actually dead because of him. Real money is in his many bank accounts under fake names. At the end of the series, Varga is really in an interrogation room and he's really face to face with Gloria Burgle. It's not an illusion, but that doesn't stop him from trying one last lie. It's not clear that he has anything to gain from telling this lie other than unsettling Gloria. But after five years, Gloria has finally gained the confidence in herself to dictate her own reality.

In the end, Varga and Gloria present two possible truths. One truth says that he's is going to be taken away and likely imprisoned for multiple charges. Another truth states that someone with more power than Gloria is going to come in and release the man formerly known as V.M. Varga, freeing him of any and all charges. We never see who walks through that door – but in a way, they're both lying. They're both stating a truth that hasn't happened yet.

Gloria ends the second-to-last episode finally being recognized by the automatic sensors that used to see right through her. She's finally realizing that if she wants to be recognized as real, she needs to make herself real. Even if she needs to lie to get there – which she does by telling her own truth about what is going to happen to Varga.

The season has twice made reference to Schrödinger's Cat – a thought experiment about a cat in a box that could be dead or alive, but cannot be revealed to be either until the box is opened. When the series ends, Gloria and Varga are both telling their own truth. Whoever believes their lie the most happens to be the person who is telling the truth. Until that door opens, they're both lying and both telling the truth and the same time. If you're going to survive in a post-truth era, Fargo argues that you need to establish your own to survive.

More like this
Twitter Got *Very* Emotional Over 'The Split’s “Perfect” Finale
By Sam Ramsden
The Time Traveler’s Wife Book Has A Heartbreaking Ending
By K.W. Colyard
Netflix Just Revealed When 'Never Have I Ever' Seasons 3 Will Premiere
By Gretchen Smail and Alyssa Lapid
'Unforgotten's Brand New Character Joins At A Pivotal Moment For S5
By Bustle UK
Get Even More From Bustle — Sign Up For The Newsletter