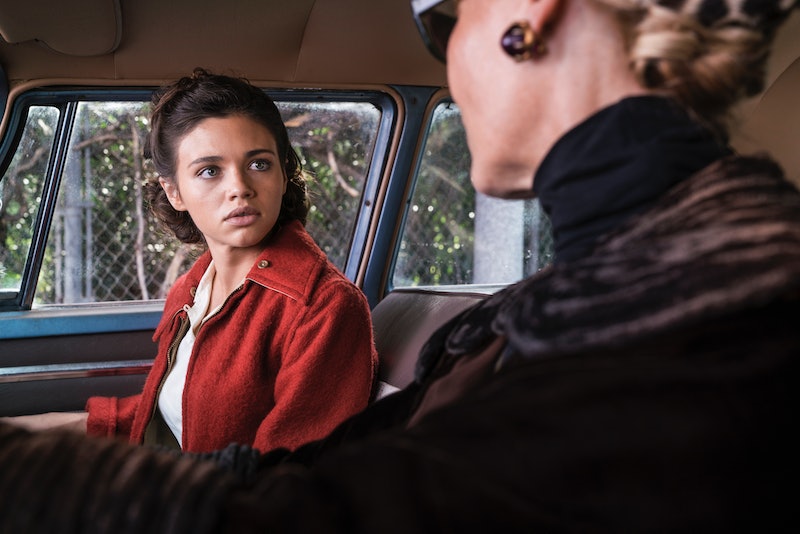 TNT's new miniseries, I Am the Night, brings to life the unbelievable true story of Fauna Hodel. Sadly, Fauna died before the show made it to TV, but it's based on her 2008 memoir, and the rest of the Hodel family has given I Am The Night their stamp of approval; Fauna's daughters, Yvette Gentile and Rasha Pecoraro, have actively supported the series on social media. (Bustle reached out to Fauna's uncle, Steve Hodel, for comment, but did not receive a response by the time of publication).

Update: Steve Hodel told Bustle via email that he's only seen trailers for I Am The Night, which "of course is a fictional version of the Black Dahlia investigation." He has, however, previewed the show's upcoming companion podcast, Root of Evil, and recommended it to viewers.

Earlier: The series' director, Wonder Woman's Patty Jenkins, also had a personal connection to Fauna. In an interview with The New York Times, she explained that a mutual friend introduced her to Fauna in 2008. Jenkins was immediately interested in telling Fauna's story and the pair became friends. According to The Hollywood Reporter, it was Fauna's death in September 2017 that finally prompted her and her husband, I Am the Night creator Sam Sheridan, to make the show. "We tried to honor the truth of her character as much as we could," Jenkins told the Times. "Hopefully, her wonderful spirit permeated everything."

Also per the Times, Fauna was only able to read the pilot script before her death, but her daughters were "granted generous access to the set during production." Gentile told the outlet that it brought her mom "back to life," and as their social media accounts show, she and her sister attended I Am the Night's New York and Los Angeles premieres. They even held a viewing party for the premiere episode.

Furthermore, Gentile and Pecoraro will be doing a companion podcast for the show called Root of Evil, which premieres on Feb. 13 and will outline more of their family's history.

Speaking to MEAWW, Gentile particularly praised India Eisley's portrayal of her mother, saying, "India is unbelievable as our mother. In real life, our mother was like a fairy. She was so deep and so spiritual and at the same time she was so clear and she had such intent of what she was here to do and India brought all of that and then some. When we saw the first screening of it all put together, my sister and I were blown away. She is such an incredible actress and an incredible human being."

Pecoraro added that they've become so close to Eisley that they "almost feel like we are family." She continued, "We became BFFs on set. India and I were always trouble because we were always in craft services talking. It wasn't us giving her advice on how to play mom, nor did she really outwardly ask for it ... she didn't really even have to ask questions. She just knew and she plays her so beautifully. [She is the] perfect person to play our mother. Mom would have loved India."

Besides Gentile and Pecoraro, another surviving Hodel family member is George's son and Fauna's uncle, Steve Hodel. While he has an active blog and Twitter account, he hasn't been as direct about his thoughts on I Am the Night, but perhaps he'll share more when he appears on Gentile and Pecoraro's Root of Evil podcast.

While the Hodel family has a complicated past, they seem grateful that I Am the Night has allowed them to share their side of the story with the world. "Without a shadow of a doubt the way all of this has come together for I Am the Night, as well as the podcast Root of Evil, it was all meant to be and I really believe that mom is orchestrating from above, sprinkling her fairy dust around everything," Gentile told MEAWW. "For everybody involved, this is more than just a project. It's something so much deeper than we can even explain and it all comes down to the basis of love and identity and searching for our true self, and so many other things on top of that."

So as you continue to watch Fauna's fascinating story unfold in I Am the Night, know that while not all of it is 100 percent true, her family thinks that she would absolutely approve of this miniseries.