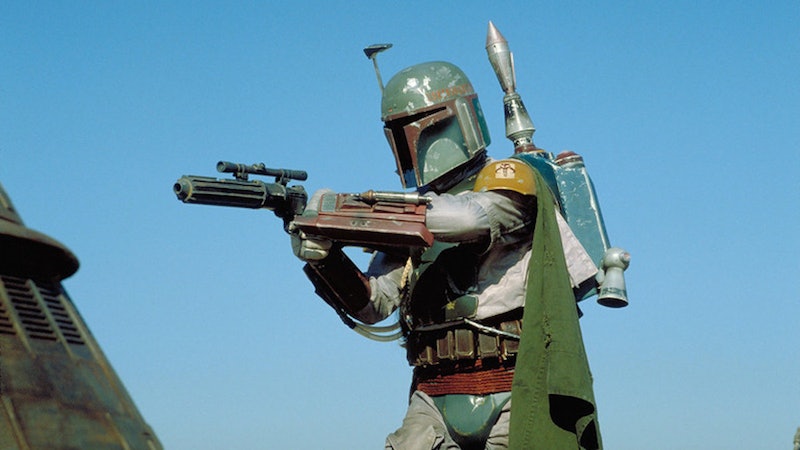 In a galaxy (not so) far, far away details of the upcoming live-action Star Wars series were finally shared with fans. Director Jon Favreau revealed that the title of the upcoming Star Wars streaming series is The Mandalorian. But, what does The Mandalorian mean for Star Wars fans? Likely, not what they were expecting. These may not be the bounty hunters fans were looking for, but it might have the Boba Fett connection they didn't know they needed.

In his Instagram post, which perfectly mimicked Star Wars' opening crawl text, Favreau shared a synopsis of The Mandalorian. He explained that his show, which will be available on Disney's untitled streaming service sometime next year, would be set in the years following Return Of The Jedi, "after the fall of the Empire and before the emergence of the First Order."

The Mandalorian will also introduce a new character that is reminiscent of a few old ones that happen to be very popular. "After the stories of Jango and Boba Fett," the post explained, "another warrior emerges in the Star Wars universe." The show, which Favreau will write and executive produce, will "follow the travails of a lone gunfighter in the outer reaches of the galaxy far from the authority of the New Republic..." That ellipses symbolizes that that's all the information fans are getting to get for now.

But the title alone shows that this new live-action series is delving into a popular segment of the Star Wars universe. According to the Star Wars Wiki, the Mandalorians "were a predominantly human ethnolinguistic cultural group who originated on the planet Mandalore. Mandalorians had a particularly unique role in galactic history as legendary warriors against the Jedi." The Mandalorians have a complex history, which includes an "internal conflict with other Mandalorian groups like Death Watch, who wanted to maintain the warrior ways of their Mandalorian heritage."

The timeframe for the reported 10-episode series also covers a segment of time that the Star Wars movies haven't delved into, meaning there could still be a lot for fans to learn. Possibly about the Fetts. While the show's description says it takes place "after their stories of Jango and Boba Fett," Esquire believes that the Fetts will play role in The Mandalorian since they are both from a Mandalorian planet.

As Esquire also pointed out, "Boba Fett (the clone of Jango Fett, who claimed to be from a Mandalorian planet), appeared to have died on Tatooine," a fact that may connect back to the new series. The Mandalorian started filming earlier this month and as i09 pointed out, leaked photos from the set of The Mandalorian seem to show a planet that looks a whole lot like Tatooine.

Screen Rant has already shared its theory that The Mandalorian will focus on Cobb Vanth, the man who stole Boba Fett's armor. Vanth was introduced in Chuck Wendig's Aftermath trilogy, which is set in the time period this show teases. According to Screen Rant, that trilogy also features a "'lone gunfighter' who wears Mandalorian armor, and he's fighting against injustice on the fringes of the galaxy."

The Mandalorian might also have a more current connection to the Star Wars Universe. The Star Wars: Rebels character Sabine Wren is also from Mandalorian and has been rumored to be the real mother of Rey. Could Sabine finally find her way into the live-action series and eventually the movies to solve the biggest mystery of the latest chapters?

For now that's unclear since information about the cast has been very hard to find and the casting rumors definitely haven't been confirmed by anyone at Disney. As for what the show may look like, back in May, Favreau revealed to Nerdist that the show would use the same motion capture technology that he used in his live-action adaptation of The Jungle Book. So, prepare to not only see new warriors, but to see Star Wars in a whole new way that may or may not feature a Fett or two.

More like this
The 50 Most Powerful Characters In The Marvel Universe, Ranked
By Johnny Brayson and Nola Pfau
'The Rings Of Power' Episode 7 Will Feature An “Unlikely Pairing Of Characters”
By Grace Wehniainen
These Memes & Tweets About Alicent in 'House Of The Dragon' Prove She's The Queen Of Messiness
By Grace Wehniainen
Twitter Is Still Reeling Over 'Bake Off's Surprise Competition Twist
By Bustle UK
Get Even More From Bustle — Sign Up For The Newsletter