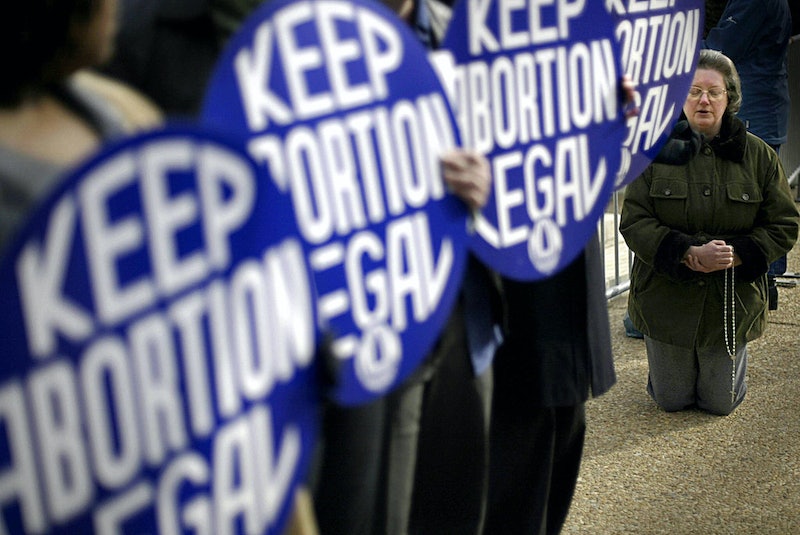 Just a few days before Donald Trump took the oath of office and became the 45th president of the United States, Republicans in the House of Representatives introduced a new iteration of a bill that has become synonymous with the extreme anti-choice right-wing — yet another fetal "personhood" bill. The latest version of this terrifying legislation states that life begins at fertilization, and the language of this fetal "personhood" bill doesn't stop there in its absurdity.

Also known as the "Sanctity of Human Life Act," House Resolution 586 is relatively short doesn't involve much legal jargon, meaning that its message isn't too difficult to understand. In its second section, the bill states that:

(A) the right to life guaranteed by the Constitution is vested in each human being, and is the paramount and most fundamental right of a person; and

(B) the life of each human being begins with fertilization, cloning, or its functional equivalent, irrespective of sex, health, function or disability, defect, stage of biological development, or condition of dependency, at which time every human being shall have all the legal and constitutional attributes and privileges of personhood; and

(2) the Congress affirms that the Congress, each State, the District of Columbia, and all United States territories have the authority to protect the lives of all human beings residing in its respective jurisdictions.

HR 586 doesn't end there in its anti-choice terminology — the bill's writers go on to describe the conditions that result in fetal personhood, which includes an anti-choice twist on a textbook definition of fertilization:

The term “fertilization” means the process of a human spermatozoan penetrating the cell membrane of a human oocyte to create a human zygote, a one-celled human embryo, which is a new unique human being.

Perhaps the most chilling part of the "Sanctity of Human Life Act," however, is its definition of "human being":

The terms “human” and “human being” include each and every member of the species homo sapiens at all stages of life, beginning with the earliest stage of development, created by the process of fertilization, cloning, or its functional equivalent.

Under this definition, a fertilized zygote has the same rights as a full-developed and already-born human, and as such, cannot be "killed" via abortion. Not only would this definition make all abortion illegal — it would also make the use of emergency contraception illegal, and could jeopardize the legality of In Vitro fertilization practices because they alter fertilized eggs.

Other attempts at "personhood" bills like HR 586 have died in Congress, and its sister bill, the total abortion ban "heartbeat" bill, is also a long-shot. However, the unlikelihood of an immediate repeal of Roe v. Wade hasn't stopped Congressional House Republicans from passing HR-7, a bill that bans insurance coverage for abortion, and there's a chance it'll pass the Republican-controlled Senate as well. If it passes the Senate, it'll then land on the desk of President Trump, and at that point there's little doubt that it'll become law.

The rapid-fire introduction of these draconian anti-abortion bills constitutes one of the most aggressive attacks on reproductive rights the nation has seen, and are terrible tidings of what's to come. The "personhood" bill might not pass this time, but there's no doubt that Republicans, emboldened by their new president, won't stop trying.