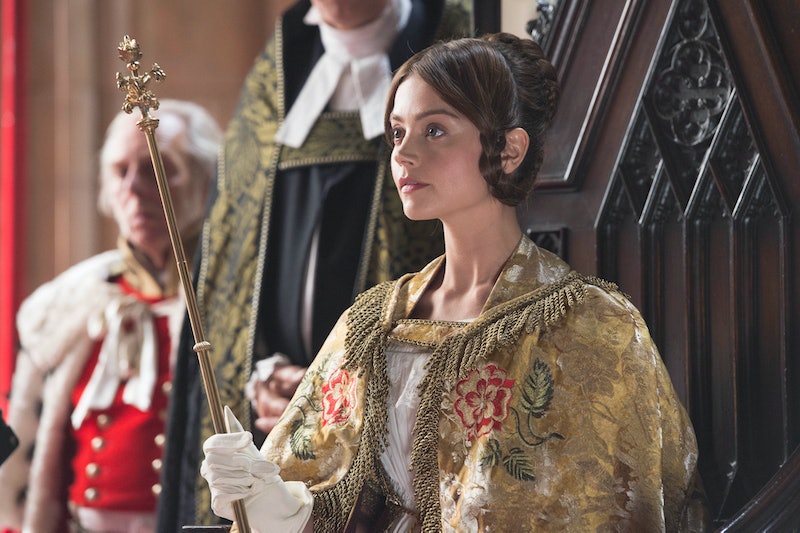 The life of one of the most famous monarchs ever is about to hit our TV screens. Victoria premieres on PBS on Sunday, Jan. 15 at 9 p.m. ET, and it's going to give us a whole new look at how this teen queen became one of the most influential monarchs of all time. Though Queen Victoria reigned from 1837 to 1901, her ancestors are still alive and ruling over the United Kingdom today. Queen Victoria was Queen Elizabeth II's great-great-grandmother. So considering the fact that this period drama has already premiered and finished out its first season in the U.K., I'm definitely curious to know what the royal family thinks of Victoria. But, a rep for the Royal Communications office had no comment on the TV drama. So it looks like we won't know for sure if the members of the royal family have seen the show and, if so, what they think about it.

But Victoria's series creator and writer Daisy Goodwin gave an intriguing response when asked if she's heard any reaction from the royal family about the series at one of Masterpiece's panels at TCA last July. “I know people who know people who’ve said things,” she said, according to Deadline. The outlet also reported that Goodwin and Victoria's executive producer Rebecca Eaton claim that the royal family knows about the series and are allegedly "not unhappy" with how it turned out.

Of course, Queen Victoria and Queen Elizabeth II will always be linked and not just because they're related. Queen Victoria's reign of nearly 64 years was the longest in U.K. history before Queen Elizabeth II became the longest-reigning British monarch in 2015. When She officially took the title, Queen Elizabeth II didn't express any superiority over Queen Victoria or even mention her by name. She accepted the honor with humility and said it was "not one to which I have ever aspired," BBC News reported at the time. "Inevitably a long life can pass by many milestones - my own is no exception - but I thank you all and the many others at home and overseas for your touching messages of great kindness," she said.

The actress who plays Victoria in the series, Jenna Coleman, has a real-life connection to the royal family. There have been rumors of Coleman's romance with Prince Harry in the past, which led to a cringeworthy interview on Good Morning Britain last August when the actress was asked if the two were together because of her "research" for the role. "No, he's a friend of mine," Coleman clarified while looking a little uncomfortable. That makes me wonder if Prince Harry has watched any of Victoria to support his pal, though.

As for yourself, well, you don't need the Queen of England's permission to check out Victoria. So be sure to tune in Sunday night if you want to have a royally good time.