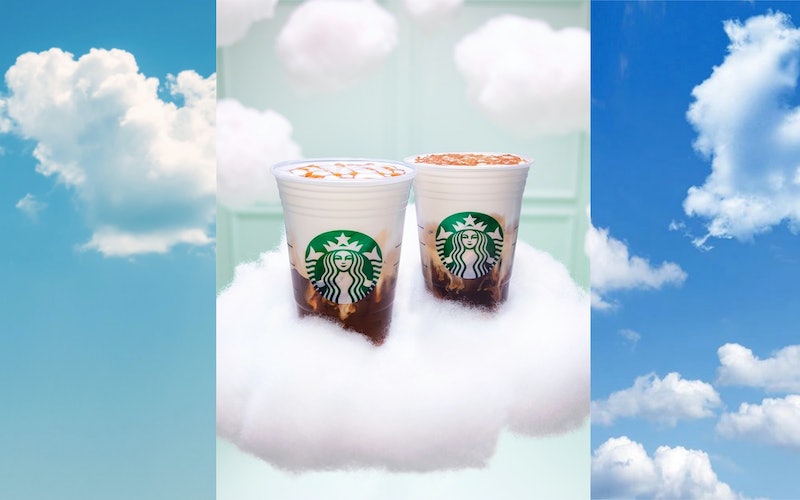 After a long series of cryptic cloud tweets, memes, and Instagrams early this week, Starbucks has finally lifted the fog on its latest news: starting March 5, Cloud Macchiatos will be a permanent offering on the menu. While this news sounds delicious by virtue of its name alone, you're likely wondering what the Starbucks Cloud Macchiato actually tastes like. After all, it's safe to say most of us haven't licked a cloud, save the skydivers and hot balloon adventurers among us.

Well, thanks to the good old buck of stars, now us regular people on the ground will get to taste the sky, too — and I can confirm that it is delicious. Bustle had the opportunity to try the new Cloud Macchiato before it formally hit the menu, in both of its forms: the Iced Caramel Cloud Macchiato and Iced Cinnamon Cloud Macchiato.

While the drinks themselves are phenomenal, the real star of the show is, of course, the "cloud" topping that gives the drink its name. Made with cold milk foam, the topping has a light, almost meringue-like consistency with a subtle sweetness. The top is finished off with Starbucks' signature caramel drizzle cross-hatch, giving it a little extra pizzazz — a silver lining to your delicious cloud, if you will.

The drinks themselves offer two options, depending on your mood — one for Starbucks fans looking for a twist on an old fave, and the other for the more adventurous. The Caramel Cloud Macchiato is essentially a Caramel Macchiato with the new cloud topping on it, which pair perfectly together; the Iced Cinnamon Cloud Macchiato, on the other hand, has a hint of lemon, which adds a delightful tang to the cinnamon and coffee, like a sun ray bursting through your metaphorical coffee cloud.

The other cool thing about this new foam topping is that it really holds its shape — while whipped topping tends to sink right into a drink, and even the typical cold foams tend to dissolve after a bit, this one stayed floaty and light on top of the drink for the better part of a half hour (and probably would have stayed that way, if I hadn't consumed it). This makes it an ideal choice for those among us who have a tendency of forgetting their drink midway through the morning rush — the cloud foam is much more forgiving in that regard.

The drinks will be available both hot and iced, and although it may seem counterintuitive in the middle of winter, I highly recommend you stick with iced. This is coming from someone who is both a big baby about the cold and also sampled these drinks coming in from "someone ticked off Elsa" weather just minutes before — the flavor profiles really shine in iced form, and the cold adds some buoyancy to the new cloud foam.

Again, these new items just hit the permanent menu, so there's no need to rush — but I'd let this cloud magic into your life sooner rather than later. The drinks are available starting Tuesday, March 5, so go out and live your cloudiest, most Instagrammable dreams.