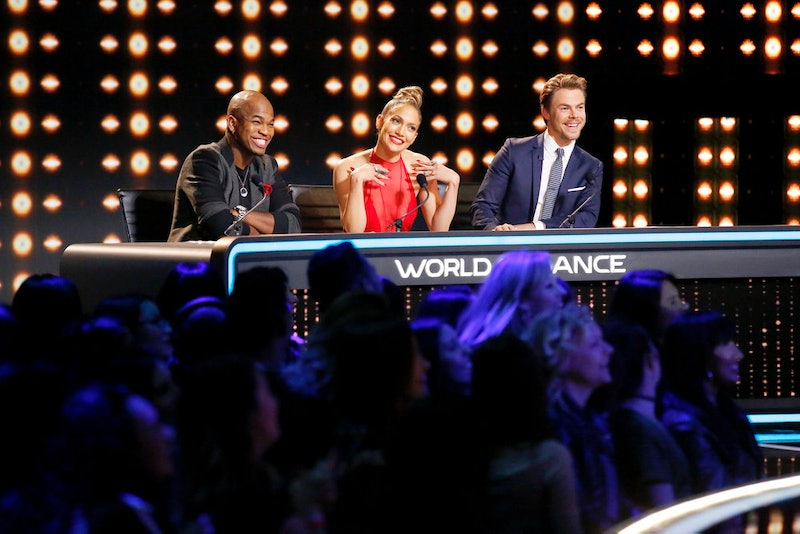 Jennifer Lopez's new dance competition show is about to sashay onto your television. The new competition series World Of Dance premieres on May 30 and promises grandeur, talent, and fierce competition. Dance groups, couples, and soloists will compete in dance battles in a variety of styles. They'll be judged by executive producer and multi-hypenate artist Jennifer Lopez, Derek Hough, and NE-YO. While one of the draws for these dancers is to perform on a national stage, the ultimate prize has a lot of zeros attached to it. What does the last dance group or soloist standing win on World Of Dance? Bragging rights aren't the end of it.

World Of Dance is pulling out all the stops to try to win the summer reality audience. There's the all-star panel, Jenna Dewan Tatum serving as a host and mentor, plus a league of extremely talented dancers. And that flashy $1 million grand prize is World Of Dance's way of saying, "We mean business."

What I'm most looking forward to from this show are creative dance routines from performers of all ages. The competition part is the frosting on top. But in a TV landscape with a range of competition shows — and specifically dance competition shows — World Of Dance's goal has to be to stand out from the pack. Lopez says in a promo that she and her team wanted to create "the Olympics of dance".

According to NBC, World Of Dance competitors will be divided into categories: junior (17 years old and younger), upper (up to four performers) and team (five or more dancers). I like that there are a range of ages, groups, and styles of dance that are going to be represented on the show. If this really is the "Olympics" of competition dance, then the demographics can't be too specific.

A couple of performances have been shared online already, and it looks like audiences are in for some impressive routines. Kinjaz, who already have a fanbase of their own, are a part of the competition. So, the World Of Dance grand prize is enticing to even established dancers and groups.

If the pot wasn't so hefty, it's possible that the show wouldn't have been able to pull the level of talent that it has. Experienced dancers and bright-eyed newcomers will have the chance to either up their established profile or create a name for themselves, not to mention score some serious cash.

But the best part of competition talent shows, in my opinion, is the interaction between up-and-coming performers with established forces in entertainment. In singing shows like The Voice and X-Factor, general talent shows like America's Got Talent, and now World Of Dance, watching celebrities mentor newbies is fun. Oftentimes the celebrities see early versions of themselves in their mentees. Lopez and her fellow judges have the opportunity to shape some careers here.

I'm looking forward to watching the dancers take the stage, the fans tweet their opinions, and some lucky person or group go home a little (okay, a lot) richer with what the network calls "a life-altering grand prize."