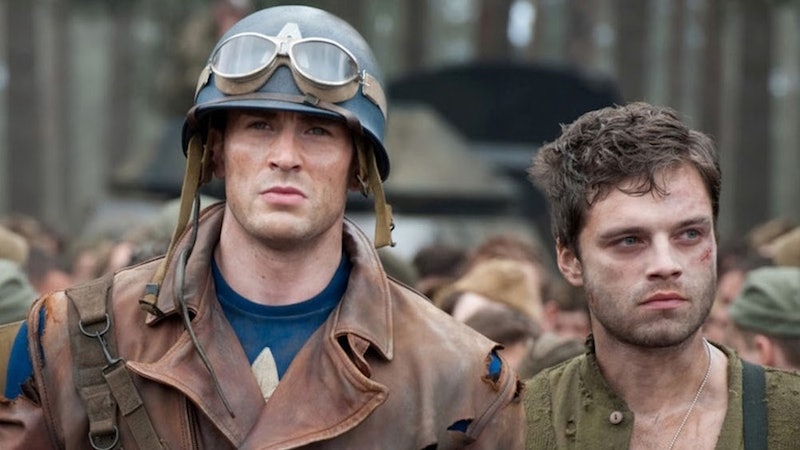 The end might be near for Captain America — or, at the very least, Avengers: Endgame seems to be the end for Chris Evans. But, those who have been stanning for Cap since day one know he'll really be with fans much longer, like say "till the end of the line." Non-Captain America stans might be asking themselves, what does "till the end of the line" mean? Well, get the tissues because things are gonna get emotional real quick.

From his very first appearance in Captain America: The First Avenger, Captain America's greatest bond has been with his buddy Bucky Barnes. In the first Captain America film, Bucky accompanies Steve home after his mother's funeral, and after Steve swears he can get by on his own, Bucky tells him, "The thing is, you don't have to. I'm with you 'til the end of the line, pal."

These kind words were a reminder to Steve, who was not yet the bulked up Captain America we've all come to love, that no matter what happens he'll be there for him. Through the good and the bad there's nothing that could tear them apart. Sweet, right? So, when Captain America repeats these words back to Bucky 70 years later, the sentiment hasn't changed, even though they have.

In Captain America: First Avenger, Bucky appears to die after falling from a moving train, but in The Winter Soldier, Captain America learns that Bucky is actually still alive and acting as HYDRA's genetically modified killing machine better known as, yes, the Winter Soldier. He's not the Bucky that Steve grew up with in Brooklyn, but Steve believes that Bucky is still in there somewhere, he just has to remind him of that. And what better way to do that then to repeat a very significant phrase back at him in hopes of jogging his memory.

As Captain America battles it out with Winter Soldier in the Captain America sequel, he tries to remind the Soldier that they've been friends their entire lives. "Your name is James Buchanan Barnes," a battered and bloody Cap tells Bucky, before taking another metal punch to the face. "I'm not going to fight you," Cap says while throwing down his shield. "You're my friend."

But the Winter Soldier has been tasked with taking him out and isn't interested in failing. As the Winter Soldier continues to punch Captain America in the face, repeating "you're my mission" over and over, Steve says the words that he hopes will change his best friends' mind. "Then finish it," Steve says, "'cause I'm with you till the end of the line."

The bond between Cap and Bucky is summed up in this one line. Their loyalty is unwavering, it even caused Captain America to fight Iron Man in Civil War. "Till the end of the line" means that they'll fight for each other and alongside each other until their dying day. And that day might just be coming in Endgame.

Basically, we all need to find someone who loves us the way Steve Rogers loves Bucky Barnes. In fact, it's possible that Steve loves him so much that he's willing to pass his shield to Bucky after Endgame. Already, there's rumors that Bucky could be the next Captain America. But, let's assume, whatever comes next, these two besties will be there for one another "till the end of the line."