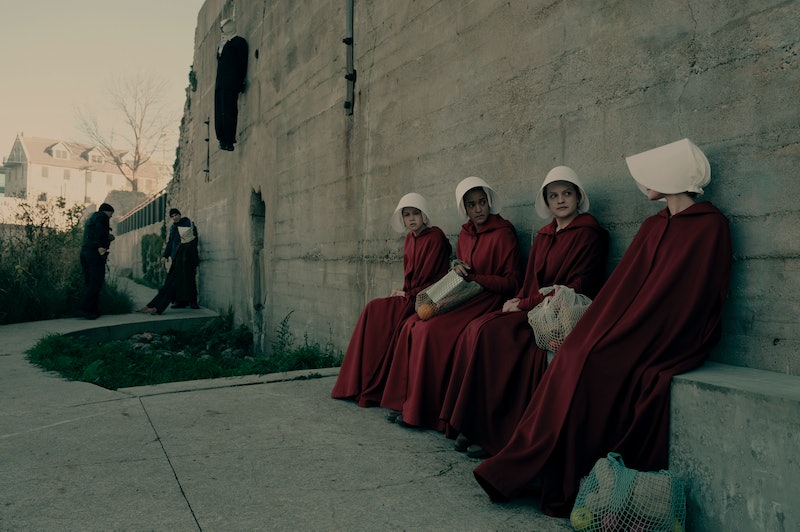 In Margaret Atwood's 1985 dystopian novel, The Handmaid's Tale, which is now been adapted into a series for Hulu, The United States as you know it now has been transformed into patriarchal, overtly religious, totalitarian society called Republic of Gilead. In this new society, families are broken up, men are fully in power and women are assigned a life based on their fertility. Handmaids are forced to become surrogates for high-ranking couples and can often be heard using the phrase, "Under his eye." So, in this specific dystopian future, what does "under his eye" mean?

Well, first you need to be well aware of that the Republic of Gilead as it's written in Atwood's book is a highly theocratic, totalitarian society. In this society, everyone is under the watchful eye of spies and secret police who are seen as literally the eyes of God. These eyes report any activity that could be seen as going against the new order.

In this new order, handmaids are women that are fertile and are assigned to a higher ranking, wealthy couple to engage in scheduled, bizarre sex rituals to ideally conceive a child to give to them. If a woman is not fertile or does not want to conceive a child, they are labeled unwomen and are sent to clean up toxic, radioactive waste in the Colonies. When the handmaids speak to each other, they are encouraged to use the phrase, "under his eye" as a constant reminder of the fact that "he" is always watching everything they do and day.

This phrase obviously brings to mind commonly used phrases like "Big Brother is always watching," and religious tenets that refer to the belief that God sees all. The Republic Of Gilead rules with an iron fist and discourages independent thought. It's how they rose to power and how they hope to keep it. The order not only controls what the handmaids do with their bodies and where they live, but even how they think. A repeated phrase like "under god's eye" ingrains the idea that everything they do is owned and monitored by someone else. And by pegging the phrase to "god," the Republic encourages the handmaids to think of their oppressive government as a benevolent watchful force, with their best interests in mind.

Details like the repeated use of "under god's eye" make The Handmaid's Tale a terrifying and terrifyingly possible dystopian future.

More like this
Howard Stern's Net Worth: Is He The Richest Man In Radio?
By Hugh McIntyre
Superman & Lois Season 3 Will Introduce A Complicated New Supervillain
By Brad Witter
Everything To Know About True Detective Season 4
By Brad Witter
Only 3 Of The One That Got Away Couples Seem To Still Be Together
By Brad Witter
Get Even More From Bustle — Sign Up For The Newsletter