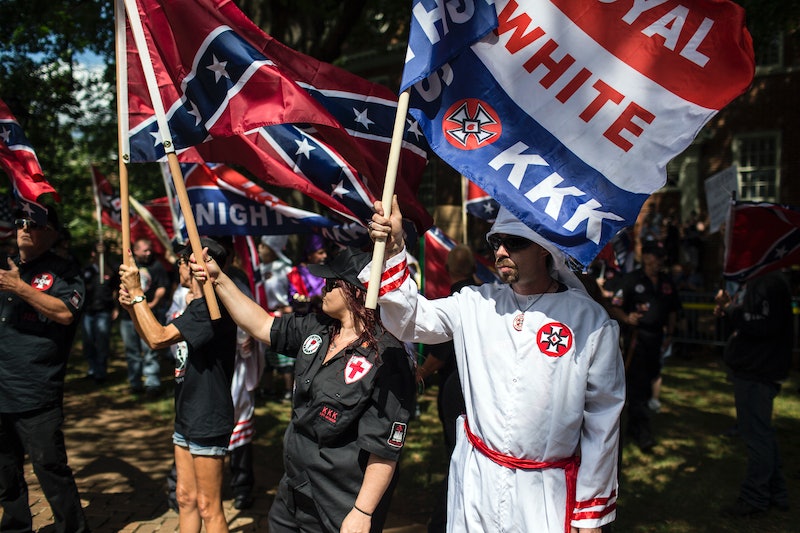 News of a white supremacist rally in Virginia dominated headlines on Saturday. Photos and videos of torch-carrying, Nazi regalia-wearing crowds marching through the University of Virginia campus chanting racist slogans rapidly spread on social media and sparked outrage. But what did those taking part in the "Unite the Right" rally want exactly?

As most would probably expect, the messages supporters of the "movement" are primarily concerned with pushing are heavily anti-immigration, anti-LGBT, anti-Black Lives Matter, and pro-"white rights."

As the League of the South, a Southern nationalist organization, described it, the rally was meant to be an "event which seeks to unify the right-wing against a totalitarian Communist crackdown, to speak out against displacement level immigration policies in the United States and Europe, and to affirm the right of Southerners and white people to organize for their interests just like any other group is able to do, free of persecution."

What initially sparked the rally was controversy over the removal of a statue of Confederate Gen. Robert E. Lee from Emancipation Park, where the demonstration was to take place. In April, the Charlottesville city council voted in favor of its removal. The park's name, formerly Lee Park, was also changed.

Jason Kessler, a white nationalist blogger who organized the demonstration, attended the Charlottesville city council meetings to argue against the statue's removal in June. After being repeatedly interrupted by civil rights activists who were eventually escorted out, Kessler attacked Councilors Wes Bellamy and Kristin Szakos for favoring "anti-fascist" activists.

“You don’t give a damn about white people,” he said. “You people are implementing policies which are displacing us in our home countries, and we will not be allowed to survive. You don’t even recognize our right to exist.”

On Friday and Saturday, supporters of Kessler's march chanted the Nazi slogan "blood and soil" and phrases like "white lives matter." A large crowd was caught on video chanting "fuck you f*ggots."

David Duke, former Grand Wizard of the Ku Klux Klan, characterized the rally as a sign of white America's determination to dominate society. “This represents a turning point for the people of this country,” he said. "We are determined to take our country back."

In a set of damning statements for the president, Duke further went on to say that the rally reflected Trump's campaign promises. “We are going to fulfill the promises of Donald Trump,” Duke said. “That’s what we believed in, that’s why we voted for Donald Trump, because he said he’s going to ‘take our country back’ and that’s what we gotta do.”

The president responded Saturday afternoon to the situation in Charlottesville on Twitter. "We ALL must be united & condemn all that hate stands for," he wrote. "There is no place for this kind of violence in America. Lets come together as one!" He added, "Am in Bedminster for meetings & press conference on V.A. & all that we have done, and are doing, to make it better-but Charlottesville sad!"