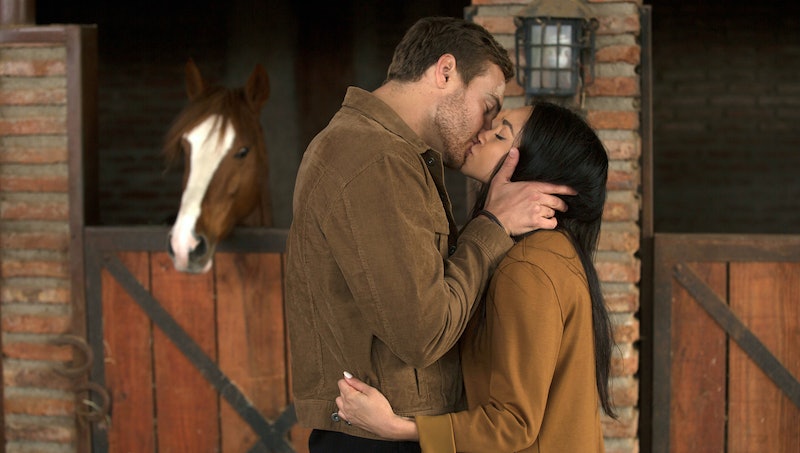 It's hard to keep track of all the controversies that have happened so far on The Bachelor Season 24. First there was champagne gate, then the Alayah "finasco," and finally Cosmopolitan's cover photoshoot scandal. However, perhaps the biggest sleeper agent for chaos has been Victoria F. on The Bachelor who is, against all odds, still in the running for Peter's heart.

The Ringer's podcast Bachelor Party cohost Amelia Wedemeyer said it best when she referred to Victoria F. as "villainess of the season" and asked "why the f*ck is she still on this show?" It's a valid question, but audiences also know that Peter is seemingly incapable of making decisions, so this is all par for the course.

There were certainly red flags about Victoria F. early on — her bad joke and subsequent need for Peter to remember it, her freakout over seeing ex Chase Rice, which was no doubt a ploy by the producers to manufacture drama — but fish really hit the fan when audiences learned about her White Lives Matter modeling gig.

It's not what it sounds like — well, it kind of is. Victoria F. posed for a company called We Love Marlins, according to Us Weekly, but the brand's campaign used racist language and imagery to promote its cause. (Their "White Lives Matter" slogan referred to white marlins, and another shirt in the campaign depicted a Confederate flag with fish instead of stars.) After fans dug up these photos, Cosmo decided to cancel their digital cover contest, which Victoria F. had won.

The magazine's editor-in-chief, Jessica Pels, published an online statement, condemning the White Lives movement and explaining why they wouldn't be publishing the Bachelor contestant's cover. "In my view, the nature of the [We Love Marlins] organization is neither here nor there — both phrases and the belief systems they represent are rooted in racism and therefore problematic," she wrote, in part.

Victoria F. responded to the backlash in the Instagram comments, per Us Weekly. "In regards to a sensitive topic, I come from a very diverse background & am in support of all races!" she wrote. "Virginia Beach is a VERY large fishing town where Marlin tournaments are held every year." However, she continued in another comment, saying, "I definitely see how this could be offensive. I apologize immensely it was never my intention to lessen this matter."

Despite responding to this scandal — not to mention her long November 2019 Instagram post telling her followers not to listen to rumors about her love life — Victoria F. has remained mum about her true feelings about The Bachelor. She has, however, posted occasional Instagrams about Season 24. She's even poked fun at herself, writing on Jan. 13, "Will I cry tonight? Probably." Ahead of Week 6, she posted a photo of her and Peter in Chile, captioning it with, "Don't let this picture fool you, we spilled our wine & he almost dropped me #youredoinggreatsweetie."

But while it seems like Victoria F. is putting on a brave face, Hannah B. appeared to have some choice words for her. According to Cosmo, the former Bachelorette was filming herself watching the series on Instagram Stories when audiences heard Victoria F. say in the background, "It's annoying to be around me." Hannah B. stopped mid-sentence and told the camera, "Well, you said it! Um, anyhoo..."

As Peter and his four remaining suitors head into hometowns next week, there's predictably no sign of this season's drama slowing down. Victoria F.'s hometown date is sure to be chaotic. Next week's episode teaser looks sufficiently dramatic and Us Weekly reported that Peter's ex-girlfriend who also knows Victoria shows up to "warn" him about her. She and Peter appear to get into a huge fight, which leaves her crying.

Victoria F. may be keeping her opinions to herself for now, but this season has been incredibly emotional for everyone involved. The Women Tell All and After The Final Rose specials can't come soon enough.

More like this
Victoria J. Confirmed Her Divorce With Her 'Bachelor' Casting Announcement
By Grace Wehniainen
The Bachelor’s Christina Mandrell Comes From One Of Country Music’s Most Famous Families
By Brad Witter
Tahzjuan Took A Cruise With These Bachelor Nation Alums After Visiting Zach's Season
By Kayla Blanton and Grace Wehniainen
This 'Bachelor' Contestant Had The Best Reaction To Wearing The Same Dress As Another Woman
By Grace Wehniainen
Get Even More From Bustle — Sign Up For The Newsletter
From hair trends to relationship advice, our daily newsletter has everything you need to sound like a person who’s on TikTok, even if you aren’t.