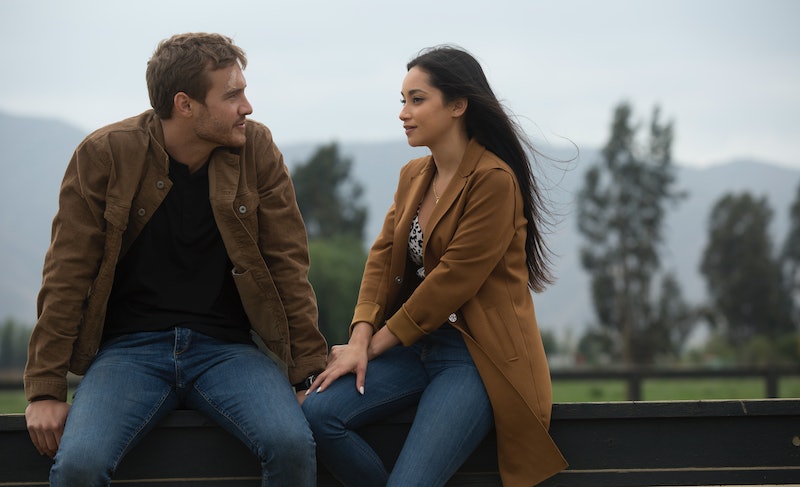 As ABC has now reminded viewers, "Victoria's Secret" isn't just a lingerie retailer. Entertainment Weekly's exclusive preview of Victoria F.'s Bachelor hometown date with Peter on the Feb. 17 episode (kind of) revealed a "mystery woman," who seems to have some potentially damaging information. Judging from Peter's reaction to her calling out his name, the surprise guest — who's almost completely blurred in the clip EW shared on Feb. 12 — seems to be someone from .

"She brought some stuff to my attention that she thought I should know," Peter tells Victoria F. in a subsequent scene. Cue a dramatic confrontation with Pilot Pete "asking for the truth," and the Virginia Beach native firing back, "It doesn't matter anymore, Peter!" In a Feb. 11 YouTube Bachelor promo, the argument seemed to escalate from there, with Victoria F. asking how they're supposed to move forward. Oh, and this was all apparently going down hours before Peter was supposed to meet her family.

While fans will have to wait until ABC airs the episode to get all the details, it seems safe to assume that Peter's other three hometown dates weren't quite as explosive. That's not to say the sneak peek didn't also hint at drama and tears elsewhere, however. Aside from Victoria F., the other remaining women include Madison (Auburn, Alabama), Hannah Ann (Knoxville, Tennessee), and Kelsey (Des Moines, Iowa).

This isn't the first time Victoria F. has stirred controversy in recent weeks. After learning that she had appeared in a campaign that mocked the Black Lives Matter movement, Cosmopolitan pulled their digital March cover that featured her and Peter. (For the incident in question, Victoria F. had modeled clothing with a "White Lives Matter" slogan in a campaign advocating for white marlins. The ads also used images of the Confederate flag.)

"Unequivocally, the White Lives Matter movement does not reflect the values of the Cosmo brand," editor-in-chief, Jessica Pels, wrote in a Feb. 3 statement on the magazine's website. "We stand in solidarity with Black Lives Matter, and any cause that fights to end injustices for people of color."

For his part, Peter has defended Victoria F. during a recent Build series interview. He implored viewers to form their opinions "based on what they see between the two of us and her time on the show," during the chat. "She's not perfect, I'm not perfect, no one's perfect, but, yeah, that's all I can really say on that," Peter concluded.

More like this
Zach Swears He Didn’t Look Up Contestants Before The Bachelor Began Filming
By Brad Witter
The Bachelor’s Christina Mandrell Comes From One Of Country Music’s Most Famous Families
By Brad Witter
10 Photos Of The Wildest Limo Arrivals From 'The Bachelor' Premiere
By Brad Witter
All The Clues Clint & Gina Aren’t Still Together After 'MAFS' Season 16
By Brad Witter
Get Even More From Bustle — Sign Up For The Newsletter
From hair trends to relationship advice, our daily newsletter has everything you need to sound like a person who’s on TikTok, even if you aren’t.