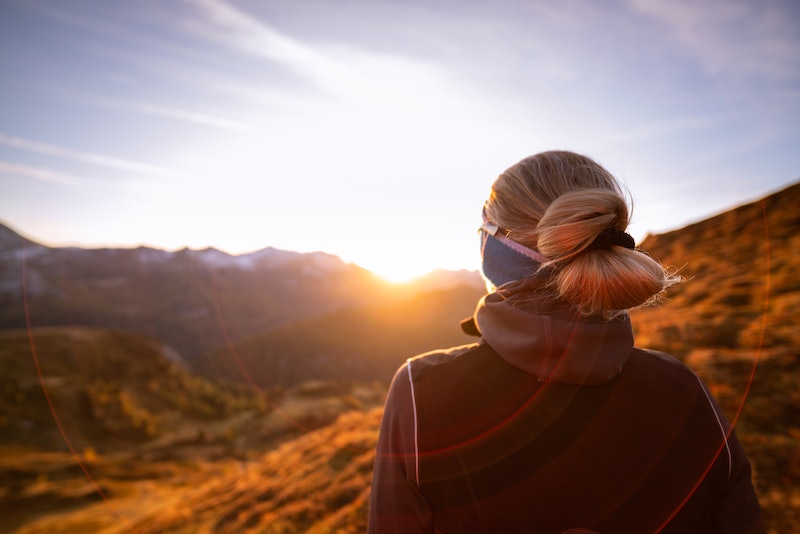 At some point, usually around the age of 50, your ovaries produce fewer hormones, your periods end, and you're in menopause. For some people, menopause can happen earlier than that. A 2013 study published in Annals of medical and health sciences research found that around 1% of women experience early menopause, and there isn't a lot of awareness for it. Women who've gone through premature menopause tell Bustle that it can be a very emotional and complex experience. It can also be intertwined with medical issues and concerns about femininity and sexuality.

Dr. Felice Gersh M.D., an OB/GYN, tells Bustle that premature menopause can happen as a consequence of chemotherapy, hysterectomies, and other medical treatments. It can also have a genetic component; if your mom went through menopause early, it's more likely that you will too. (According to the Office of Women's Health, premature menopause is technically when you go through it before the age of 40; early menopause refers to going through it between 40 and 45, but the two are sometimes used interchangeably.) It's also more common in people with high levels of stress and those who work night shifts, though research hasn't uncovered why this might be.

For Wendy, 38, premature menopause came as a result of cancer treatment. "I was 36 when I was diagnosed with a rare form of breast cancer called inflammatory breast cancer that is very aggressive," she tells Bustle. "When I underwent chemotherapy, it began the process of early menopause. My periods ended and I haven’t had one since."

Stacey, 37, tells a similar story. "I was diagnosed with stage 3 Hormone receptor positive breast cancer, both ER/PR, two weeks before my 36th birthday, and put into forced menopause when I started [chemotherapy drug] Taxol in April of 2018," she says. Some kinds of chemotherapy can cause lasting damage to the ovaries because it can kill ovarian cells, resulting in menopause.

It's no surprise that, for people who've been through it, adjusting to early menopause can be difficult. "The medical impact of the loss of ovarian hormone production that occurs with menopause is huge and widespread throughout the body," Gersh tells Bustle. Menopause causes drops in estrogen that then affect your mood, bones, immune system, heart health, and other aspects of your body.

The symptoms of premature menopause aren't different from typical-onset menopause. "I suffered terrible hot flashes, mood swings, some loss of libido and vagina dryness," says Wendy. Stacey says she experiences up to five or six hot flashes a day, sudden mood swings, and problems with sexual lubrication. "The vaginal dryness is no joke," she tells Bustle. "With the help of my OB/GYN I’m able to finally get back in the game; she prescribed me lidocaine, and that is a lifesaver."

"The emotion that comes over me is something I don’t have control over."

In addition to dealing with the symptoms of menopause, going through menopause young can also be an emotional process. Wendy tells Bustle that her oncology and gynecology treatment teams told her different things about whether she was really entering menopause, which she says was frustrating.

Early menopause also brings its own kind of grief. Stacey says that while her own symptoms haven't been difficult, the emotional onslaught, enhanced by the mood swings of menopause, has been hard. "It's very frustrating at times because the emotion that comes over me is something I don’t have control over," she tells Bustle. "Over time I’ve gotten better at recognizing it and not allowing it to take over."

It can also mean mourning lost opportunities. "I feel like having been diagnosed with breast cancer has taken so many things away from me," Wendy says. "First, it took my breast, then my ability to have children, then it messed with my sexuality and femininity as I venture into this early menopause abyss." A 2016 study published in JAMA Psychiatry found a link between early menopause and symptoms of depression later in life, though the study doesn't identify whether that risk is due to shifts in hormones, the emotional effects of early menopause, or both.

Early and premature menopause needs to be less taboo, women who've been through it tell Bustle. If you're going through premature menopause, check out support networks Early Menopause and The Daisy Network for resources and help. "There needs to be more awareness about this topic," Wendy says, "so women can know what to expect and know that they are not alone."

More like this
This Company Will Send STI Tests Right To Your Door
By Lexi Inks
6 Unexpected Causes Of Post-Workout Fatigue
By Carolyn Steber
I Visited Remedy Place, The Social Club Transforming The Wellness Industry
By Rachel Lapidos
The 8 Best Pilates Exercises For Lower Back Pain
By Carolyn Steber
Get Even More From Bustle — Sign Up For The Newsletter