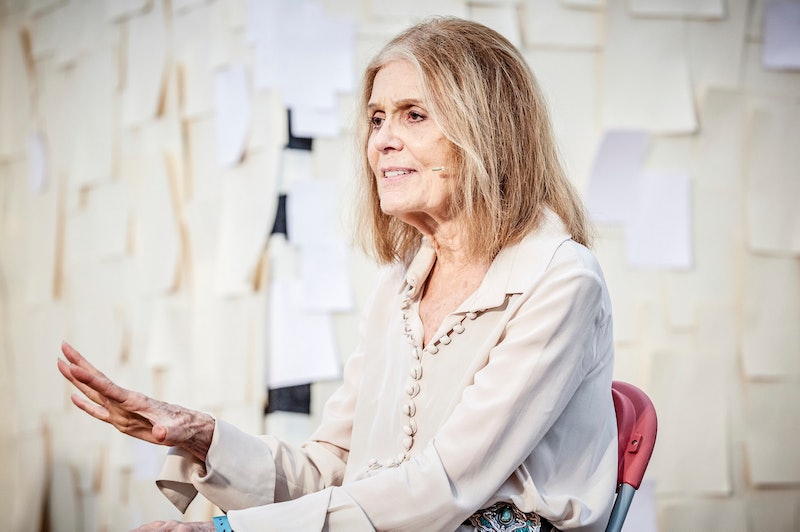 When children die at the hands of white men with guns, it's rarely blamed on white men or guns. "It's mental health issues," they say. "He needed help," they insist. But one of the world's most famous feminists isn't having any of that. In an exclusive interview with Bustle, Gloria Steinem says guns and men are absolutely the reason there's such an extraordinary amount of gun violence in America. And for those who claim mental health issues are the cause of mass shootings?

"Well in that case, masculinity is a mental disease," she says.

June 1 is National Gun Violence Awareness Day, when thousands of people across the country wear orange to remember those who lost their lives from gun violence. The day feels more prominent than ever this year, in the aftermath of shootings like the one in Parkland, Florida, that left 17 people dead, and the recent one in Santa Fe, Texas, where 10 people were killed.

"Masculinity is a mental disease."

"Guns are related to masculinity," Steinem tells Bustle. "The impulse to have a gun and the habit of buying guns is way more prevalent among males than among females, even though one might think that in terms of protection, it might be the other way around."

When it comes to the shooting in Santa Fe, much of the attention looked at the fact that the shooter had recently been rejected by a girl he liked. "He kept making advances on her and she repeatedly told him no," Shana Fisher's mother, Sadie Rodriguez, told the LA Times. "A week later he opens fire on everyone he didn't like."

"When they are not able to dominate others, then they kill in order to prove their power."

"What makes him think that he has a right to be accepted by that girl — that's the problem," Steinem says, referring again to the prevalence of white male shooters. In fact, research by Eric Madfis of the University of Washington, Tacoma, concluded that young, white men commit mass murders "in numbers disproportionately high relative to their share of the population."

"In other words," Steinem says, "they are exactly the group of people who are most likely to have been told by society that they have a right to dominate others. And when they are not able to dominate others, then they kill in order to prove their power."

How To Talk To Women Who Love Guns

Considering the influence of the National Rifle Association and how American society views guns — and especially considering the stats on how gun violence affects women — Steinem says an American feminist cannot be pro-gun.

As Steinem points out, guns are often marketed to women as a way to protect themselves — whether from an unknown intruder or from a domestic abuser. But a woman is more likely to die from a gun than she is to be protected by it. Arthur Kellerman's oft-cited study on injuries and deaths from firearms in the home found that it is much more likely for a gun to be used in an assault, suicide, or accidental shooting than it is to be used for self-defense.

"The people most likely to be hurt by guns are the people in house where they are, not strangers."

Women, or feminists, who consider themselves pro-gun need to take a hard look at these realities, she says. But it's important to have these conversations respectfully. "I would say to her, look at the real policies of the NRA and who’s making money and why, and see if she really wants to be there," Steinem says. "I would just try to stress the facts in a way that I would want someone to stress them to me."

And Everytown For Gun Safety discovered that the majority of mass shootings — defined by four or more people being shot and killed — are connected to domestic or family violence.

"Men who are guilty of domestic violence are way more likely to own guns than men who are not," Steinem says. "These things are related."

"Men who are guilty of domestic violence are way more likely to own guns than men who are not."

"We have more guns per capita than any nation in the world by far. We have more violence," Steinem says. "The people most likely to be hurt by guns are the people in house where they are, not strangers."

Steinem tells Bustle that gender roles, which she says are intrinsically linked to gun violence and ownership, are just another way our society is designed to control women. "Toxic masculinity was invented to affect women," she says. "And though many men defy that concept, many are imprisoned by it."

It's this show of masculinity that Steinem is particularly concerned about. She tells Bustle there's one thing she wants women to know about guns: "Beware of men who need them."