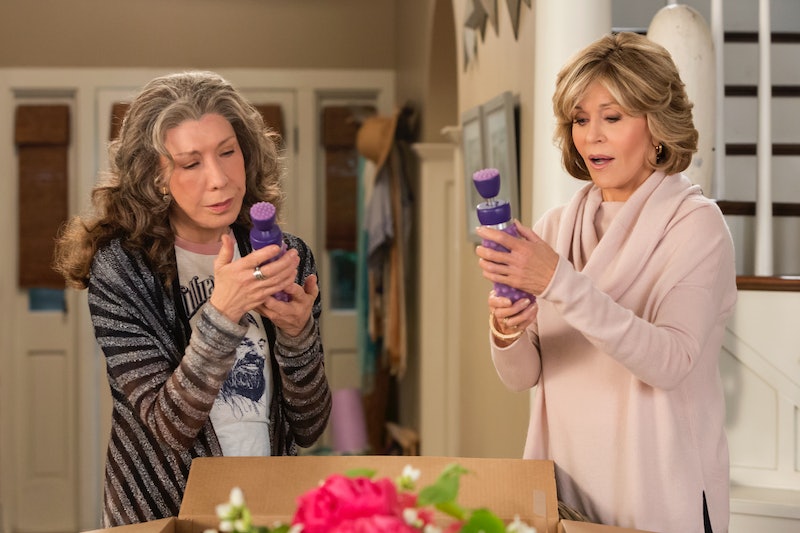 When I was about 20 years old, my grandmother gave me one of her very best pieces of advice. She said, "When you are young, there is nothing you do that you can't undo." Yes, I understand there are certain things that can never be undone, but the point is that, within reason, the choices you make in your young life about who to date, what to study, where to live, or where to work can all be changed. But, Grace and Frankie's third season shows that you don't have to be young to reinvent yourself. The new season, which hit Netflix March 24, features Grace and Frankie living full lives in their 70s, with room to reinvent themselves — no matter their age.

You are never too old to try something new, or reinvent yourself. And, while my grandmother may have focused her life advice on those who are young, it is not the way she lived. She always tried new things until she couldn't. My grandmother bought her first pair of blue jeans at age 80 and started taking spin classes at 82. (She couldn't keep up, and she couldn't have cared less.) In life, we never stop changing and making decisions, but this is rarely reflected on television — especially with older people.

The new Grace and Frankie adventures are doled out in digestible doses over the course of Season 3. (SPOILERS ahead.) In the first episode of the season, we see Grace and Frankie pursuing the idea we left them with in last season's cliffhanger. They are looking for a loan to start making vibrators for older women. They are embarking on a new business, turning over a new leaf, and depicting unfortunate ageism all at the same time. Grace is a seasoned businesswoman, who has realistic estimates about when the new business will turn profit, but the women can't get a 10-year loan because, as the loan officer says, it isn't "prudent," aka they may not live long enough to pay it off.

This kind of discrimination is rarely talked about on television. But, not only do Grace and Frankie, two older women, get the screen time to show you these obstacles, they'll make you laugh while doing it. From the get go, Grace and Frankie's third season shows so many new beginnings and firsts for its senior characters. In the first episode, Sol and Robert are buying a new home together, so they can really, finally properly start their lives together. Frankie's romance with Jacob (Ernie Hudson) is also heating up and he is spending more time at the beach house. The Season 3 premiere episode also shows another professional milestone for Frankie, her first art show.

The early episodes of the new season also show Sol and Robert thinking it could be time for retirement. In their new house and next chapter together, they realize that they don't necessarily need to be working. Robert immediately throws himself into retirement, while Sol continues to work a few days a week. Many people never want to retire and like to work and have a routine, so I'm glad the show features both sides. Robert is also looking to expand his social circle, beyond the conservative lawyers he has known for decades. And, in the third episode, he is excited to be cast as John Adams in a local production of 1776. So, even the more minor characters to the titular Grace and Frankie get to explore their options as they age.

And, as for the main two women, by episode three they are in business (with help from a secret investor) and the vibrators have arrived. The business is moving forward and there is definitely a market for their product. It's clear that these new life choices are working out for the characters, and, while there are obstacles along the way, it's a pretty inspiring message that the series sends.

While you can start new or undo something at any age, maybe my grandmother meant that it is easier when you are young. There are more obstacles and obligations as you age, but it doesn't mean that you can't start anew. Take a page from Grace, Frankie, or even my grandma's book, and remember you are never too old to make a change.

More like this
'Brookside' Is Coming Back & Soap Opera Fans Are Going Wild
By Sam Ramsden
The 'Teen Wolf' Creator Revealed If 'Wolf Pack' Takes Place In The Same Universe
By Grace Wehniainen
'Succession' Season 4 Will Be An "Absolute Banger" According To Cousin Greg
By Bustle Staff
The 'Gossip Girl' Reboot Creator Is “Looking For A New Home” To Air A Potential Season 3
By Brad Witter
Get Even More From Bustle — Sign Up For The Newsletter
From hair trends to relationship advice, our daily newsletter has everything you need to sound like a person who’s on TikTok, even if you aren’t.