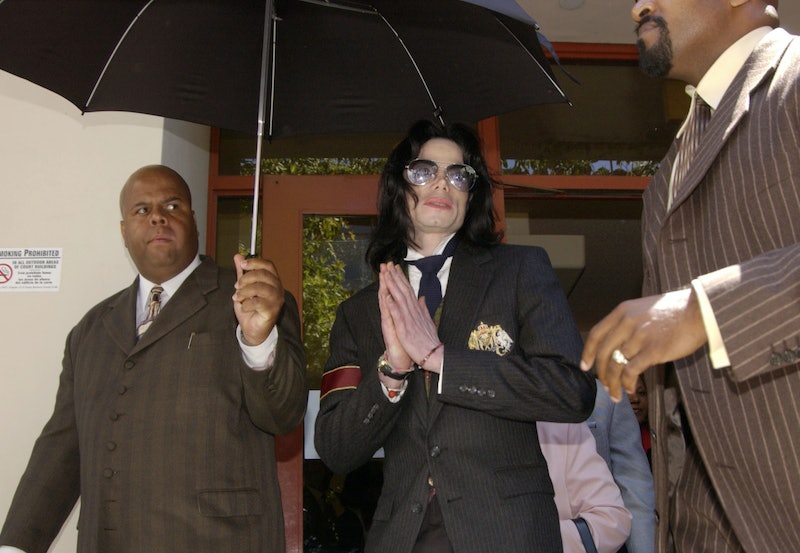 Fourteen years after Michael Jackson's molestation trial, Leaving Neverland is premiering on HBO, airing in two parts on Mar. 3 and 4. The documentary features interviews with accusers Wade Robson and James Safechuck and their families. Though Jackson was never charged for any crimes committed against either of them, he did go to court in a much-publicized case related to another accuser. Michael Jackson's 2005 molestation trial was international news, resulting in his acquittal of all charges, per ABC News.

According to Rolling Stone, Jackson was investigated by the Los Angeles Police Department in 1993 after his teenage friend Jordan Chandler and his family alleged that Jackson had abused him. He wasn't charged due to a lack of incriminating evidence. Later, the Chandlers sued Jackson and the singer settled with the family.

But more allegations surfaced in 2003 after the British ITV documentary, Living With Michael Jackson, aired in the U.S. The Guardian has described it as “the fuse that ignited the case and the trial.” On camera, Jackson told reporter Martin Bashir, "I have slept in a bed with many children.” Per Rolling Stone, 13-year-old Gavin Arvizo told authorities that he had been molested by Jackson, and that the singer attempted to keep the family hostage at Neverland — allegations that Jackson denied. Jackson was arrested and charged in late 2003. His criminal trial began on Feb. 28, 2005.

Per BBC News, Arvizo, who was 15 by the time the trial began, testified that Jackson’s sexually abusive behavior began after filming the documentary. He claimed that Jackson supplied him and his brother with wine, which the singer called “Jesus Juice,” and then molested them. Bashir also testified, though The Guardian reported at the time that he fidgeted on the stand and occasionally seem "perplexed" by the prosecution's questions.

But, as reported by BBC, the prosecution presented evidence that hurt the Arvizo family's perceived credibility, including details of a 2001 lawsuit against JC Penney's. Per CBS News, the family received a settlement from JC Penney's after alleging they were beaten up by J.C. Penney security guards. The Arvizo children reportedly had received acting lessons during that case. Arvizo’s mother Janet admitted that she had made false statements in that suit. ABC News also reported that Arvizo’s brother admitted he lied in the deposition for a lawsuit against J.C. Penney.

The BBC noted that in interviews with a social worker and a teacher after the airing of the documentary, Arvizo had denied being molested by Jackson, which was also presented at trial.

What also hurt the case against Jackson was that Macaulay Culkin, who also developed a friendship with the singer when he was a child, testified that he had never witnessed Jackson participate in sexually abusive behavior, per CNN. Culkin said he always slept fully clothed with Jackson, and that the late pop star had an “open door policy.” “"I've never seen him do anything improper with anybody," the actor said during the trial. Robson also testified during the trial in support of Jackson, which he discusses in the documentary. ABC News reported that Jackson himself did not take the stand, though the court was shown taped interviews with him where he claimed that he would never hurt children and that he was "a completely innocent guy."

With a lack of proper evidence according to the jury, in June of 2005, Jackson was acquitted of all charges of molestation, attempted molestation, plying minors with liquor, and conspiracy, per the aforementioned ABC News report. The jury deliberated for little more than a day.

This January, weeks before the Leaving Neverland premiere, Michael Jackson's estate issued a statement, per IndieWire. It reads:

In response, HBO released the following statement to The Hollywood Reporter:

"Our plans remain unchanged. The two-part documentary, Leaving Neverland will air as scheduled on Sunday, Mar. 3 and Monday, Mar. 4. Dan Reed is an award-winning filmmaker who has carefully documented these survivors' accounts. People should reserve judgment until they see the film."

Jackson was tried and acquitted on these charges, but Leaving Neverland goes into detail regarding other allegations, continuing the conversation about Jackson's behavior and legacy.