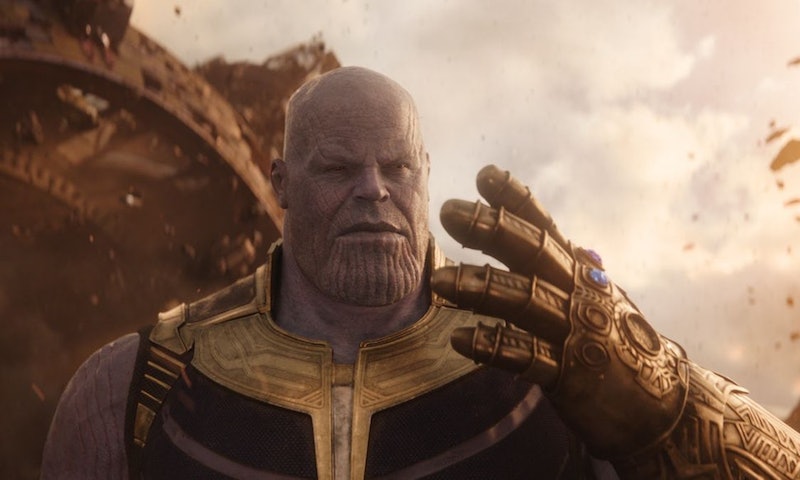 Spoilers ahead for Avengers: Infinity War. We've made it. After so much nerve-wracking anticipation, the first of the last two Avengers movies (well, for now) has arrived, and millions of fans are rushing to the theater to see what happens. There were a lot of theories heading into this one involving Thanos' wrath, time travel, and the deaths of many beloved characters, and now that the movie is actually here, we know the truth. But seeing as Avengers: Infinity War is the biggest Marvel mash-up ever, you won't be alone if the conclusion of the film leaves you with more questions than answers. If that's the case, don't worry, because here's a breakdown of what happened at the end of Infinity War.

So, as we all know, the basic gist of Infinity War is that Big Bad Thanos is on a mission to collect all six Infinity Stones, which, when put together in his gauntlet (basically a big shiny glove), make him the most powerful being in the universe by far. He wants to use this power to destroy half the people who exist, in order to "restore balance" to the universe. All throughout Infinity War, Thanos works to collect each stone, killing whoever gets in his way and causing major mayhem on the journey.

The end of the movie really starts when Thanos collects the Time Stone from Doctor Strange, who'd been protecting it. Thanos then heads off to Earth in search of the last stone he needs - the Mind Stone, which is unfortunately planted right inside Vision's forehead. The villain lands in Wakanda alongside his minions and starts battling a massive group of Wakandan soldiers and the Avengers. Meanwhile, Shuri rushes to get the Mind Stone out of Vision's forehead so the hero's life can be saved.

During the battle, the Avengers and the Wakandan soldiers try their hardest to defeat Thanos and the other villains, using all their strength and powers. They manage to kill Thanos' henchmen, but they sadly can't defeat the supervillain himself. Knowing that he's coming close, Scarlet Witch basically kills Vision in order to spare him from Thanos. Unfortunately, Thanos brings Vision back using the Time Stone, and kills him again in order to get the Mind Stone out of his head. Thor then comes into the picture, injuring Thanos badly — but sadly, it doesn't stop Thanos from activating the now-full Infinity Gauntlet to kill half the population of the universe, juts like he'd always planned.

While Thanos teleports away to a planet where he chats with a young Gamora, who asks him if it was "worth it," the Avengers deal with the effects of the villain's action. One by one, half the heroes start dying, disintegrating into dust. Peter Parker, Doctor Strange, T'Challa, Scarlet Witch, Bucky, Peter Quill, Drax, Groot, Mantis, Falcon — they all disappear, and it's truly heartbreaking to see. Everyone who's left is shell-shocked, not sure what to do next.

And in the movie's post-credits scene, we see S.H.I.E.L.D. agents Nick Fury and Maria Hill in New York, witnessing people around them disappearing. Right before he himself disintegrates, Fury manages to send a distress signal on a pager to a person Marvel fans will quickly identify as Captain Marvel. It's up to her, with her time-travel abilities, to hopefully save the day in Avengers 4 and bring all those dead heroes back to life.

So, yeah — a lot happens at the end of Infinity War, and it's hard to believe that we have to wait a whole year to find out the fates of all these beloved characters. Thanks, Marvel.