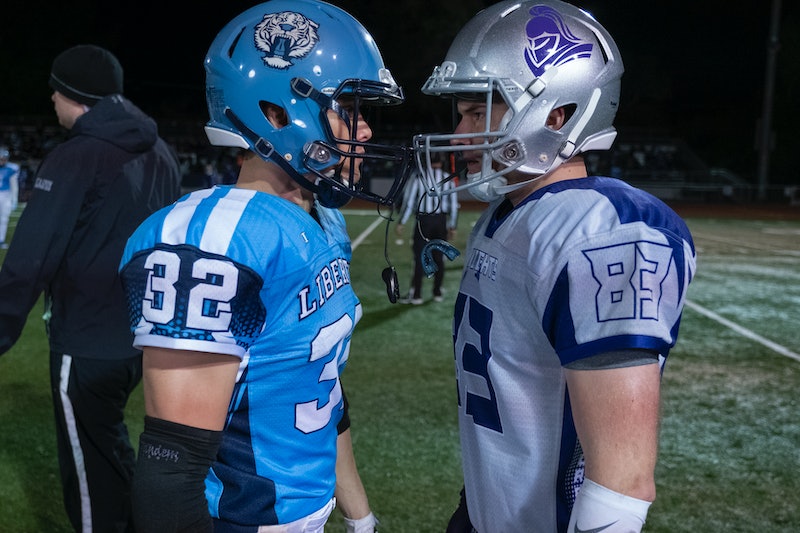 Spoilers ahead for 13 Reasons Why Season 3. In order to understand who killed Bryce Walker and why, you first need to know what happened at the homecoming game on 13 Reasons Why. It marked a turning point for many of the show's characters — but particularly Bryce, since it was the night he died. In fact, for most of the season, the events of the game are just as big a mystery as who the murderer is.

Up until the second to last episode, all we know is that whatever happened at the homecoming game, it was big enough that people are still talking about it. We also know that there was some kind of fight involved, as many of Liberty High's students are healing from bruises. But we don't know who the fight was between, how it started, or exactly how many people were involved. In Episode 12, the truth is finally revealed.

The homecoming game was a big deal because it meant Bryce would be back on the field with his former Liberty High teammates for the first time since he transferred to Hillcrest, although he was playing against them, not with them. Considering everyone knew he was guilty of rape, he didn't exactly get a warm welcome back, but that ended up being the least of his concerns that night.

As soon as Bryce arrived at the game with the rest of the Hillcrest team, everything was put into motion. He found Jessica in the parking lot and asked her to meet him at Navy Pier later that night because he wanted to give her something. Then, he went to the locker room and confronted Monty about assaulting Tyler, threatening that if he didn't leave Tyler alone, he'd expose him for trying to kill Clay and giving Alex a gun. Afterward, Bryce ran into Chloe, who told him that she had been pregnant with his child but had an abortion, and that Zach had supported her. Clay also saw Ani kiss Bryce, which he angrily confronted her about.

After the game started, Jessica and her sexual assault survivors group rushed the field to protest Bryce and the rape culture perpetuated by Liberty's athletes. However, after one Hillcrest player groped Jessica, the Liberty players ran into the field and a full-on brawl broke out. With punches flying left and right, Bryce — angry about the situation with Chloe — tackled Zach and injured his leg.

This led Zach to find Bryce at Navy Pier, where he was waiting for Jessica after the game, and beat him up. When he left, Bryce was unable to move but still conscious. However, considering the press published reports that Bryce's cause of death was blunt force trauma, Zach falsely believed he was the one who murdered Bryce and eventually went to the station to confess. In actuality, the real killer arrived later on that night.

Knowing Bryce's past and how on edge everyone at Liberty had been, it was inevitable that his return to the school wouldn't go smoothly, but no one could have predicted he'd end up dead. With his case now closed, it will be interesting to see what new mysteries arise in Season 4.