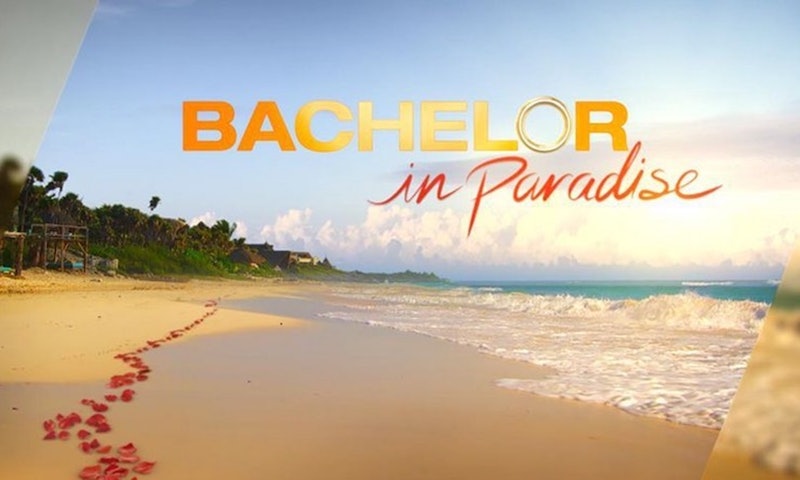 If you're following the story as details continue to emerge, then you should sit down before reading these updates about what happened between DeMario and Corinne on Bachelor in Paradise. The unconfirmed rumors suggest that the show has suspended filming for some profoundly disturbing reasons. Bustle has reached out to ABC, Olympios, and Jackson for comment, but did not receive an immediate response. Warner Bros. reiterated their original statement that “We have become aware of allegations of misconduct on the set of 'Bachelor in Paradise' in Mexico. We have suspended production and we are conducting a thorough investigation of these allegations. Once the investigation is complete, we will take appropriate responsive action.”

Update: On Monday, TMZ reported that sources close to the female contestant have been told that she was reportedly "in a blackout state" during the alleged incident and "remembers nothing." In addition, the sources also claim that she "doesn't fully blame DeMario because he too was drunk." A statement directly from the contestant herself has yet to be given.

Update #2: In a video posted by TMZ, Jackson says "no comment" in response to numerous questions about the alleged incident. Asked if he's upset about reports alleging that Olympios claims she did not give consent, Jackson responded, ""No, no. I'm all good."

Earlier: According to People Magazine, the series stopped filming following a source's claim that DeMario Jackson, who was reportedly intoxicated, had a sexual encounter with a female contestant who was reportedly too drunk to be able to consent. TMZ's source claims that the female contestant was Corinne Olympios, and that filming was stopped after...

"... a field producer filed a complaint that Corinne Olympios seemed so drunk the first day of filming she had no ability to consent to DeMario Jackson's sexual moves in a swimming pool, and producers nonetheless let it play out on film."

According to TMZ, the field producer who reportedly filed a complaint about misconduct alleges that because Olympios was not sober enough to give consent, the alleged incident was sexual assault.

Producers allegedly informed Jackson and Olympios on Sunday, June 11 that “one of the story lines would be the 2 of them hooking up,” TMZ reported. After they met at the bar and drank a lot together, sources who claim to have spoken to Jackson reported that Olympios “jumped into his lap and started making out with him,” which was the point at which he reportedly suggested that they move to the pool. The cameras were allegedly still rolling when this happened. There, the pair allegedly began hooking up, which TMZ's sources describe in graphic terms. However, no penetrative sex was had, according to TMZ's sources.

TMZ's sources also claim that those who have seen the footage reported that Olympios seemed "fully engaged." Despite this, on Tuesday, June 6, the pair were allegedly called in to speak to an executive producer and was told that one of the show producers had reportedly seen the footage and was “uncomfortable” with the shot, according to TMZ.

One contestant on the show allegedly told People that this was witnessed by two further cast members. The same source claimed “that the contestants are upset that crew members did not do more to stop the incident.” They told People:

“People are pissed, and not just at DeMario. We’re pissed that this whole thing happened… They could have seen that she was drinking too much and that he was taking advantage. They could have stopped this before it got this far. But they decided to let it go, and let it happen, and see what happened? So, I’m angry at the show, and everyone else is too.”

“The show absolutely values the primacy of consent, and this instance it appears as though conduct allegedly occurred without the proper consent having been given."

Obviously, at this stage, none of the details above have been officially confirmed. But if the allegations are true, the entire situation sounds completely unacceptable.