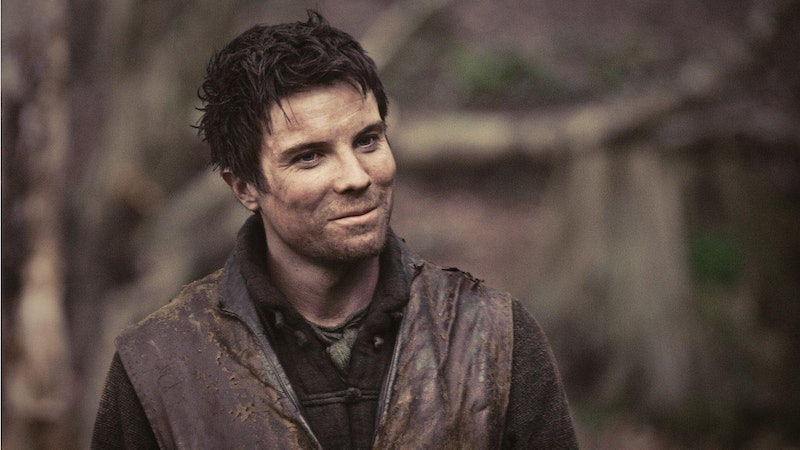 This entire season of Game Of Thrones, fans have watched and waited with baited breath for the day that the hottest Baratheon bastard would return from his three-season long boat ride off the coast of Dragonstone. Now, as of the latest episode, "Eastwatch," Gendry has finally, officially returned to Game Of Thrones, and it's honestly like he never left.

In case you need a refresher: Gendry appeared in the very first season as the lowborn bastard son of former King Robert Baratheon, working as a Blacksmith's apprentice in King's Landing. When Ned Stark saw his dark hair for the first time, it led him to believe that Joffrey and Robert's other legitimate children by Cersei were actually products of incest, which pretty much led to his death a few episodes later.

From there, Gendry fled the city in Season 2 to join the Night's Watch and struck up a friendship with Arya Stark, who was pretending to be a boy at the time so as not to be recognized as a Stark. Gendry immediately saw right through her disguise, and she entrusted her with the secret of her identity. When they were captured by Lannister army and sent to Harrenhaal, the two escaped together (along with Hotpie) and remained thick as thieves until Gendry was lured away by Melisandre with the promise of learning more about his Baratheon heritage.

Gendry and Arya became so close, in fact, that 'shipping the two of them is still an immensely popular past time among Game of Thrones fans. And why wouldn't it be? The last time the two saw each other was when Gendry left for Dragonstone with Melisandre, and Arya begged him not to go by saying "I can be your family." According to an interview actor Maisie Williams gave to Rolling Stone, there was always meant to be love in her voice:

At first I read it as "You can come to Winterfell, I'll show you how everything goes, and you can come and sit at the table with us." I thought it would be a bit like Theon. But when I was doing the scene, [director] Alex Graves said "When you say that last line, 'I can be your family,' say it like 'I love you.'" And that's the take that they used.

Of course, things went badly for Gendry at Dragonstone — Melisandre might be hot, but bloodletting via leeches sure isn't — and he hadn't been seen since. But as the fifth episode of Season 7 revealed, he hasn't been rowing this whole time; he went back to King's Landing to be a Blacksmith again, with a shorter haircut and a fancy new warhammer (He's pretty good at wielding it, too, although he can't hold a candle to Arya's sword-dancing skills).

Now, thanks to a chance meeting with Davos Seaworth, he's made a new friend in Jon Snow and is on his way to help capture a white walker at Eastwatch. If he survives the encounter, my guess is that he'll make his way to Winterfell eventually (especially if he and Jon continue to relive Ned and Robert Baratheon's past bro-ship), which should lead him straight to Arya.

But now that she's been through so much in Braavos and become a master assassin, what will the reunion be like? Will he still be deferential to her and call her "lady," or will his attempt to claim his Baratheon heritage put him on equal footing with her? No matter what, it's sure to be an entertaining reunion — after all, Game of Thrones is all about that this season.