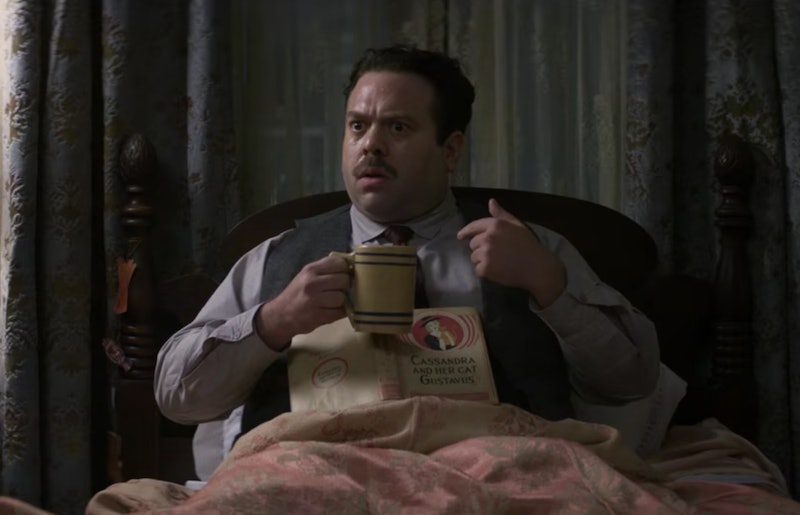 On Nov. 16, Fantastic Beasts: The Crimes of Grindelwald comes to theaters and muggles will again be transported into author J.K. Rowling's Wizarding World. The new film will pick up a year after Fantastic Beasts and Where To Find Them left off, which means that you might want to brush up on what happened in the first Fantastic Beasts movie before you see this one. Seeing as Rowling plans to write five movies in the spin-off series, per Business Insider, you'll also want to get extra familiar with the 1920s fantasy world in which Fantastic Beasts is set.

At the beginning of the first film in the series, audiences meet Newt Scamander (Eddie Redmayne) as he travels by ship to New York City in 1926. Newt is a magizoologist, which, you guessed it, describes a person who studies magical animals. As soon as Newt steps onto the streets, it seems evident that something's off as a crowd inspects an inexplicably demolished building. Newt ends up standing in a crowd with a group of people listening to Mary Lou Barebone (Samantha Morton) standing on the steps of a bank and bellowing to the crowd about the evilness of witches and wizards, advertising her group the New Salem Philanthropic Society, which aims to eradicate people who have magical powers.

Suddenly, a magical creature called a Niffler escapes from Newt's briefcase, sending the wizard on a frantic chase in search of the runaway beast.

Nifflers' magical abilities happen to be finding treasure, so the animal naturally scurries into the bank to collect all the gold coins it can get its tiny hands on. Seeing the disturbance, a witch named Tina Goldstein (Katherine Waterston) follows Newt into the bank, where a muggle, a.k.a. a "No-Maj" as they're called in the U.S., Jacob Kowalski (Dan Fogler) has also gone to to ask for a loan. Jacob, an aspiring baker, ends up not getting the loan, but he finds the Niffler, which Newt then captures and returns to the suitcase. When parting ways, Jacob and Newt swap suitcases, and then Tina arrests Newt for using magic in public, bringing him to the Magical Congress of the United States of America (MACUSA) headquarters.

See, Tina had formerly worked for MACUSA as an auror, whose job is to combat wizards using dark magic. When returning to her office, Tina sees her former boss, Percival Graves (Colin Farrell), and Seraphina Picquery (Carmen Ejogo), the President of MACUSA. Before they can arrest Newt, he realizes that he has the wrong suitcase, so the wizard and Tina go off to find Jacob and the rest of the magical creatures.

Tina brings Newt and Jacob to her home, where the No-Maj and wizard meet Tina's telepathic sister, Queenie (Alison Sudol), who instantly has a romantic connection with Jacob — though it's illegal in the U.S. for wizards and No-Majes to be in relationships together. While at Tina's house, Newt shows Jacob the zoo inside his suitcase, which includes a contained Obscura. Newt explains that this is a parasite that young wizards or witches can develop if they conceal their magical powers.

In a different storyline, Mary Lou acts abusively towards her three adopted kids, Chastity (Jenn Murray), Modesty (Faith Wood-Blagrove), and Credence (Ezra Miller). Later, we see Credence talking with Percival in a mysterious meeting at which Percival promises to free Credence from Mary Lou's abusive household if the boy can find an Obscura, which Percival believes demolished the building presented in the beginning of the film.

After regrouping at Tina's boarding house, the former auror turns Newt into MACUSA, where Percival accuses Newt of working for the famous dark wizard, Gellert Grindelwald and causing the death of the No-Maj Senator Henry Shaw, Jr. After Tina and Newt are arrested and sentenced to death, Queenie and Jacob break them out and the group completes their mission to find the remaining creatures. Newt had thought that he could continue with his trip to Arizona after that, but then more strange events commence in the Barebone home.

Mary Lou finds a wand and goes to whip Modesty, assuming it's hers. Just then, a wild Obscura appears, seemingly from Modesty, which kills Mary Lou and Chastity. Then, Percival appears and tells Credence that he wants to find Modesty who he thinks is the real witch. Percival reveals that he had lied to Credence about helping him, saying that Credence is a squib and not a magical wizard. Then, Credence turns into the Obscura, and Tina follows the destruction to find him in a subway tunnel.

In the tunnel, Tina and Credence are joined by Percival, Newt, President Picquery, and a group of Aurors. In a shocking twist it's then revealed that Percival had actually been Grindelwald (Johnny Depp), and the Aurors capture him. Before he returns to England, Newt releases a potion all over the city that erases all muggles' memories. He also leaves enough magical egg shells for Jacob to sell in order to afford his dream of opening a bakery — which is filled with pastries baked in the shapes of Newt's magical creatures, so perhaps he remembers more than the audience originally assumes.

With Grindelwald unleashed, the second Fantastic Beasts will build on the existing extension to the Harry Potter universe — there are many more secrets to be revealed.