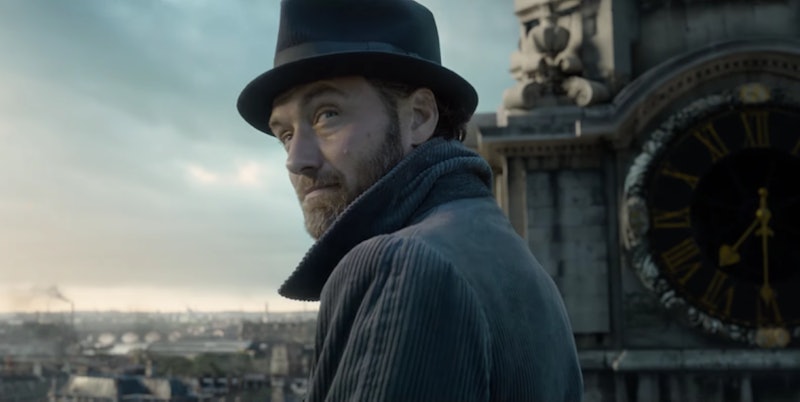 For those Harry Potter fans who are a little nervous to see a young Albus Dumbledore in Fantastic Beasts: The Crimes Of Grindelwald, maybe Luna Lovegood can help quell those fears. See, the actor who played Luna, Evanna Lynch is excited to see Jude Law as Dumbledore, in fact, she told Entertainment Tonight that he's the "Dumbledore we've been waiting for." And luckily, fans won't have to wait too much longer to see if Lynch is right.

In an interview with ET, Lynch talked about how excited she was for the Fantastic Beasts sequel, which she had already seen with the Crimes Of Grindelwald cast. "I'm obsessed with it!" Lynch said of the film hitting theaters Nov. 16. "It just makes the magical world so much larger and so much more detailed. The actual magic in this movie, it's just beyond anything I've seen in other movies."

Lynch, who is currently competing on Dancing With the Stars, also had good things to say about Law's take on Dumbledore, who may be young, but is still the powerful wizard Potter fans remember. And in Lynch's opinion is an "incredible" choice to fill the robe that was previously worn by the late Richard Harris and later Michael Gambon.

"He really gets [the character's] inner [thoughts] and his wisdom and his sincerity, like how Dumbledore is a conflicted, imperfect man," Lynch told ET of Law.

It was something Lynch echoed in a Instagram she posted just days early when she sat down to interview Law, Katherine Waterston (Tina Goldstein), and Eddie Redmayne, who plays Newt Scamander. In the caption she gushed over "their deeply insightful, thoughtful answers on Dumbledore, Tina and Newt’s characters."

After talking about how "gratifying" it is as a Harry Potter fan to see the actors take such care with their characters she had a special shout-out for Law. "And CAN I JUST SAY," she wrote, "Jude Law is the Dumbledore we have been waiting for oh my goodness, his understanding and appreciation of Dumbles’ past struggles and his inner conflict blew my cotton socks off." So, maybe bring an extra pair to the theater, just incase.

Back in July, Law talked about playing Dumbledore with Entertainment Weekly, revealing author J.K. Rowling was a big help. "She gave me a very good sense of Albus’ life journey and who he was and what was happening in his head and his heart and his world for this particular story," he said.

This time around Dumbledore is trying to stop Gellert Grindelwald (Johnny Depp), who he has a strained past with, which allows Law to veer away from the previous portrayals of the character. "He has a youthful mercurial approach to life," Law said, "but that there’s something that hangs heavy in his heart, in his past, that underlies all of that. There’s a root of good humor and good heart and sense of self and a sense of past."

Lynch agreed that there is pressure that comes with taking on the role of Dumbledore. "It's a beloved character, you know?" Lynch told ET. "I think people write him off like, 'Oh, he's a Gandalf type. He's all knowing all wise and nothing ever goes wrong.' But no, actually. He's very troubled, and you see more of that in this movie," adding, "Jude Law is aces."

Now that fans have Lynch's review, they'll have to decide for themselves if they agree that Law's brooding take on Dumbledore is what Harry Potter fans have been waiting for.

More like this
Everything To Know About 'The Hunger Games' Prequel Movie
By Grace Wehniainen and Radhika Menon
I've Read The Harry Potter Books 30+ Times & This Plot Hole Haunts Me
By Kelsey Stiegman
Everything To Know About 'Evil' Season 4
By Meguire Hennes
Why Did Meatball Leave 'The Bachelorette'? His Second Chance Didn’t Last Too Long
By Grace Wehniainen
Get Even More From Bustle — Sign Up For The Newsletter