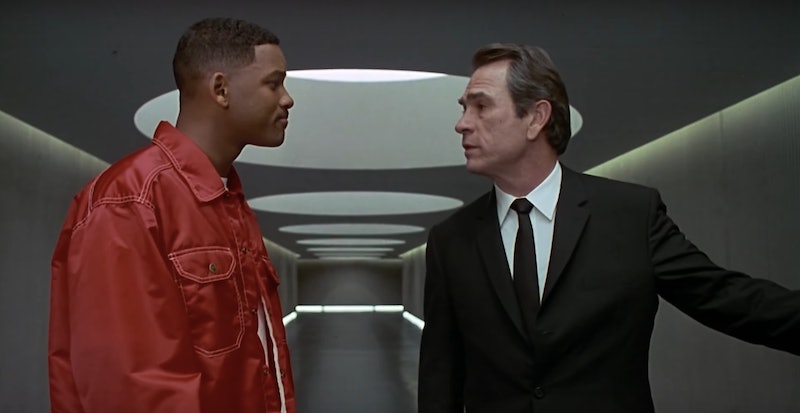 The new Men in Black movie is different from the original three in a few ways — it's set in a number of different countries, and one of the Men in Black in a Woman in Black, for starters — but the biggest change is that the two original stars are gone. Agents J and K are not in are not in Men in Black: International, so what happened to Will Smith and Tommy Lee Jones's characters? Are they no longer in black?

We'll get to the off-screen stuff later, but in the movie the whereabouts and whatabouts of Agent J (Smith) and Agent K (Jones) are not mentioned. MIB: International is very much the story of Agent M (Tessa Thompson) and Agent H (Chris Hemsworth) and that's where the focus stays. The movie is almost a reboot, but technically it's still a sequel because it exists in the same world as the other three movies and has one overlapping main character: Agent O, the head of the MIB (Emma Thompson).

Agent O being in both Men in Black 3 and Men in Black: International lets viewers know that this is the same Men in Black organization where Agents J and K worked — she personally knew both of them. But, on top of that, there's another reference to J and K. At the Men in Black office there are paintings on the wall of notable agents and one features J and K battling an alien.

To be clear, this is the only reference to those two in the new film. M and H aren't walking around talking about their heroes J and K. No one is related to J and K. (That we know of. A sequel could change things.) Agent O doesn't talk about M and H reminding her of two other guys she used to know. J and K have just... disappeared. Maybe they retired. Maybe they moved into the private sector. We don't know.

The third movie didn't provide any answers to that, either. MIB3 ends after a time travel expedition, in which J finds out that K met him as a child after J's father died and that his father was killed by an alien right in front of K. K neuralyzes child J of that particular moment, and continues to be someone who watches over him. With K safe, J is able to go back to the future and reunite with K.

Now, that's just what goes on within the movie. There's also the real world logistics of how J and K got left behind. During the MIB: International premiere, producer Laurie MacDonald told Variety (via Digital Spy) that the filmmakers felt the story arc for J and K was complete. "When we finished the third, we did all talk about the fact that we that we didn't feel there was another film," she explained. "We all talked about it feeling very complete, that somehow because the third dealt with the mystery of Will's father — it felt emotionally complete."

There had been talk of a fourth movie ever since the third one came out, and it went through changes in writers and dodged the very odd idea that it was going to become a shared universe with the 21 Jump Street movies. Instead, things went in a different direction and International came about instead with brand new stars.

But while the duo at the heart of the film is different, a lot of the aspects of the story are the same. The Men in Black organization is still operating the same way, and the new agents are still battling some aliens and having diplomatic talks with others. And, hey, since J and K do exist in this world, maybe they'll pop up in a sequel. After all, the original plan was for this thing to be a trilogy.

More like this
What's New On Netflix: A Third '365 Days' Movie & Lili Reinhart’s New Film
By Arya Roshanian
Everything To Know About 'The Hunger Games' Prequel Movie
By Grace Wehniainen and Radhika Menon
Twitter Is At Odds Over Taylor Swift’s Possible ‘All Too Well’ Oscar Run
By Brad Witter
Revisit 1992’s 'A League Of Their Own Cast' Photos After The New TV Series
By Grace Wehniainen
Get Even More From Bustle — Sign Up For The Newsletter