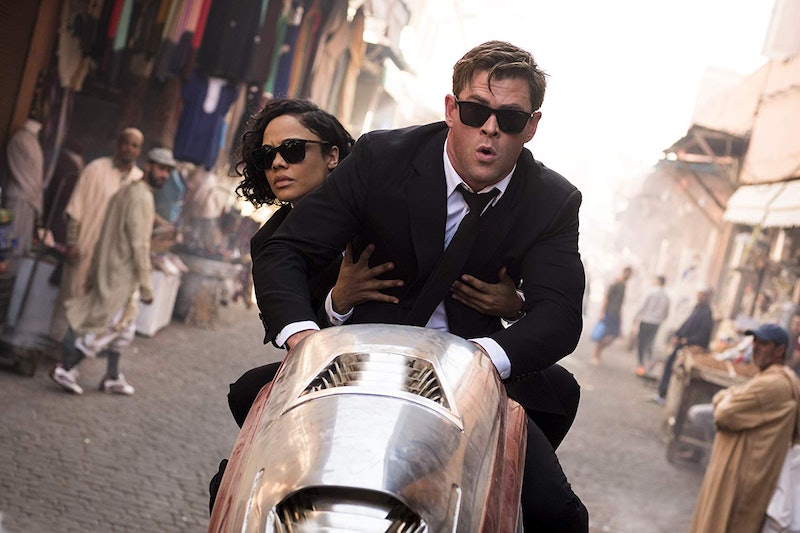 It's been a good seven years since the last Men in Black movie, Men in Black 3, was released. Now, Columbia Pictures brings the dapperly suited agents back to the big screen with Men in Black: International, which premieres in theaters on June 14. And this time around, a female agent takes one of the lead roles. Tessa Thompson plays Agent M, with Chris Hemsworth's Agent H as her partner in busting alien crime. With this promising dynamic duo headlining the latest film in the MIB franchise, it's not that surprising that a Men in Black: International sequel is already in the works.

While the first three movies starred Will Smith and Tommy Lee Jones, the fourth installment in the MIB series focuses on Agent M (Thompson), who discovers the organization after 20 years of searching. She gets assigned by Agent O (Emma Thompson) to the London branch and ends up partnering with rising star Agent H (Hemsworth). Their mission is to face the greatest threat the Men in Black have yet to encounter: a mole within their own agency.

No reports have suggested that a sequel to the film is coming any time soon. But Variety projects that the movie is heading for a $40 million launch in North America on the June 14-16 weekend. And if all goes well, we may just get another MIB: International film. That isn't a guarantee, but with two Marvel Cinematic Universe standouts stepping into a known franchise, the 2019 film definitely has the potential to be a financial success.

Straight Outta Compton helmer F. Gary Gray takes over for MIB 1-3 director Barry Sonnenfeld for this one, working off a script written by Matt Holloway and Art Marcum, who are the writers behind 2008’s Marvel Cinematic Universe-launching Iron Man. So, who knows? Maybe this film will truly revive this franchise and lead to more.

But whether or not another MIB film happens, it seems unlikely that the movie franchise's legacy will ever totally die out. Aside from the film sequels, the 1997 original also spawned an animated television series spinoff, a video game, and a theme park ride in Universal Studios in Orlando — plus, of course, the song.

We'll find out soon enough if the pair and the movie are brilliant enough for the public to beg for a Men in Black: International sequel.