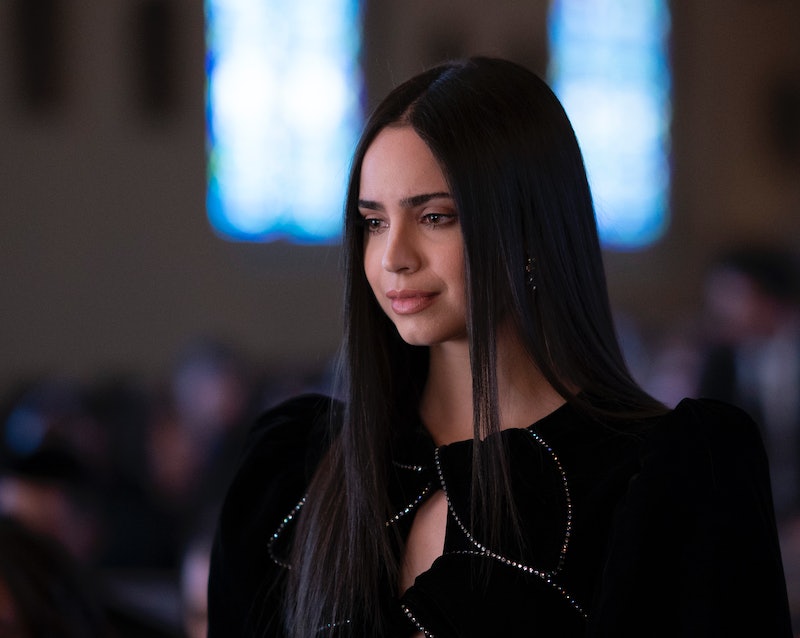 The first episode of The Perfectionists may have left off with the cliffhanger of who killed Nolan, but there are many smaller mysteries on the series as well. One of them is what exactly is going on with Ava Jalali's parents on The Perfectionists. The premiere teased that the Jalali family has some secrets that Ava is trying to overcome, but she could get caught up in things before long.

In the pilot, Ava told Alison that her father embezzled millions of dollars from his clients (of what kind of business is still unclear) and then went on the run. But Ava seemed to have more animosity towards her mother who chose to follow her dad. "My dad had to run. My mom, she chose to bail," Ava told Ali. A flashback showed that the FBI questioned Ava about her parents' whereabouts, but she lied and said her family left her with nothing.

Minutes later, however, she pulled out a bag of cash from a hiding spot. "I'm sorry" a note from her dad said inside the money bag. So they didn't skip out and leave Ava totally high and dry. Still, she will certainly have extra eyes on her as police investigate Nolan's murder since she was dating him and also her family has a history of problems with the law. The FBI agent seemed suspicious that Ava didn't know where her family was and that they could have left her penniless. So if her cash bag secret is unveiled, the FBI could add her back to their suspects list as someone involved or at least aware of her father's embezzlement.

In the meantime, though, Ava's doing everything she can to separate herself from what her father did. When Nolan suggested that she outsource some of her business, she shot his idea down right away. "I'm not outsourcing my brand, OK? This is all on me," she told him. "When people hear the name Jalali, I need them to think of me — not my dad."

Sofia Carson, who plays Ava, said in a promo video on the ABC press site that Ava is putting a lot of pressure on herself to rebrand the Jalali name and rehabilitate her family's image. "She is this incredible young woman who is just relentless. Despite losing everything and everyone, she is incapable of giving up. She is here to prove to herself and to the world that she will do and be everything that her parents were not," Carson said.

But even as hard as she's working, viewers can see the cracks building as Ava pushes herself perhaps too far. "She’s lived a very hard and lonely life, and she has had to build herself from nothing — her parents abandoned her," Carson told Bustle. "That in and of itself already is a lot to carry on your shoulders and then in the pilot, as you saw, she loses her love. She really has no one."

Showrunner I. Marlene King said that losing Nolan will really impact Ava's already fragile world. "Ava has really developed this hard shell around her, because she has been abandoned by her family, and now she’s got to deal with Nolan’s cheating on her, then the loss of Nolan which is all very complicated," King told Us Weekly. She added that viewers will get to know more of Ava's backstory soon. "She brings a lot of depth to [the show]. Her character really is like an onion that we’re going to peel back the layers from, little, by little, by little until we really get to know her more," King said.

It's not known whether Ava has any involvement in Nolan's death, but she may know more about her parents than she's letting on — especially since she lied about her dad leaving her money. Hopefully she doesn't get caught up in his mess while she's trying to strike out on her own.

More like this
Paul Mescal, Man Of Mystery
By Samantha Leach and Heather Hazzan
Mike Flanagan Teases 'The Midnight Club' In This Exclusive, Creepy Clip
By Grace Wehniainen
'Grey's Anatomy's New Intern Got Advice From Dr. Bailey Herself
By Grace Wehniainen
Glenda Cleveland Died 2 Decades After Trying To Turn In Neighbor Jeffery Dahmer
By Brad Witter
Get Even More From Bustle — Sign Up For The Newsletter