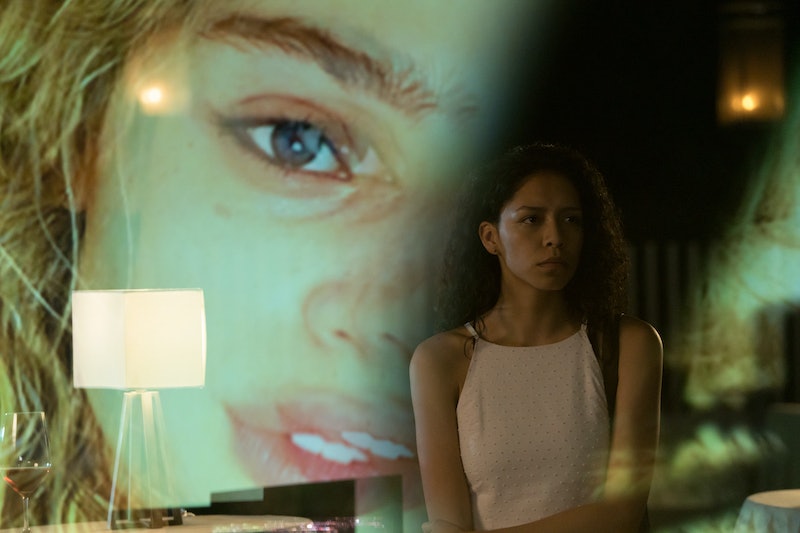 Spoilers ahead for Chambers Season 1. For Sasha Yazzie on Netflix's Chambers, a near-death experience is only the beginning of a horrifying and haunting tale. After a local teen named Becky dies, The miraculous heart transplant she receives at the start of the season soon throws her deep into a creepy, twist-filled mystery. And though how Becky died on Chambers is revealed pretty early on in the show, what really happened is a lot more complicated.

Initially, Sasha is told that Becky died in a freak accident: she was electrocuted in the shower after her radio fell into the water. However, after Sasha starts having visions of Becky and begins seeing her memories, she starts to believe that there's more to the story. Sasha first suspects that Becky was murdered by her brother, a recovering drug addict, and that the family covered it all up. Then, it's revealed that Becky intentionally dropped the radio into the shower after taking drugs, and committed suicide. But again, there's a lot more to it then that.

In Episode 8, Sasha is kidnapped by her high school counselor, Jones, who explains "we chose Becky and that "the universe chose you." Who is we? Was Jones in some kind of cult? He says he wants to communicate with something "divine" inside of Sasha, but Becky takes control of her body and pushes him off of a cliff before he can say much more.

Later, Sasha (and Becky; they're pretty much the same person at this point) try to explain what happened to Mrs. Lefevre. Becky's mom thinks Jones raped her daughter, but speaking through Sasha, Becky tells her that Jones summoned an evil spirit and put it inside her. After Becky's spirit leaves Sasha, and then returns at Mrs. Lefevre's insistence, she fills in some more details. Whatever Jones was doing, he was wearing a mask while doing it. Definitely seems like a cult. They had robes, weird symbols on their chests, the whole shebang.

"The Annex," Becky's mom concludes. What may have seemed like an innocent "spiritual wellness center" has a dark secret. Once Becky found out what Jones and the others had done to her, she ended her life to get whatever evil was inside of her out. Unfortunately, when her heart was transplanted into Sasha's body, both Becky and whatever was in her came too.

But wait! There's more! It wasn't just The Annex Foundation... it was Becky's own father. He was the one who summoned the spirit. Those tribal masks and Native American art he kept around the house were major foreshadowing. Becky's dad claims he wasn't trying to hurt her, but rather, he allowed his daughter to be "chosen" for this dangerous ritual because he thought she was special.

Is what happened to Becky the reason she's able to live on through her heart in Sasha's body? Was Sasha chosen as a conduit, or was it really a coincidence? Becky tells Sasha that she has to die, or risk that darkness hurting others. Sasha seems to get rid of Becky's spirit once and for all, but based on the final scene, that darkness is still definitely inside of her. She has to have some kind of powers to be able to knock out half of The Annex.

By the time the credits roll, there's still a lot left to be answered on Chambers. Hopefully, the show will return for a second season and start making sense of all the madness.