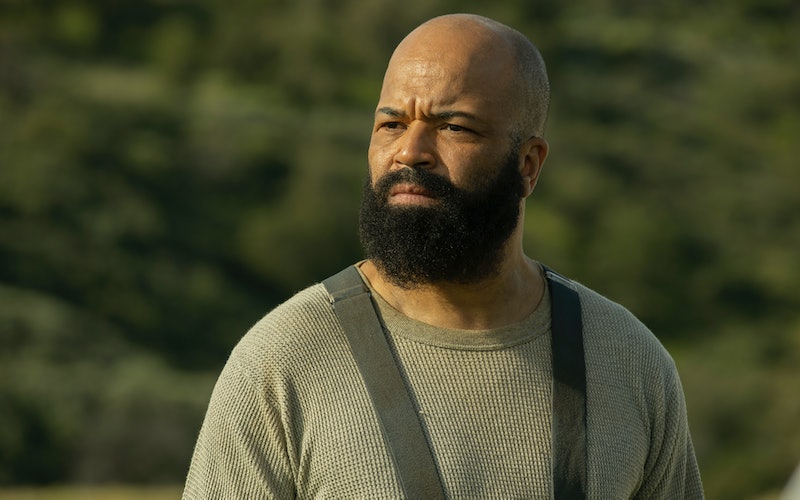 With a show as confounding as HBO's Westworld, it's difficult to keep up with what's happening in real time — let alone remember two years after it aired. So before Season 3 premieres on Sunday, you're going to want a refresher on what happened to Bernard in Westworld Season 2. Once again, it looks like he'll be a key player in the story.

When we first see Bernard (Jeffrey Wright) in Season 2, he's waking up on a beach surrounded by hosts' dead bodies. We later learn this scene is set two weeks into the future from the other events unfolding.

In the present timeline, Bernard finds a still-alive Elsie (Shannon Woodward) — who was assumed dead after Ford ordered Bernard to attack her in Season 1 — living in a cave. Together, they discover a simulation called the Cradle, where all of the hosts' backup consciousnesses are held. Bernard plugs himself into this simulation and encounters his late creator, Ford, who instructs him to visit the Forge (essentially the same thing as the Cradle, but for the guests' minds). There, Bernard runs into Dolores and learns about the Valley Beyond (aka the Sublime), which is kind of like heaven for the hosts' consciousnesses.

Realizing that Dolores intends to destroy both the Forge and the Cradle, Bernard kills her. However, after returning to the Mesa and watching Charlotte (Tessa Thompson) kill Elsie, he loses any lingering faith he had in humanity. So, he builds a host version of Charlotte and puts Dolores' consciousness into her, scrambling his memories to forget the deception. Before laying down on the beach to await Delos forces, he has one final conversation with Ford — except that he realizes the voice is not Ford, but, in fact, his own, leading him to achieve true consciousness.

With the two timelines now synced up, a confused Bernard heads from the beach to the Forge with Karl Strand (Gustaf Skarsgård), who found him, and the new Dolores-Charlotte hybrid (aka Halores). Once there, she reveals her true identity and tells Bernard she's changed her mind about destroying everything. She uploads the hosts' minds to a secret location where they can live untouched by humanity, then shoots Bernard...only to later rebuild him. Her reasoning doesn't entirely make sense, but she says they both need to exist in order to ensure their species' survival. This brings us to where Season 3 picks up.

In the trailer, Halores, Dolores, Bernard, and Maeve are all in the real world, trying to defeat the humans once and for all. "Season 3 [of Westworld] is about exploring a new park," Wright teased in an interview with CNET. "And that's the world outside of Westworld. So in some ways those characters, the hosts, become guests."

In other words, the humans and the hosts are going to switch places. And since Bernard and Dolores are, in many ways, diametrically opposed, he may be the only thing able to stop her from wiping out humanity entirely.