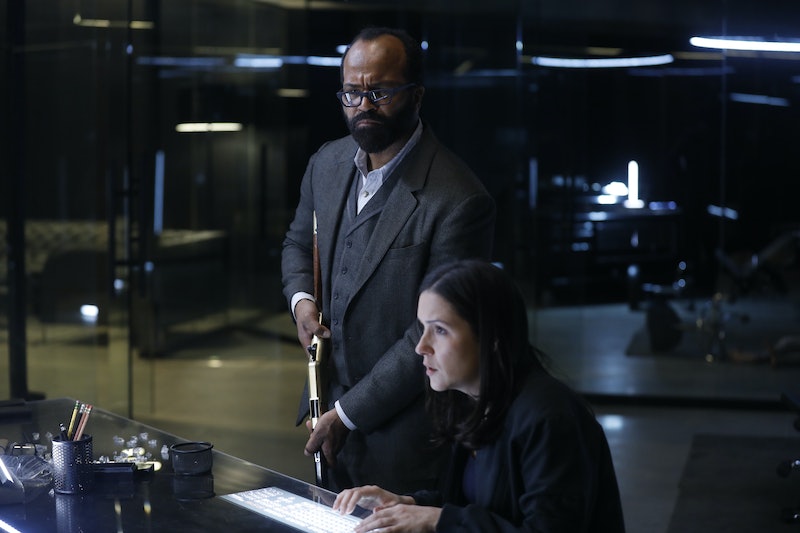 Spoilers ahead for Westworld Season 2, Episode 6. As if fans didn't already have enough to keep track of, Westworld just threw a major new wrinkle into the increasingly complex narrative. How does the cradle work on Westworld, and what is it in the first place? Through Bernard and Elsie's continued efforts to get to the bottom of whatever is causing all of the chaos in the park, they stumbled across a clue in a room labeled "CR4-DL"… and what was inside it may have just served to further disorient viewers who are already grappling with multiple timelines and cloning and new parks and games involving hidden doors.

The Cradle had been mentioned in passing a couple of times throughout Season 2 — most notably when Maling told Bernard and Karl Strand that the rebellious hosts had "taken out" the Cradle, showing them security footage of a bombed-out room — but viewers finally got to see it for themselves in "Phase Space." (Remember, the action in this episode takes place sometime after the first firing shot of Dolores' rebellion, but before the two-weeks-later timeline with Bernard, Strand, Costa, and Maling.)

It turns out that the Cradle is essentially a giant server room where copies of all the hosts' consciousnesses exist. The techs use this server to run simulations on new narratives before uploading them into the park. In essence, it's an entire VR version of Westworld that exists within the actual, physical Westworld.

While poking through a computer after infiltrating the Mesa, Elsie discovered that the Cradle was thwarting all of QA's attempts to reprogram the malfunctioning hosts and bring the park back online. Such actions were so widely outside of the Cradle's stated purpose, but Elsie couldn't tell who was causing it or how it was happening without going to the room itself. Inside, Bernard had yet another one of his disorienting flashbacks, this time remembering bringing something — or someone — to the Cradle. (Now fans know what he did with that red pearl he pocketed; the one containing the consciousness of an unknown human.)

The only way to tell where the commands were coming from was for Bernard to upload himself into the Cradle… which involved a very painful-looking craniotomy, and the insertion of his own pearl into the server itself. Once inside, Bernard woke up on the train into (virtual) Westworld. Walking the streets of Sweetwater, he spied something out of place: a greyhound, the childhood dog of… Dr. Robert Ford. Yes, Ford's consciousness is now living inside the Cradle — that's how he's thwarting QA, and that's how he continues to speak to William through the hosts even after his "death."

But what else can the Cradle do? Can it run simulations on things other than Westworld narratives? How sophisticated and accurate are its simulations? Could the server be used to anticipate human behavior? Could it even be used to… predict the future?

One popular fan theory states that the Bernard seen in the future timeline — the one that washes up on the beach two weeks after Dolores' rebellion and is rescued by Strand, Costa, and Maling — is actually inside the Cradle, being run through a simulation to see what he remembers and extract information from him. Think of it as enhanced, virtual interrogation. But how does that work, given that Maling says in that future timeline that the Cradle has been "taken out"? If the future timeline is a simulation, could Bernard be the one that's running it while inside the Cradle in the present timeline, as a way to predict QA's response and figure out the best way to defeat them?

What else in Season 2 is actually taking place inside the Cradle? Once Bernard enters the virtual Westworld, keen-eyed viewers may notice that the aspect ratio changes to a thinner, wider format than usual. (It feels more cinematic than the traditional television aspect ratio.) The two scenes featuring Dolores and Arnold — the one that opened the season and the one that Episode 6 began with — were both filmed in that same aspect ratio. Does that mean Arnold's fidelity test is also taking place inside the Cradle? If so, why? And if he passes, will Arnold ever escape the server room and rejoin the corporeal world?

Only one thing is for sure at this point: the introduction of the Cradle raises way more questions than it answers… and viewers should be prepared for many twists to come that involve the massively powerful mainframe.